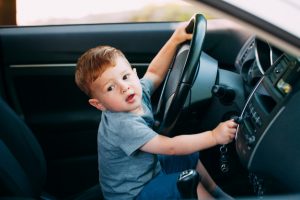 I used to have a student who ran a racket… get into situations where he needed to be rescued. He ran the rescue-me racket

The original incident was that he was locked into his father’s car on a hot summer day. He had insisted, vehemently, that he wanted to play with the car. He was three years old. And of course he loved cars.

After about half an hour of doing noises like cars make, he got bored… but the car doors were locked.

He banged on the doors, on the windows, yelled, and only a neighbor woman saw him.

By the time the women of his household came down to rescue him, he passed out.

He made up a whole big story where he wasn’t smart enough, and he didn’t matter, and he this and he that, but all in all, the common element in all his explanations of what happened was: in the end he was rescued.

He set up his life to have enough occasions to be rescued that this should have been obvious to him… but to this day he hasn’t learned the lesson: the world is not set up to come to your rescue at your will.

So, a few times, he set ME up to rescue him… and for a while I was game. But this last time I refused to.

He still doesn’t know that he was playing the same game as he played when he was three years old. And the odds are against him ever learning it. 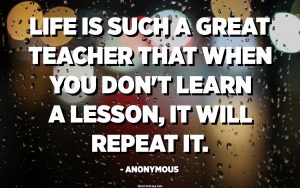 Although humans are learning machines, to be able to learn, you need to see clearly what it is that you want to learn: and in this issue humans are very very very weak. The level of astuteness, the capacity to recognize something for what it is, is .5 percent… Half of one percent.

I am known to say that humanity, had the level of intelligence been this low from the beginning, would not have survived… and, my predictions : it will not survive.

On the individual level: if your chosen activity needs you to be astute, you will not be successful.

Here is the bad news: on a personal level: unless you can start to get what the lesson is, the lesson you didn’t learn in your ‘original’ incident, unless you can recognize it everywhere, unless it becomes like your color in the color exercise, you are doomed. 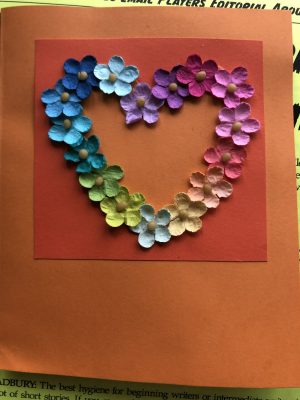 What? You don’t know the color exercise? It is deceptively simple: you pick a color. Not the name of the color, but an actual color. For example, this birthday card was sent to me by Helen.I could pick any of the flowers, or the background.

I pick the rarest color: third from the center to the right.

I look at it, I compare it with other similar colors, I commit it to my memory.

Then I go for a walk. First in my house… then in the hallway… then outside. I am trying to find that same color. Most are similar, but not the same.

Eventually, after several days, maybe even weeks, I can recognize MY color anywhere… the shadow on a flyer, the dude’s tie on the TV series. Not the whole tie, just the stripes on it.

And now that I can recognize it, tell it apart from all the shades of whatever color that is that I have distinguished.

So is with my racket. My learning. My missed lesson. How many times I have missed it? I missed it every time until finally I didn’t, back in 1991. Most people have tens, maybe hundreds of occasions, hundreds of missed opportunities.

You cannot recognize that which you haven’t distinguished.

I am talking about distinguishing your learning, your lesson, your special brand of entitlement where the rules of the world don’t apply to you.

For the first time I have a married couple in my advanced courses.

She wrote to me for advice. I answered: patience.

Which means: don’t react the way you always react. With fear, panic, or argument. It had nothing to do with her… It was all his racket, the same incident replayed that has stunted his life since he was 3 years old. Robbed him of happiness, robbed him of peace, robbed him of a good life.

Everyone has a racket… me too. I am still, occasionally run a mild version of it… I have learned how the world works and even though the racket wants to run, I manage to tame the beast… and not get killed.

Want to know how MY racket works?

Answer back… I’ll share it. I promise you’ll get an insight about your racket… if you do.

OK, this email turned out to be soo good, that I am re-publishing it as an article… here.