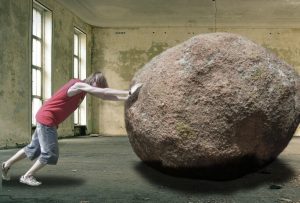 Yesterday in the core group meeting, that happened to be also our Getting Guidance from our Future Self, something magical and very educational thing happened.

I recommended that the students ask each their Future Self if they, indeed, in the future have followed the A to B project we invented in the sessions.

I cannot talk to their Future Self, so I didn’t know it either. So we were all very afraid…

And the answer was yes in every case. Big relief.

And then the students got encouraged and asked for details about that future, and that was very satisfying too… now you know. 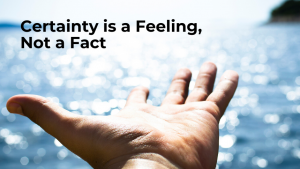 When you know where you are going, you know what the end result looks exactly, they there is a certain glow to you. The glow of certainty.

Certainty is a unique state in that you really know, even in spite of all appearing hopeless.

It is also different from ‘I know’ knowing. Back in 1971 my father paid the downpayment for a one-room efficiency apartment for me but didn’t think of giving me money to pay my bills and eat too…

I was still a student, and was literally starving.

One day I found a pickle jar, and I was sure, I knew that I was going to get back the dollar deposit for it in the grocery store, so that I can go and visit my parents and finally eat something.

Turned out I only got 70 cents for the deposit, and I cried all the way home. I didn’t have the dollar for the bus fare. (I say dollar, but it was the local currency… this was back in Hungary)

Then I found an old crust and some cheese spread dried into the tub. I put it on the crust, put it in the oven, hoping that it would become edible.

Then the doorbell rang, and two of my friends charged in, went to the oven exclaiming: Something smells good!, and ate my bread crust.

I didn’t have chairs yet, so I collapsed to the floor crying.

Later that night they showed up with a casserole for me… but remembering that day still makes me remember that I don’t know. I don’t know anything. No certainty. Not about the price of anything, not that what I cook I can eat. 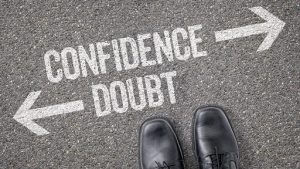 And yet, today I am able to have certainty… about futures I dream up and work towards.

I am not efforting, I am not trying, I am working towards.

It wasn’t always this way… I used to be plagued with doubts, fears about myself, about the future, about what I can do and can’t do.

Much of it changed with the introduction of an energy I play now 24/7 in my living room. If you listen to my recordings, you can hear the birds in the background. Yeah, those are not birds, that is my energy, the effortless abundance playing on a mini mp3 player I set up six years ago. I had to swap the micro card to a new one, otherwise it is playing flawlessly in the background, helping me be calm, collected, fearless, and never try, never effort, never be needy, just do what I need to do to make a living, create new products, serve people, and in essence have a good life.

And since I have distinguished soaring it’s even better… faster, and more effortless.

That doesn’t mean I don’t work. Of course I do. But I don’t effort. and I don’t try.

I do experiment a lot, but I call that attempting… not trying. Big difference. When a trying doesn’t work, you feel like you failed.

I never feel like that. My attempts are all experiments… some work, some don’t, and no emotional involvement is happening.

When you can enter soaring, the state, you experience favorable circumstances, but that doesn’t mean that life is a one and done now.

Soaring will not give you a permanent vacation.

It will just help ‘grease’ the way… no kidding… as will the complete mind-swap of the Effortless Abundance Activator audio… especially if you learn how to let go of greed, and forcing, and all the ugly things you bring to life to repel what you want and make everyone miserable around you, including yourself.

I know there is a rule not to sell two things in one article, but I am going to violate it this time.

I’d like you to look at the Effortless Abundance Activator System, AND the Soaring Method: they are a perfect ‘couple’…

Now, if you think that either of them work without you investing time, and intention, and learning, you will be sorely disappointed.

I had this dude get his measurements the other day. He had zero predatory genes, and I recommended that he gets his predatory genes adjusted, so he won’t be so dull, listless, ambition-less any more.

He kept on asking for suggestions (for free) so I kept saying: have your predatory genes adjusted.

> Thank you Sophie will definitely consider 🙂 I also have difficulty
> trusting people and knowing how to follow my intuition. Is this something
> you can help me with or point me in the right direction please?

to which I answered: I hate to sound like a broken record… so I won’t repeat what I have said. (have your predatory genes adjusted)

He got offended, and unsubscribed.

Don’t be like that dude… Maybe it was language barrier, but I think it more  likely that it was like he wanted me me to do for him, instead of him doing for himself.

None of the energies, none of the methods I teach work that way.

They are all co-creative. If you don’t pull your weight, they don’t pull theirs either.

Some 30 yeas ago I learned something very important in Landmark Education: relationships with people, with work, with things work never 50-50. They are, instead 100% and zero%

If you bring all of you to my programs, to my energies, to my activators, remedies, methods, they will give you a life you can be so proud of, no one will be able to catch up with you. No kidding.

But if you start out with having your hand out… you’ll get exactly zero. Zero….

OK with that caveat, here are the links:

Get the Soaring method
The Effortless Abundance activator:

Get the effortless abundance activator