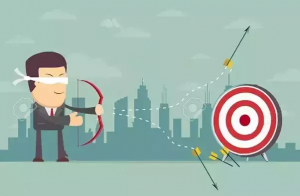 One day a Zen master told his students that he was going to teach a new technique of shooting an arrow.

He instructed his students to cover his eyes with a cloth and then he shot his arrow. When he opened his eyes, he saw the target with no arrow in it and when he looked at his students, they looked embarrassed because their teacher had missed.

The Zen master asked, “What did you learn?”

They responded, “We thought you would show us how to shoot at the target without looking.”

The Zen master smiled, “No, I taught you that if you want to be successful in life, don’t forget the target.

So let’s see why this is the one thing…

Humans have a number of perception organs or sense organs. Information gotten without using these organs are called extrasensory perception or intuition, and are rare.

With all our perception and extrasensory perception, humans are limited to be able to perceive and make sense of only 1% of what there is. 1%. Roughly.

With thinking: you can access more. About double of that. With intuition about 10% of all there is to know.

What humans call thinking isn’t… Re-shuffling what was already seen, coming out with just variation of the same, isn’t thinking. Real thinking is very rare: less than one in a billion actually ever think more than a minute in a lifetime.

Real thinking, in this context, is penetrating the area of reality that cannot be perceived by the perception organs, sensory or extrasensory.

I happen to have access to thinking and extrasensory perception. And I use them extensively.

Last night in my ‘conversation’ with Source…

Last night in my ‘conversation’ with Source, one of the questions came up, not the first time, what is Source and how does Source know.

I have read three authors where I got the concepts that seems to agree with what Source says: Michael Talbot, Lynne McTaggart and Wallace D. Wattles.

Namely: that there is a zero point field that is in all and through all.

So last night I checked with Source if it is, in fact, that ‘thing’ and the answer was ‘yes’.

So when I ask if this is true, you compare what I say with what is, what is a fact in reality? Yes, said Source.

Then I was really curious if what Source knows is all knowledge. Yes and no… hm.

Source says that there is no knowledge outside of humanity… for knowledge to exist, there needs to be a knower, a recipient. Just like the zen question: If a tree falls in the forest, and no one is there to hear it, does it make a sound? The answer is ‘no’. Sound also requires a ‘recipient’ to register noise.

Interesting and confusing at the same time. The question comes up, hesitantly at first: does that mean that my answers are coming from humanity’s knowledge? ‘no’.

And yet… given the nature of our communication, what gets known through my conversations with Source depends on my questions… I can only get three answers: yes, no, and I don’t know.

So in those ‘future self’ sessions I acted as translator, and used MY thinking capacities AND Source to guide people.

But there is a serious bottleneck, a fly in the ointment, even if and when one gets an answer from ‘future self’…

The fly in the ointment

Who are you today?

We can safely say that who you are today is the physical manifestation of your habits.

Habit is essentially a behavior, inner or outer. A behavior that you regularly perform to a trigger. Like Pavlov’s dogs salivating when the bell is sounded… You have many triggers, and you do the equivalent of salivation to each…

In essence, when I measure your integrity I measure to what degree your word and your behavior coincide.

When we look, all habits have a visible and an invisible component.

In the work I do with people, we overemphasize the invisible component: your selfish gene, your self-serving nature. Your past decisions. Your over-reliance on your feelings and emotions. Your so-called needs. Your personality. Your preference for easy, smooth, and unambiguous. Your overwhelming desire to get off the hook and stay off the hook.

It’s possible, but not probable.

Unless… unless, of course, you do it the ‘scientific’ way.

So what is the scientific way?

It has two components, both will feel unnatural to you.

The Anna Karenina Method, where your focus is on removing habitual ways of acting and thinking, to arrive to a very small number where even the slightest change will make a big overall change.

If you have a 100 habits, and you probably do, then any new habit added will not make a dent in who you are.
If you have three habits, changing one, or adding a new one will make a huge difference.

In Zen, my understanding, one focuses on doing things in the way as one chops wood and carries water, chipping away everything else. The mindset that applies to everything in that life. 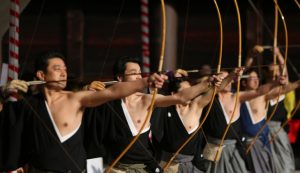 A man who, a successful general, retired from the army. He was tired of ‘the world’. To escape the world, went to a monastery where he was training to become a master archer for 10 whole years. That is all he did: practiced the art and science of archery, and he finally, after 10 years, was very good.

On his tenth anniversary in the monastery the abbot came to him and told him that he was to go into the world. He wasn’t happy about that, after all he came to the monastery to escape the world, but the abbot’s mind could not be changes.

So he left, and with nowhere else to go, he headed to the village where he was born and raised… quite a few weeks travel from the monastery.

As he was approaching the village a strange sight received him: nearly every tree, nearly every wall, nearly every surface had an arrow on it, an arrow and a bull’s eye, the arrow smack in the middle of it.

He got curious and angry, after all he just spent ten years to get good at archery, and someone outside, in his home village, is besting him.

So he asked to meet the archer responsible for all those bull’s eyes.

He was told that the archer will meet him next morning by the river. So he went and nobody came… 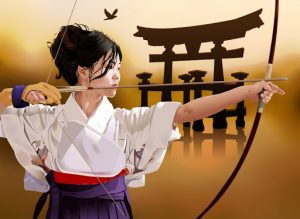 There was this young girl playing nearby… but no archer came. He was about to leave when the little girl approached him and said: You seem to be waiting for someone… Go away, answered our man annoyed. But I was told to come here and meet someone… so maybe you are waiting for me, said the girl.

I am waiting for the person who is responsible for all those bull’s eyes around town.

That would be me… said the girl. 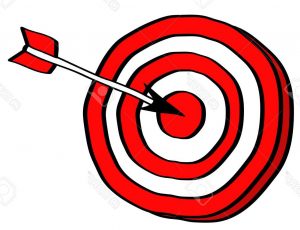 You? said the man stupefied. Then explain to me how you get a perfect shot, a bull’s eye every time you shoot an arrow!

That’s easy, said the girl. I take my arrow, I shoot it, and wherever it lands, I draw a bull’s eye around it.

Now, why am I telling you this story? Because the man and the girl in the story represent two dramatically different mindsets that will define the quality of your life.

The man lives in the right/wrong paradigm where all he can do is tell the world who he is.

A world to word way of looking at life.

The girl lives in the ‘it ain’t nothing till I call it’ paradigm, where she makes all she does perfect.

When it comes to habits, whether in thinking, worldview, or doing, the only way to get a new life is to become the seasoned umpire, where you call it and it is so.

Where you have perfect integrity in every area of life… a real rare phenomenon. 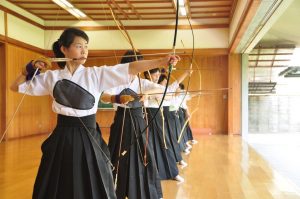 Unless your word has power, ultimate power, you won’t have power: you’ll have given it away to circumstances, urges, needs, and others… And you’ll live your life as a puppet… not a cause but an effect.

In all my programs the training is about what you say: your word.

Unless your word has power, all your habits come from powerlessness… and your future will not depend on you, it will depend on circumstances… you’ll be like the leaves blowing in the wind… you’ll land where you’ll land, not where you would want to get to.

So if I were to suggest one habit to work on, I would suggest to work on your integrity, to strengthen the power of your word.

That is the source of everything…

No matter which course of mine you take, that is what we are working on, through different lenses.

First you see how what you say or said influences what you see, how you feel, and what you do.

Whether you do The Soaring Method, or the Integrity Workshop, or The Playground, or any of my other courses, like the Saturday webinars… you’ll find that 90% of the thing to do is clarify and identify, accurately, what has been your Word…

Unless you know, unidentified Word has the ultimate power… because it is hidden… like the undertow.

And once the undertow is identified, you use the 10% to formulate the Word and to empower it so it actually manifests.

The Universe is responsive… why? I don’t know. But it, in a roundabout way, The Universe responds to your WORD.

If you are new to this work, I recommend that you listen to my weekly approximately one hour long conversation with Bonnie, who is also new to this work. Every week we work on and around one distinction. It is light, it is enjoyable, and it can gently tug you towards a place where you can start owning what you have been saying.

Get my new podcast that builds a foundation for power
The audios are delivered on my mobile app. If you want the ‘podcast’ but don’t have a smart phone, I may make an exception for you… eventually the app will also be available on the desktop…

It is at the lowest price it will ever be… the price of a cappuccino a week.