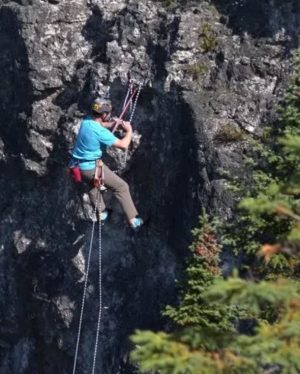 Part of being a good coach is to experience the scary stuff the client is experiencing or will experience on their journey… so I can have compassion, and maybe some tools to ease their bad experience and help them through some obstacle.

I was never a fan of new things… I am not an excitement junkie… not me… sorry. And now that I am old, it is even less tempting… and yet, it takes me less deliberation nowadays than it used to, to ‘jump’.

Jumping off the diving board is a very good analogy… but even getting into the pool or the lake. You don’t know if you can survive.

In fact, all fear is fear of death… The interesting thing about me: death itself doesn’t scare me as much as the path to it, the pain, the horror, the experience.

OK… even just writing those few words… … lead me through the minefield of  experiences… mouth dry, palms sweating… ragged breath, my heart threatening me that it will stop, massive pain in the upper arms. 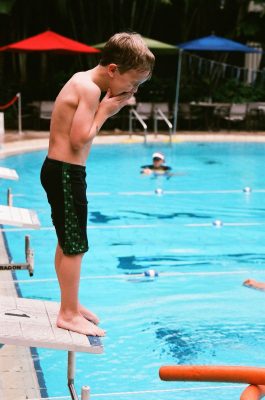 OK, unless I am willing to go through those, I will never be able to do anything new, unless I am dragged kicking, screaming…

I prefer going on my own two, thank you very much.

And I have been… and the fear and the symptoms don’t get friendlier… but I am getting stronger.

I am going to digress a little bit: one of my easily scared students just sent me an email that clarified something I wasn’t aware of:

Last Monday when I wrote out the statements for the Integrity homework, I had written something that hit me all of a sudden just last night. I said that I wanted to be a ‘specialist’ in ‘the new field’. I did not say I wanted to start a ‘New field’ Clinic, or add ‘new field’ services. I said I wanted to be a specialist.

That hit me all of a sudden last night – and it felt so right – it made my heart sing. I got so excited that I was going to become a Specialist.

I would never have said specialist – ever. I would not have ever considered myself an expert, or specialist in the field, even if I managed to get unstuck and start that part of my business. Why I typed those words was a mystery to me. But I believe last night I discovered what clarity means. I think the adjustment allowed for clarity. Finally I know what clarity means, with all the focus of a laser. Still without the forcing. I even began having dreams of me doing the procedures on patients. Not ‘dreaming of’ doing, but it does seem to be infiltrating my dreams.

Before the predatory genes adjustment, when you would mention doing exercises to get clarity, I dreaded it. I pretty much knew I was going to pick something to work towards, call it ‘clarity’, and would only feel half hearted in the process. I would not have had the true clarity. And I read about clarity in so many books, so I knew it was important, but I knew that I was not going to be clear as to what I really wanted. Now I am so crystal clear about being a Dry Eye Specialist. An Expert. And I know I will accomplish that. 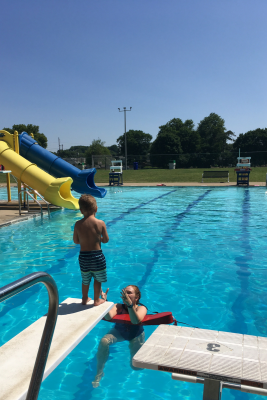 OK, here is what I saw: if fear is blocking you to do something that you are capable of doing, equipped to do, they fear may come from the too many or too few predatory genes… She is. And this happened as a result of the predatory genes adjustment.

But if the new thing is totally outside of your abilities, then the fear is a guidance device: saving you from certain failure.

This is why I advise people to start a project or two in the direction of their fear… and gain some footing, gain some confidence, see that in fact they have and are developing abilities to succeed.

This is a very important distinction. The quality of the fear, the amount of fear is the same either way…

But if you are jumping in on the deep end of the pool… and can’t swim, have never swam, you can’t be confident, you are stupid… And stupid as the stupid does. 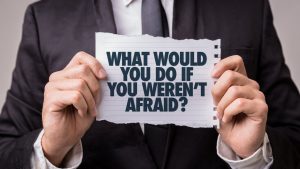 Starting a project, small, big, immaterial, still awakens the same amount of fear, but the pool is not that deep, and you can read the bottom with your feet and stand up…

You almost never have to drown…

When back in 1982 I decided to go to Israel, illegally, mind you, I already had two master’s degrees in architecture and structural engineering. I had also 11 years of working experience. I already spoke 3 foreign languages well. Not Hebrew. I also didn’t know anyone in Israel, except I had a second cousin who I didn’t know, and didn’t expect to want to help me.

But I knew that if it doesn’t work out, I can go to an English speaking country and make a living.

So I was confident that I was not going to imminent death… And yet, the fear was enormous.

I also left, defected, therefore I could not say good bye to family, friends, anyone. I also had no money: the money I sent ahead of me ‘died’ in a head-on collision my friend who carried it died in a few weeks earlier.

I’d sold my condominium, akin burning the ships to cut off my way back. I said I was going, and by gosh, I was going.

Did life work out? Not how one would expect… but all in all, I am doing what I was meant to do, I live in a beautiful place, I make a living… so what else can one want in life?

So what am I saying? 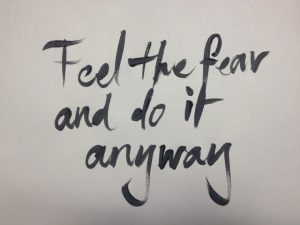 The fear is not different when you have no business to do the new thing, or when you are uniquely qualified to do it.

Fear comes from the limbic brain, and it is not intelligent, not discerning, YOU have to, with your prefrontal cortex, the organ of choosing and making decisions… and not surprisingly the organ of self-knowledge.

If you are delusional because you listen to your feelings about yourself, then you always jump in the deep pool… barely making it out with your skin intact. I have people like that in my sphere.

Nowadays, luckily, I have more people who think with their prefrontal cortex, instead of thinking that the feelings, the emotions are an accurate descriptor of reality.

I am thinking of recommending it to my clients who would benefit from using it, it’s like having a really private website, a really private Facebook group, but without the shenanigans of Facebook… And yup, you guessed right in one: the strong fear is there…

I would laugh if I could…

Do I get a commission? Somewhat. Not money but more lairs. But either way, money has never been strong enough in my world to counter fear.

And now I am even getting a headache… stomach ache… ugh.

I did get myself a few of those SocialLair lairs… although I haven’t gotten past paying for them.

It seems to be ideal to do private coaching, so that is the first thing I am going to do there.

How many of you would do really well with having a social lair? Only a few… It is for entrepreneur type people, although I can see it could be used for family communication, that is private… really private.

So what should you do now that you have read till here?

If you are curious, here is the page where it’s sold… https://yourvibration.com/sociallair

It shows 33 ways to make money with it, to use it, I see about ten of those apply to me.

I am not sure how much it cost, I think just one lair is $35 a month. I bought eight myself… I will use it for private clients… one each, and for group coaching, and one for a pet project of mine… But maybe I’ll put my blog there too… who knows, haven’t decided yet.

Maybe I’ll do a blog that I want only some people to read… because whether you know it or not, some of the things I have to say would be frowned upon by the powers that be… so I don’t say it, other than in my Sunday calls… that are private.

I have started to do a private coaching a week or so ago, a specific one, where I work with people on the seven things they have to have if they want to be really successful in the business they either already have or the business they plan.

So, if you look, it is a ‘project’ for now, I only jumped into the shallow end of the pool… lol. I liked the imagery. No fear, no danger of drowning, and thus is highly enjoyable… splashing around.

If you have a plan or have a business already that could use some serious growth, contact me and we’ll talk if you’d be a good candidate to this coaching.

Contact me by email and tell me about the business.

Upon contemplating this article, I am attempting to answer this question differently than I have ever answered it before.

You see, human have a part of the brain that is responsible for making decisions, for responsibility (owning what belongs to you) and choosing.

I have found that some of my programs, the hero program, the Integrity Workshop, and even the Soaring Method starts strengthening the person’s ability to make decisions from the prefrontal cortex, the part of the brain that only humans possess.

And the stronger that ability becomes, the less the emotions define the person, and more their conscious decisions. And the higher they are on the evolutionary ladder. And the more they are able to tell the difference of imaginary danger and real danger.