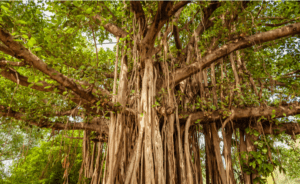 For 17 miserable years I was an architect in three countries. Unfortunately I brought myself with me…

I was, for a time, part of a team that introduced a new building method: building from the top down…

I won an architectural competition with it, I also won an award of excellence for a building built that way.

The method may work in architecture, and it definitely works for the fig tree… 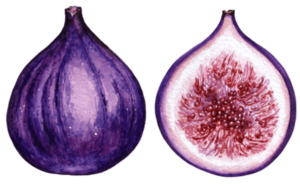 You see the fig, the fruit finds a rotting branch on the top of a tree. There is everything for life there: light, air, and moisture in the jungle… whereas at the floor of the jungle it is dark…

The fig, the most frequent plant in any jungle chooses to propagate this way… 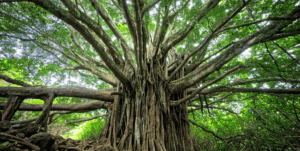 Once it is established on the top, it sends long roots to the ground… This is why the bodhi tree looks like many trees: it is.

The reason architecture was torture for me…

Source says that I can do it, but it is like that part of my brain is missing… 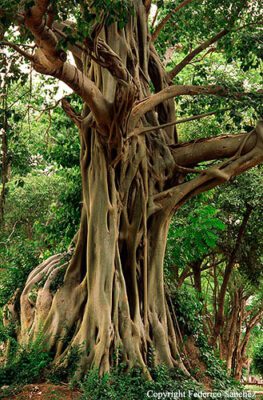 So after I read the article on figs and fig trees I looked at my teaching, and found the same issue I had found with architecture: The reason my teaching has been only as effective as it has is because I have, like the fig tree, start at the top, and attempt to grow roots by sending them to the ground that I hope is fertile… people’s brains.

I was born unwanted. And I inherited 30 DNA/spiritual capacities from my father.

I didn’t know that I was also on the autistic spectrum… relatively high functioning, but socially awkward nevertheless.

What I knew is that I didn’t fit in, that I wasn’t going along, getting along… that I was an outsider.

I now know that that experience is not unique to me. You don’t have to be special in any way to not fit in… You just have to be standoffish…

It is not rare. Half of the people living feel that they don’t fit in.

When you are an outsider you spend most of your time alone doing your own thing, even if you are sitting in a class.

I am sharing this to explain, maybe justify how this isolation and this utter unfamiliarity with how other people operate, kept me ignorant to where people are, where people look, and what would be the level where they need to be trained like a ‘normal’ seed that grows from the ground up, to grow into a healthy tree.

In essence I lived in my head, and didn’t see reality.

I have been working with people, teaching them, training them as if they were figs…

And the past month or so,

ever since I started to have the Big Bundle in my ear all day,
and adjusting and re-adjusting people’s DNA several times a day by necessity

I have started to look from earth/soil level… instead of looking from the tree-top level.

And to my utter horror, looking from the soil level, I realized that people, like me, have been looking in the mind, in unreality, and have, maybe, never looked in reality. How ‘almost never’?

Less than 1% of the time. And even then dragged what they saw into the cave of the mind, where it was explained away.

And that makes people’s results obscenely poor, and they don’t even know the why.

Here is for example, an area of life where I just discovered that the problem is universally misrepresented.

The worldwide epidemic of obesity.

What nobody says because nobody sees or what nobody sees money in is this: you are undisciplined. That you are the dog that is wagged by its tail. That you have no power to direct your actions, your attention, to where you look, to what you see.

I just looked at some supplements I have bought that didn’t work. Huh? I didn’t get slim. It didn’t slim me down. It didn’t stop me from putting food in my mouth. Instead: It was a disappointment.

Results are dependent on my ability to choose. My ability to cause my choice, instead of being jerked by all the becauses…

All a direct result of not being cause.

Interestingly, earlier generations, different cultures, had that gene on… judging from their slim figure.

We could safely assume that the capacity, the causing gene, was successfully turned off through acculturation. Through consumerism.

And humanity can be trained, as a whole to not even be able to use their attention/awareness to see reality so they can act from facts, not from fiction.

Some 10 years ago I used to hold attention calisthenics classes. The students who could do the moves, direct their attention, use it to move their self, were all empaths… empaths are more aware what things feel like.

But to my dismay, the moment they opened their eyes after the exercise, they did what everyone else did: looked in the mind, in some ideal, some perfection to direct their actions… and their attention never even skirted reality.

Human, the talking animal, just like it says in the Bible, named things, and eventually can only see what they named.

Although the eyes see, the conscious brain does not. It only sees when that thing is named.

I can catch myself eating… I just counted the sugar free candy wrappers next to my keyboard… Nine. I don’t remember eating any candy! Not even one.

That is one of the ‘loopholes’ in the design of homo sapiens: a human can be trained to act unconsciously to the specie’s detriment.

This loophole is the enemy… Where the conscious brain, the person, isn’t even participating in the action.

The attention is taken out of the conscious control of the person, and the experience is ‘being like a wind-up doll’ or a computer animation in the Matrix.

The root is this ability that is blocked by this state of hypnosis, or trance: your ability to be awake and to direct your attention to look in reality.

For most of humanity the first hurdle is to wake up.

It’s a lot like it was for Neo in The Matrix… not necessarily without its challenges.

Noticing things you don’t want and stopping yourself from reacting automatically, neither for nor against… taking charge of yourself. Consciously.

For many, the connection is severed, and unless you can regrow that energetic connection, it is now permanently severed.

For most the connection is just put to sleep… and if they ever want to become human again, it will take some work to restore the connection to the degree the individual is willing.

Consciousness looks in reality… you have been looking in its reflection in the mind… the meaning, the narrative, the story, as if it were both true and real. It is neither. You live inside the meaning of right/wrong, good/bad, moral/immoral, all mind-stuff, none of it exists in reality, none of it concerns consciousness. Consciousness that you are cut off from.

Nothing to fix, no place to get…

What is there is peace… consideration/looking… and choice.

Selecting, FREELY, free from the jerking energy of anything, selecting, freely, AFTER consideration. Choose to act, choose to not act.

And live with your choice…

Spock, from the original Star Trek, was a model of a human who wasn’t jerked… Who looked in reality… who wasn’t swayed, enslaved by emotions…

He was effective, enjoyed life, and ultimately, albeit he was acted a little stiff by Leonard Nimoy… he is what a human BEING looks like, behaves like, acts like. Human being, the next evolutionary stage for homo sapiens.

Now, if you missed where I said:

this is only possible for someone who has the ‘causing’ gene on… without this you can’t… can’t even fathom W.T.F. I am talking about… I can hear it in the echo of readers and some clients!

Without the ‘causing’ gene you can’t…

Until January 2 midnight I’ll turn on that causing gene and adjust three others… I adjust your DNA for you for $45.

You’ll have a chance to experience the difference for about 3 days. Then the gene will turn off… but you’ll know.

And then we’ll talk again…

Here is where you can get the DNA adjustment:

Get your DNA adjusted so you can experience the difference

PS: If you had your DNA adjusted back in September…

…but didn’t pay attention, you can ask me to adjust you again, for free, so you can now consciously experience what is possible for you.

PPS: Every marketer learns that people act emotionally and then justify their actions logically…

Emotional action means: you never caused your action. You abdicated your power to choose to some unconscious emotion… or urge. Hunger, lust, greed, jealousy, anger, whatever.

And that is why you are fat, ineffective, and a sheep. Because your emotions are very easy to manipulate… and you are manipulated 24/7. Some more some less, depending on how much time you spend exposed to media or other people.

I am not safe from this manipulation; nobody is. I just know it is happening and I protect myself, when I remember to protect myself.

When I remember myself, as Gurdjieff would say.

I still fall into that induced trance often enough to know the induction is constant. I am fat, I buy stuff I don’t need.

Share, if you want, what this looks like in your life… thank you.
the link expires at midnight on January 2.

PPS: If you want the full benefit of the DNA adjustment…

…you have to learn to wake yourself up as often as you can remember. When you get your adjustment, I’ll email you the percentage of time you are awake at this juncture… Your job will be to increase that number.