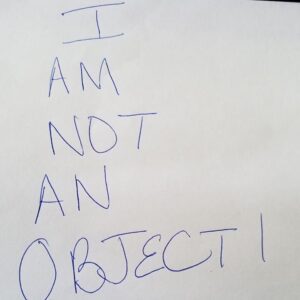 Everybody resents being treated like an object… But the truth is: YOU consider yourself an object… by not using what would make you a person.

Are you a person automatically? No, you aren’t…

What is the difference, the ONLY difference between and object and a person?

We, most of all humans live as if we were an object in a world of objects.

And if I asked anyone, why, they wouldn’t know. My students, my teachers, philosophers, everyone. No one knows.

And if you don’t know something, if you can’t recognize it even if you trip over it, then, of course, you won’t use it, you won’t strengthen it, you won’t even want it.

It just so happens that common parlance uses a word for that sacred phenomenon that means something bad, weighty, and undesirable for everyone.

This is how language was designed: to make you an object. Why? An object is easier to manage. An object doesn’t have a Self. It won’t take care of itself. It can be molded, managed, suppressed, oppressed, lead to slaughter… so yeah, the powers-that-be designed and use the language to enslave you and reduce you to an object.

And you may know it, you may feel it, but you have no idea what you could do about it.

Even after I teach you.

Why? I guess it is easier to be an object and complain about it.

And if it is so, you don’t deserve to be called a Man… because you aren’t. No matter how strongly you emphasize that god created you after its own image… OK, you’ll probably say HIS own image…

But you are missing the most important component of Man… And that is what this article is about. That important missing component.

So when I look how you live, you base your life on Comparison

…less, more, better, worse, smarter, stupider… Treating these all as valid measures… but they aren’t.

There is no comparison in reality, and when you engage in comparison, you are engaging in imaginary stuff. Like stirring crap thinking it is chocolate cream.

Now, that I have made 70% of you to leave… because you cannot be, because you lose all your power when anyone says anything you don’t like, let’s buckle down and look what is underneath comparing.

I finished reading a novel, the second time, yesterday.

It’s part of a series, and it’s a thriller. Thrillers, detective procedurials and lawyer dramas are my favorite genres… And when there are no new books from the authors I follow, I re-read some of their books I have read before.

And sometimes a guidance prompts me to read something… like now.

The book is about a guy who is obviously a psychopath or sociopath, I don’t know the difference. Someone who enjoy causing pain, mayhem, and doesn’t care.

His whole world is about himself, what he gets, what he didn’t get, what he should get… familiar?

And we all have some of that in our constitution, some more, some less.

In my Starting Point Measurement I measure it as the score on the narcissistic scale… they are exactly the same.

So what I was guided to see in the novel is this: the issue is that the world doesn’t, hasn’t given you what you should have gotten, so you punish the world and then you take what you want.

In 100% misinterpretation of Hillel’s lines:

If you are not for you, who is for you?
If you are only for yourself, who are you?
And If not now, when?

Hillel means: give to yourself what you need, what you want. Be for yourself, provide yourself with what you need. What seems to be missing. But only the kinds of things that you have dominion over…

But when I ask people what’s missing, they always look at what they have NO POWER OVER…

…so they cannot provide it for themselves, they can wish for it, but it comes from outside of what is theirs to give… so wanting it is ‘desire to receive for the self alone’… the only evil there is.

Even if it looks and feels like it should be, or should have been given.

And you keep on demanding and be miserable for not being given… And complain, and suffer… and feel resentful, revolt, use it as an excuse.

And life, You, remain the same old, same old, and you have an excuse. I wasn’t given this or that.

And everybody will benefit. This is the true ‘desire to receive for the sake of sharing‘.

You see, you are barely tolerable as you are. But once you provide yourself what you say is missing, you will be whole and complete, you will be a source for the world… and the world will be better off for having you.

So consider that you were never slighted. You got what you got… What you got wasn’t what you expected, wasn’t what you wanted. So you complain. You suffer. You act like you are a victim. But you could, maybe? work with what you’ve got… and if you want more, work for it. Create it. Develop it. Don’t expect it from other people.

The underlying invisible dynamic is always greed and sometimes vengeance. Wishing the other dead. Making them feel bad about themselves.

I know this is not what you wanted to hear.

I know you have your hand out… You want me to justify for you that you have been mistreated, slighted, and you are justified to hate, suffer, and not produce, not contribute to the world, to other people, to never actually do anything for yourself. After all aren’t you other people’s problem? And so you are. And you are not loved, not cared for, because you are not pulling your weight.

So what is that magical single ingredient that separates objects and persons?

It is taking complete ownership over what belongs to a person.

Their words
Their actions
And Their attitudes

And no matter how many time I teach it, no matter how often I activate the capacity to this attitude: people refuse, simply refuse to even look that way.

You insist to living as an object in the world of objects.

But why? You want others to give you what you want… and you are unwilling, simply unwilling to own that IT IS YOUR JOB… if you want to be a person.

You want to be TREATED as a person, but you don’t want to BE one.

If you want access to the power of a Man created to the image of ‘God’, ‘The Creator’, you need to take ownership of what belongs to you.

Ownership gives you access to the power of Man…

You need to own it, occasionally wrestle it away from WHAT wants to hold it. But you have been denying the power… and you’ve been miserable pretending to be FINE.

Pretending that if other people just gave you what you want, what is your due, what you ‘deserve’ you’d be happy.

No. It is impossible to be happy when you live a lie.

In common parlance this ownership is called responsibility. And when you hear that word, you hear guilt, blame, and you want nothing to do with it.

So I am going to rename it to ‘ownership’… it is a DNA capacity that you can turn on for yourself, and I can turn it on for you.

Obviously at this point even people who have the capacity open will consider this whole idea ludicrous, or wholly alien.

I held a webinar last year for people for whom I turned on the capacity… It deals with how to take ownership through asking questions, pointed questions.

And people thought asking questions is enough for a few times, and dropped it.

So I can safely say: people are resistant and choose to be unhappy, complaining, and a victim, instead of being powerful.

If you want the recording of that webinar you can. Just so you know, I will hold off on the Communication Workshop until there are at least a few people who can start using their ‘god-given’ personhood: and do what a person can do.

Until communication is not available… no matter how much you want it.