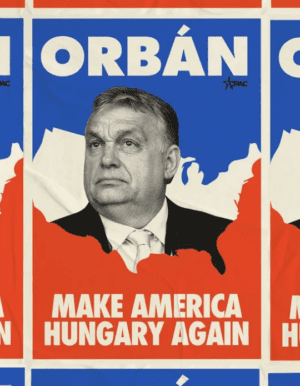 It’s not communism or socialism that is the enemy of freedom and prosperity. It is authoritarian systems.

Authoritarianism=my way of the highway.

I have lived in socialism. People may be lazy there, but creativity, thinking differently, individuality, ability and productiveness is not penalized… Maybe Russia was different. I lived in Hungary.

At this point Hungary’s system is really kleptocracy… stealing power, stealing stuff, stealing rights, stealing freedoms. We are seeing that in the USA happening… I hear that they are copying Hungary, a tiny country in the middle of Europe.

But in authoritarian systems who is calling the shots are the freeloaders. The looters, the moochers, the people who want something for nothing. The enemies of thinking, the enemies of originality, the enemies of production.

I know, there is some overlap, undeniably.

But not enough to kill a society and condemn it to no prosperity.

And the utopia of Ayn Rand, where they organize, go on strike, allow the non-producers to destroy themselves is that… a utopia.

People, who are producers, aren’t skilled, and aren’t even interested in redirecting their attention to politics.

At least I don’t think so.

I certainly am not.

And people who have never been producers, that means most people, the eight billion, are fighting for power, and want everything for nothing.

The only thing that produces value is production.

The producers are the people who create the opportunity for production… the worker bees are NOT producers.

Although they produce value, but to be a producer, you need to be the source of the production.

But who the system or authoritarianism wants to kill are the producers… the producers on whom all prosperity is based.

An authoritarian system wants people to not think… just repeat the party line.

I just listened to an interview that says more. Orban’s process of turning a whole country into an authoritarian regime is what they are copying and what we see here in the United States today.

The trick is to change the laws, the constitution, the legal bodies, etc. and then you can do anything and it’s legal.

But if you cannot tell the forest for the trees, which is 99% of everyone… get ready to live in a world of 1984. The book.

Now, the question is: can you live and be OK, maybe even fulfilled, no matter what world you live in?

Yes, of course, but not how you are… How you are is a spoiled brat, entitled, and crying for the bottle.

In Sunday’s workshop I likened the attitude and the behavior to the behavior of chicks in the next: they have their beaks wide open and they make loud noise to get the worm.

The only difference between most people is the kind of moves they use, noise, wiggle, pretend, lie, beg, talk a lot, to get that worm they want or they need… Work? Producing? No. None of them.

Most people hate Ayn Rand… because she saw that that is how people are.

Of course this wasn’t always this way, that 99% of all people were takers, moochers or looters. We, humanity, needed to get to a level of production where most people didn’t need to think, didn’t need to produce to eat.

What bothers ME most, is of course how they bring that same thoughtless attitude to the work I teach to do.

They, actually, think, that there is no ‘doing’ in this work. They, you… yeah, you!

The same no production is needed is ruling people… They pay me their money, come to class, and they think that is all it takes to be happy, wealthy for life.

I come from a different personal culture, somehow, even though both my brothers are exactly like you.

Not my father. So maybe it IS in the genes.

The Original Design of humans is to LOVE working.

This is also part of the hungry chick in the next syndrome: you do all the things you do to get the worm… The worm is the reward to all your begging, and other shenanigans.

When I ask: what result did you produce with what you learned here, people can’t see any. Why? Because they probably didn’t DO anything with what they learned. Secondly because they can’t see what a result is, could be, would be.

Somehow you even think about that like the hungry chick in the nest: what extra worm will I get with doing nothing for it?

At most people call ‘feeling better’, or ‘not getting angry’ a result.

But that is not a result unless that ‘not getting angry’ allows you to get things done instead of sitting and stewing in your anger.

Most mornings I wake up hopeless. It is the nature of possibility to disappear while you sleep.

I take all that hopelessness, and get things done. As if I felt fantastic. Because it doesn’t matter how a producer feels: a producer gets things done.

My mind also screams: it would be so much better to be dead! And I thank it for sharing and I put my attention on getting things done.

‘I will get things done when I have the confidence! The skills! The motivation!‘ your mind screams at you. Result: you never get anything done, because you put the cart in front of the horses…

Confidence, skills, motivation come AFTER the doing… doing it enough.

One of my teachers, Sean D’Souza is well-known for his podcasts. He used to need a whole day or more to get a 20-minute podcast done. For years.

Through doing them he learned to do it better, faster, and now it takes an hour or two for the same result.

Do you think he felt good about himself, about podcasting, about life while he struggled? No siree… he didn’t.

He is a 28… he is a miserable sob… getting things done. I have never seen joy in his eyes… But he gets things done.

He teaches how he does things… Do people do things the way he teaches them to do? No. But they keep on following him and paying him. Just like my students do it with me.

I have a sunnier disposition than him, but my mind screams the same nonsense… The only think Sean and I share is that we don’t consider that voice the guidance.

There is a saying: aim for the stars. In the worst case you’ll get to the moon. Aim to the moon and you’ll end up with a handful of dirt.

This is actually true in my work too.

these are moon type aims.

No need for my work for these… or not much.

You probably can’t even think about a ‘stars’ type of aim… Not a having. Having a lot of money is just the tip of the iceberg of a result… If you want to have by getting… I also can’t help you, because my work, the work I teach wants you to be a producer… that leads to money, if that is what you want.

One of my students sent me an email of a ‘result’ she got from using what I taught.

She used to ask her brother to give her a ride. One day he said: you need to pay me $20 an hour from now on. She looked at her attitude and she saw that she acted entitled… but she wasn’t. No one is. She didn’t argue with her brother… she called for an Uber instead.

In her share, she saw not arguing as the result. But so what? Arguing is just arguing. But getting where you want to get to by doing what needs to be done is the result.

Obviously she is not up to even getting to the moon.

I feel defeated. And I probably am more defeated than how it feels.

Am I going to act on my feeling? No. Feelings, voices are noise. I am going to do what could produce results, and enjoy doing it.

You got stuck with the feelings and the voices.

Are you committed to remaining stuck?

I will rant about the bastardization of the English language in another post… for now, please consider that what you say commitment is… isn’t.

And because it is commitment that takes you over the obstacles, it is commitment that helps you to stick to your work when the voices and the feelings want you to quit, it would be really great if you were able to make a commitment… a real commitment, instead of what the current language suggests, a lame duty… like paying your bills.

I have a gift for you if you are interested… An interview of sorts with Dan Sullivan.

He teaches that everything you ever wanted needs to start with commitment… Commitment is like a sharp sword… it can cut through stone, steel… and of course your feelings, your voices, your resistance…

But it is also like a muscle… it can be grown to become that sharp sword.

At the present your commitment is probably that baby bird, a commitment to getting. Wanting. Getting something while giving nothing.

But eventually, through practice, you can become the Arnold Schwarzenegger of commitment. You’ll develop assiduity, and the ability to enjoy your work through assiduity.

But not without commitment.

If you want to see how life looks without commitment:

…look at your life, look at others’ life… that is how it looks. No constancy. Nothing you can be sure of. Like the weather… always changing.

Here is another gift:

An amazing meditation I did back in 2012… and it is worth doing it daily until you actually can commit to soul to do its work, so it can be happy.

If you have an unhappy soul, you have a wretched life… because soul is like a nagging baby: it won’t let you have a good life unless you take care of it.