I wrote this article eight years ago. It is good, but it still misses the mark. It misses the mark in seeing what is at the root level of humanity’s misery.

But that is not the root level issue.

The root level issue is that humanity stopped looking. Stopped seeing. Humanity replaced reality with words, with labels, with something that seems to behave like the scene on a stage… you can only re-arrange it… and there you are.

And inside that, the words the fundamental culprit that has derailed human evolution is the idea that things can be right and they can be wrong. And wrong is WRONG.

So now humans don’t see reality, they see everything on the level of the worm: right/wrong, good/bad, success/failure, rich/poor, beautiful/ugly.

And those words and humanity only seeing words got us stuck on the worm level of seeing… and this has completely arrested human evolution, set it on a sidetrack.

Some people, rare people escaped the ‘culture’ of right and wrong. The culture that civilization calls ‘morality’. I am one of them. By chance.

I see things largely (70%) the way they are without the labels. And therefore I can see what I don’t like is not part of the things. I know it is me who doesn’t like it, it belongs to me, not to the thing. And it talks about me, not the thing.

Why painful? Because you cannot fix what is not wrong. Because if you try, the fix will be worse on the long run than the original ‘wrong’.

OK, here is the original article. It is not untrue, but is not the whole truth.

I watched an episode of House last night. House is the TV show featuring a doctor, called Dr. House. The character’s vibration is 300… I am not talking about the actor, the character, his behavior, his view of life… One of the characters says to Dr. House: ‘But you are not curious!’ The bells went off in my head. That’s it! That moment suddenly made it clear to my why all my work has been ineffective with you, why you haven’t become an Expanding Human Being, in spite of your good intentions, in spite of all my articles, activators, courses…

You live in a world where you consider yourself a thing among other things. Where you and others have the characteristics of things: fixed, permanent, unchangeable and unchanged.

That is your worldview.

You may not see it that way, you may not consider yourself a thing, but your speaking, your attitude, and your actions gives you away.

Because it is not so, because it is so off base from how it is, your vibration is very low.

Your vibration is a composite picture of you, your behavior, your command in life.

Your actions are consistent with your view: you see yourself as a thing, you act one way. You consider yourself a ‘conversation’, a ‘narrative’ of a vibrational phenomenon: that is another thing.

You consider your future an unbroken continuation of your past… one thing. You consider every moment the beginning of the future… that is another thing.

You consider that what you know is true… that is one thing. You consider that knowledge is not a fixed thing, and the world is largely unknowable. That knowing anything renders you a thing… that is another thing.

Stupid gurus teach you that it is a belief system, but it isn’t

You try to change the belief you have about yourself, so you can change… that is so far from how it works, it is not even funny.

If you consider high vibration as the circle of what is true, what is so… everything you are being taught is miles from it.

Why? Why didn’t all the work, all that effort, all that money manage to change you?

Because you behave like a farmer who bought a pear tree because it was cheap, but who really wanted a cherry tree… so every spring he pins cherries up on his pear tree…

Your emotions, your actions, your beliefs are the pears. You want cherries? You need to graft cherry stock into your tree (if this is botanically stupid, forgive me). 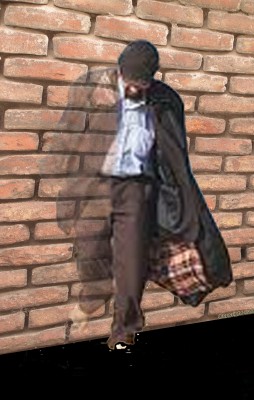 A tiny change in your basic worldview dramatically alters your mood, your emotions, your actions, your results, your beliefs, all the things you have been trying to change.

YOU make the change.

Some of my students manage to see that if they continue speaking the way they have been, their life, their actions will be the same.

But is the new speaking coming from a new world-view? No. It is now cherries pinned on pear tree… the tree doesn’t sustain cherries, it only sustains pears.

People who are incredibly successful, the billionaires, see the world differently from you

They consider every moment the first moment of a future that is DISCONTINUOUS, that is created then and there.

They consider other people waves, not solid, not fixed, not obstacles.

They had the exact same starting point as you. They just didn’t honor it as a thing… They didn’t spend their life wanting to be loved. They didn’t get pets so someone will at least consider them valuable.

They proved, with their actions, what they saw

Your action is always consistent with what you see. Always. 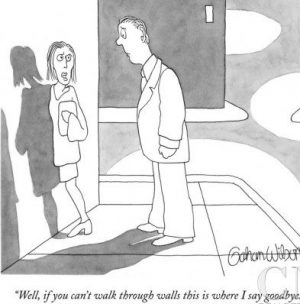 And rarely, some bold person runs through the wall proving that it’s not solid.

When you start questioning reality with your actions, your vibration starts to rise.

I know it’s not easy. But it’s the only way.

I have been thinking what course I could start now that we are ending the Prison Break.

If the ultimate linchpin for this non-evolution of humanity is the labeling, then maybe this is where we need to go. No labeling.

I have tried to ask people to look at incidents through the eyes of Martians… but it didn’t do the trick.

Maybe this time we should look at it through the question: What’s wrong with YOU?

Obviously, the answer is ‘not a thing’… But unless you learn to SEE it not just parroting the words, nothing will change.

If you have a suggestion what we should ‘try’ next, please write it in the comments section below. You can comment without putting in your name. Just write: anonymous… I’ll know who you are from your email address, but no one else. So you won’t have to look BAD… lol.

You see that this wrong, bad, is everywhere?

2 thoughts on “Your vibration and your worldview. What do you expect?”