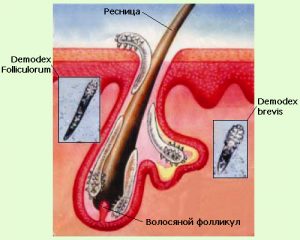 Rosacea is not an infectious disease, and there is no evidence that it can be spread by direct contact with the skin of an affected patient or through inhaling airborne bacteria. However, there has long been a theory that parasites within the sebaceous follicles of the face can stimulate inflammation.

One such organism is the Demodex folliculorum mite, which studies have shown to be more prevalent and active in rosacea patients than in control groups. The mite is 0.3-mm long and is a part of the normal flora of most adults, but becomes a pathogen after it multiplies and invades the dermis, creating an inflammatory response. Aside from rosacea, it has been implicated in folliculitis,[1]) dyschromias,[2] pityriasis folliculorum,[3] and inflammatory blepharitis[4].

Although there is not a standard rest or study for Demodex folliculorum or its smaller partner D. brevis,[5] a controlled study revealed 10% of all skin biopsies and 12% of all hair follicles contained Demodex mites. This study also suggested that the prevalence of both species increased with age, but D. brevis had a lower prevalence.