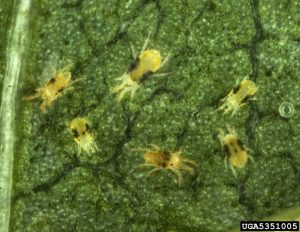 OK, here it is, the latest and greatest on fighting the spider mites.

The eight-legged female mites are yellow to dark green with two to four dark dorsal spots. At 1/60 of an inch, they are almost microscopic.

OK. New facts: this spider is able to reproduce outside of the body, if the family's survival depends on it. How do I know? I had not spider mites in the house, according to muscle test. No nymphs in me. Three eggs outside of me: in a pair of winter pants...

A day or so later I had three spider mites diligently laying eggs in my orifices. OK, lesson learned.

In the past two-three days I set out to catch them entering through the nose or the mouth... I caught them, late, through the nose, twice as they scratched my throat and I had to cough...

You know those experiences when you know that you swallowed a bug? Likelyhood is: you did swallow a bug. The irritation stays for a day or two in the throat.

I have also caught spider mites sneaking into my underwear, through the ointment, into my vagina, thrashing around, and coming out the same way, leaving their payload there to wreak havoc.

If you are starting to hate your life: I know what it feels like, I've been there for the past five months...

OK, after testing and testing and more testing, I have found that the only effective method to control the spider mites, and with diligence and consistency eliminate them is to use local poison 24/7.

By local I mean: on your whole nether region: in and around the anus and the vagina.

I will next experiment with using the poison in suppositories, but I haven't done that: it is a learning curve.

For now: I mix 5-10% in volume Benzyl Benzoate into my think unscented body lotion. It doesn't mix readily, so I will still have to find an emulsifier, so I still have to shake the bottle vigorously before I apply the stuff with my fingers: four fingers used as a spatula, slathering on, generously the stuff.

Benzyl Benzoate is available at Med Supply in South Florida, that is where I got mine. Or Matsa has been diluting a store bought preparation: that works too.

The reason you don't want the concentration to be higher, because this stuff can burn... as bad or worse as the itch: I have tried.

No Diatomaceous Earth: it has proven ineffective: the nymphs travel in an air bubble and don't touch anything in the poop, including the DE... so don't bother.

The nymphs as they spill out from the "hole" are hungry and very active: intense itching will alert you. This time, if you have the skill and the stomach, you can try to squash them: that is what I do: the toxin is very slow acting: it can take as long as an hour of them frolicking and wanting to get out of your pants, and if they do, the cycle isn't broken, and you'll continue to be the breeding ground for spider mites... I did that for weeks, until I started the Benzyl Benzoate regimen.

Wear panties that have tight elastics around the thighs and the waist. The bigger panties the better. I don't have those, but I work at home, alone, and can do a lot of things proper society ladies are not expected to do in public. lol... rofl... I think this is a very funny sentence.

The suppositories, which is the next step, would be in addition to this slathering... and will be made with the same BB (Benzyl benzoate) and something that melts only at body temperature. I think that it will work faster and better, but I don't have them yet. I have seen articles on the web on making suppositories, so if you want to experiment, please by all means do so...

http://www.medical-and-lab-supplies.com/catalogsearch/result/?q=benzyl+benzoate
How to make your own suppository... don't put the chemicals, etc. she does... just watch for the method... http://www.namas-natural-remedies-for-health.com/suppository.htmll
cocoa butter supplier: http://www.bulkapothecary.com/raw-ingredients/waxes-and-butters/wholesale-cocoa-butter-bulk/ As far as other uses, you may find it interesting that wholesale cocoa butter is used widely in Pharmaceuticals. Today many companies exploit cocoa butter's interesting physical properties. We all remember the M&M commercials talking about how they melt in your mouth, not in your hand. This is because bulk cocoa butter is solid at room temperature and melts at body temperature. Because of this unique melting point it is considered a perfect base for medicinal suppositories that need to be in solid form until inserted into the body. Probably not something you would like to associate with your favorite tasty treats but now you know.

and I just ordered this ice cube maker on amazon