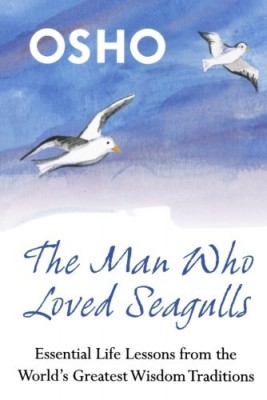 I think, that of all Osho’s talks that I know, this is the most significant, and the most helpful, if you EVER want to be able to return HOME, to the present moment, where you can be content, happy, and start living.

There was a man living by the seashore who loved seagulls. Every morning he went down to the sea to roam with the seagulls. More birds came to him than could be counted in hundreds.

His father said to him one day: I hear the seagulls all come roaming with you — bring me some to play with.

Next day, when he went to the sea, the seagulls danced above him and would not come down.

The greatest secret of life is — and remember it always — that life is a gift. You have not deserved it in the first place. It is not your right. It has been given to you, you have not earned it. Once you understand this, many things will become clear.

END_OF_DOCUMENT_TOKEN_TO_BE_REPLACED

ASCENDING TO THE HIGH SEAT, DOGEN ZENJI SAID: “ZEN MASTER HOGEN STUDIED WITH KEISHIN ZENJI.
ONCE KEISHIN ZENJI ASKED HIM, JOZA, WHERE DO YOU GO?’
HOGEN SAID. ‘I AM MAKING PILGRIMAGE AIMLESSLY.’
KEISHIN SAID, ‘WHAT IS THE MATTER OF YOUR PILGRIMAGE?’
HOGEN SAID, ‘I DON’T KNOW.’
KEISHIN SAID, ‘NOT KNOWING IS THE MOST INTIMATE.’
HOGEN SUDDENLY ATTAINED GREAT ENLIGHTENMENT.”

ZEN IS JUST ZEN. There is nothing comparable to it. It is unique — unique in the sense that it is the most ordinary and yet the most extraordinary phenomenon that has happened to human consciousness. It is the most ordinary because it does not believe in knowledge, it does not believe in mind. It is not a philosophy, not a religion either. It is the acceptance of the ordinary existence with a total heart, with one’s total being, not desiring some other world, supra-mundane, supra-mental.

END_OF_DOCUMENT_TOKEN_TO_BE_REPLACED

You are asleep. If you think you are awake: you won’t make any effort to wake up

One of the most important things to understand about man is that man is asleep. Even while he thinks he is awake, he is not. His wakefulness is very fragile; his wakefulness is so tiny it doesn’t matter at all. His wakefulness is only a beautiful name but utterly empty. You sleep in the night, you sleep in the day — from birth to death you go on changing your patterns of sleep, but you never really awaken. Just by opening the eyes don’t befool yourself that you are awake. Unless the inner eyes open — unless your inside becomes full of light, unless you can see yourself, who you are — don’t think that you are awake. That is the greatest illusion man lives in. And once you accept that you are already awake, then there is no question of making any effort to be awake.

The first thing to sink deep in your heart is that you are asleep, utterly asleep. You are dreaming, day in, day out.

You are not yet a reality.
END_OF_DOCUMENT_TOKEN_TO_BE_REPLACED

It is a very simple thing. People go on talking, ninety-nine percent, unnecessarily. One percent perhaps may be necessary but that can be written. Just keep a notebook with yourself and watch your mind for, why you want to say something? Is it necessary? Is it going to serve any purpose? Or it is just the fear of silence that makes you talk?

The fear of being alone that makes you talk? Because that is the only communication you feel with somebody. If two persons are sitting silently, they may be sitting very close but they are as far away as they can be.

In silence the distance is infinite, because there is no link that joins them. Even strangers cannot sit for a few minutes silently. Immediately they start asking about the other, where he is going, what is his name.

Now, it is none of their business. While I was traveling, it was everyday trouble, because I was always traveling in an air-conditioned coupe so only two persons were there, I and somebody else.
END_OF_DOCUMENT_TOKEN_TO_BE_REPLACED

JESUS SAID: A CITY BEING BUILT ON A HIGH MOUNTAIN AND FORTIFIED, CANNOT FALL NOR CAN IT EVER BE HIDDEN.

JESUS SAID: WHAT THOU SHALT HEAR IN THINE EAR AND IN THE OTHER EAR, THAT PREACH FROM YOUR HOUSETOPS; FOR NO ONE LIGHTS A LAMP AND PUTS IT UNDER A BUSHEL, NOR DOES HE PUT IT IN A HIDDEN PLACE, BUT HE SETS IT ON THE LAMPSTAND SO THAT ALL WHO COME IN AND GO OUT MAY SEE ITS LIGHT.

JESUS SAID: IF A BLIND MAN LEADS A BLIND MAN, BOTH OF THEM FALL INTO A PIT.))

And nothing less can satisfy you, only the eternal can satisfy you. The momentary cannot satisfy you; rather, on the contrary, it will make you more hungry and more thirsty. It is like someone throwing butter in the fire to put it out – it will become food for the fire and the fire will increase. The momentary is just like butter in the fire of your mind’s desire; it helps it, it is a food. Only the eternal can quench the thirst, there is no other way.
END_OF_DOCUMENT_TOKEN_TO_BE_REPLACED

I haven’t had many people say that I confuse them, ((by the way, confusion is a much higher state of consciousness than where you normally are: I know, I don’t know… the seeming clarity shows that you are not looking, you are parroting something that doesn’t belong to you.)) probably because to say that is confrontational, and only about 4% of you is confrontational. Not that you don’t think that, but it takes courage and individuality to utter those words, and you don’t have it in you.

What would it take to say those words, without animosity, without anger, without pointing fingers? If you could solve that conundrum for yourself, life would be a lot better, wouldn’t it?

Until the age of about 40, my biggest issue was what to do with my anger. I made up a story, based on accidental coincidences, that my anger kills… and that I am a murderer. Obviously, with that cornerstone of a belief, it was impossible for me to express my anger in a socially acceptable way, so I suppressed, and then I exploded, and I repeated that pattern for 40 years, to my detriment.

I had ulcers, nervous breakdowns, depression, insomnia… not pleasant.

Anyway, here is a talk transcribed from Osho, that I think you’ll enjoy. ((Here is the video of the same

Baby, my whole work is to confuse you!

END_OF_DOCUMENT_TOKEN_TO_BE_REPLACED

Question – Yesterday I heard that my friend had died. Yet as I wept, I found myself giving thanks for the sweetness of life. Is there a place for mourning?

Then one day suddenly death comes, and it is always sudden. It gives no hint that it is coming. The foot sounds are never heard, the footsteps can never he guessed. It always comes suddenly, catches you unawares, and the friend is gone, the lover is gone, the beloved is gone; the mother, the father, the brother is gone. Then there is mourning because death destroys tomorrow, and you were depending on tomorrow. Now there will be no tomorrow. Now you cannot postpone, and the person is gone. Now you feel a deep repentance; out of that repentance mourning arises. You are not weeping for the friend who is gone, you are weeping for yourself, for the wasted opportunity.
END_OF_DOCUMENT_TOKEN_TO_BE_REPLACED

Question – Is Psychic Exploitation possible in the name of Shaktipat? How is it possible And how is the Meditator to guard against it?

And he who claims to give is bound to take more in return, or else there was no need for him to shout in the marketplace.
END_OF_DOCUMENT_TOKEN_TO_BE_REPLACED

Question: Beloved Osho, There is a statement by J. Krishnamurti that “the Observer is the Observed.” will you please kindly elaborate and explain what it means?

Osho: The statement that “the observer is the observed” is one of the most significant things ever said by any man on the earth. The statement is as extraordinary as J. Krishnamurti was. It is difficult to understand it only intellectually, because the way of the intellect is dialectical, dualistic. On the path of intellect the subject can never be the object, the seer can never be the seen. The observer cannot be the observed. As far as intellect is concerned, it is an absurd statement, meaningless — not only meaningless, but insane.

The intellectual approach towards reality is that of division: the knower and the known have to be separate. Only then is there a possibility of knowledge between the two. The scientist cannot become science, the scientist has to remain separate from what he is doing. The experimenter is not allowed to become the experiment itself. As far as intellect is concerned, logic is concerned, it looks absolutely valid. But there is a knowledge that’s past understanding, there is a knowing that goes beyond science.
END_OF_DOCUMENT_TOKEN_TO_BE_REPLACED