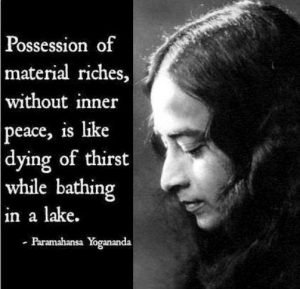 Yogananda… I have measured his vibration at different times, in different contexts, always having a different number come up. So today I spent some time in his space… to see what’s up.

Paramahansa Yogananda was a sad person. For two reasons, the two sides of the same coin: he had something that he wanted to share, and it wasn’t shareable.

His words are simply his idea what made him the way he was, and the words did not communicate. Did not do for others what they, he thought, did for him.

So, slowly but surely, his words became a lie. Now, he himself wasn’t the way he said people should be: he had sadness, grieving, devastation move into his heart.

And greed… wanting. Wanting it to be different. Wanting that burning go away from his throat and his upper chest.

And then it all fell apart… and what remained is pretense.

You don’t know who you are. You lie about it, you make up s-h-i-t, but there is not a you that you consistently are.

Landmark Education (and I think other coaches and companies as well) decided that who you are needs to be invented.

But all this invention, all this creation is on the top of an undifferentiated mess of stuff you don’t want to look at. So, whatever people in Landmark invent as themselves doesn’t last long, and has to be repeated, ad nauseum. People need to remind themselves… but that is obvious:

If you know who you are, you don’t need to be reminded of it.

END_OF_DOCUMENT_TOKEN_TO_BE_REPLACED

Sometimes I sit on a topic for days before I have the courage to write an article about it.

Why do I need courage, you ask? Because some topics go so much against the current power structure, that you can get ostracized, killed, deported… and only when one is clear and willing to take on those punishments, that one will be willing to open their mouths.

I watched a Netflix movie yesterday, Hannah Arendt, a German-American political theorist and thinker. Her claim to fame or infamy was her book or report on the Jerusalem trial of Adolph Eichmann in the 1960’s.
END_OF_DOCUMENT_TOKEN_TO_BE_REPLACED

None of us is an island, and in our quest to carve out a meaningful life, we encounter resistance. Often a lot, even more often, from people who “should” be on our side. Sometimes that person disagreeing with you is is me… if you are one of my students.

I had an experience of discord this morning, an argument 1.
END_OF_DOCUMENT_TOKEN_TO_BE_REPLACED

This is an article partially rewritten by me. It is from Rob Brezsny from his book, Pronoia… with my notes, annotations…

He describes, through the “apocalypse” the relationship between the pedestrian (driftwood) way of living and the living on the higher floors… pretty much what I teach… Although his language is a lot more lofty, a lot more “spiritual,” but he expresses what I am trying to say, maybe better than I do.

Some “visionaries” and “prophets” expect a huge and sudden shift in the world’s story sometime in the coming years. Most predict that it will be a sudden cascade of events that completely changes everything everywhere.
END_OF_DOCUMENT_TOKEN_TO_BE_REPLACED