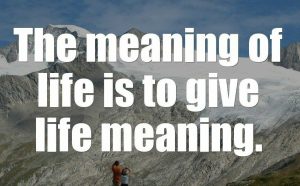 According to some statistics, 30% of humanity lack meaning in their lives.

I think that this statistics is off by a lot.