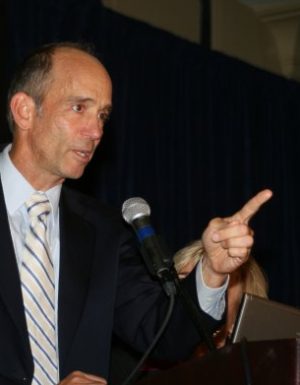 The most important thing you want to get from these numbers: he does not have the capacity and the humility to tell truth from falsehood. He is not connected to the Source of higher truth, because of his arrogance, so what you get is his personal opinion… or worse: his “considered” opinion…

Truth value of his judgments and interpretations: 7%

His website’s truth value: 4%. Very very low… What does it mean? it means that 96% of what the site says is not true.


Why is the website’s truth value lower than his own judgment? Because it is a commercial website. When you buy something he gets paid. Which suggests that his integrity, 2 on a scale of one to 100… very low.

Scientists’ integrity, on average, is 8%… they don’t get paid for the truth either.
But even if they did… the average truth value of what they publish is 2%

Why is it so low?

When you look at anything in life, it has no meaning. Any interpretation of any phenomena comes from the observer who gives meaning, interprets what he sees.

Labels stuff, makes up stuff, and skews stuff according to the meaning they gave.

And even though what they see is true… obviously, their interpretation is way off… mostly coming from a self-serving point of view of the genes.

Example: The EZ water, the fourth stage of water to which Dr. Mercola has given a lot of attention.

The phenomena they observed was happening, but the interpretation of the phenomena, the “what is happening and why?”, in the case of “EZ water” is 7% close to the truth… i.e. it is very far.

Dr. Mercola‘s own numbers, the 7% cell vibration should clue you in: the water he so loves (structured water) is not helping his cells at all.

In addition to that, I think, he drinks teas and other stuff mixed in water… and only clean, pure, fully coherent energized water has high enough coherence for the cells to let the water inside.

I have met the guy a number of years ago at a conference. I had one very unpleasant interaction with him where he snubbed me… brushed me off.

I wonder if I do that… yeeks.

What do you want to take away from this article? That Dr. Mercola is bad? I think I am saying things that are more worthy of your takeaway:

1. observing the truth is one thing. Interpreting it correctly is another.

One can interpret reality falsely because

a. They have no access to the truth, because of lack of knowledge, lack of humility, or lack of spiritual/intangible capacities and skills (the vibration number, the overall intelligence, and the number of capacities clue you in to this)
b. They have an agenda that makes them not see the truth or willfully obfuscate the truth.

Why this is valuable to you?

Because very likely you cannot make a good value judgment based on YOUR vibration level, your number of spiritual capacity, and your lack of knowledge.

This is why I publish these reviews.

I have no monetary interest, and I base my “judgment”, the numbers, on muscle testing while I am connected to Source.

So it is NOT my knowledge level, not my intelligence that guides the numbers, it Source’s… Source that is supposedly knows everything without taking sides. Source = All Knowledge = Zero Point Field.

I noticed yesterday that I am now able to read a book that talks about god… As long as god is replaceable or interchangeable with the Zero Point Field, I experience no tension…

In contrast, when “god” is imbued with human characteristics, I have a hard time reading it.

The book I finished yesterday requires another reading, even though its truth value is only 10%. But it says things that are true that I had never considered before. 1

1 thought on “Dr. Mercola and his site… a vibrational review”