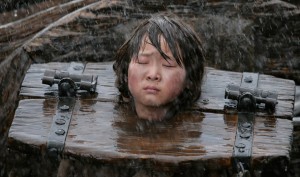 I consider a book or a movie really good, if it gives me pause.

What I really mean: it gives me a question that I can ponder, maybe even decades. Or until the insight comes.

Obviously, if you have been reading my stuff long enough, you know that I believe that to find the path, you need to evaluate and analyze the mis-steps, the mistakes. To know good, you need to know evil.

One of this puzzle pieces fell into place today.

The movie is about Genghis Khan, the starting point of the the 300 year old invasion, plundering, and decimating of Russia, China, and Europe.

Now, what is puzzling about that? It’s wrong, right? After all killing is bad… waaah,waaah,waaah. All life is sacred… waaah, waaah, waaah. 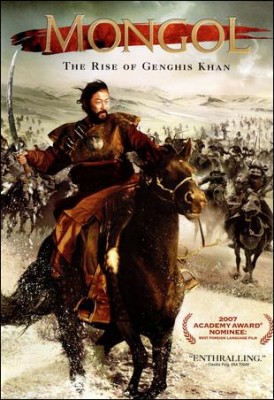 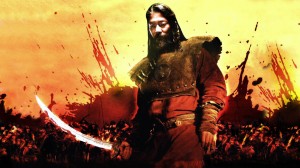 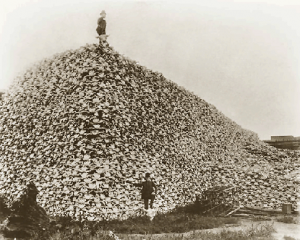 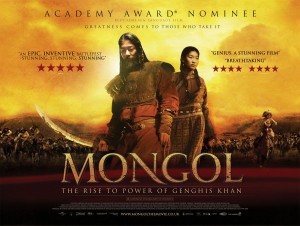 I am not going to look at that in this article, the right and the wrong and the bad and the sacred… I am going to look at something else, maybe more important to look at than this self-righteous crying… Every country, every nation, of every color and belief has suffered losses, decimation, occupation and oppression by another… at one time or another in history.

What I am most interested is this: Genghis Khan was, at least according to a movie I saw, an amazing person with deep love, loyalty, drive, and compassion.

The movie is called “Mongol.”

In that movie we find our Temujin, a little boy, shy, son of the khan (leader) of a smaller tribe. He acts with his heart, chooses a future bride, not out of political consideration, but from his like, and his family gets punished. He suffers imprisonment, torture, hardship, for decades before he becomes the leader, and unites the small tribes into a unified nation under his leadership.

Sounds really good, unless you are NOT a tartar, not a mongol, not with him. Then it sounds really ominous. His hordes killed so many people, that entire regions became primaeval forests again.

Today, one out of two hundred MEN on Earth are in blood relation with Genghis Khan, or so an article claims… wow. 2

So, what did he do, that united those tribes that caused killing of millions?

He saw, that loyalty was expected of tribesmen, but rewarded very meagerly. It was always the khan who took most of the spoil, the best land, the best looking girls…

When Genghis Khan, then still Temujin saw that, he offered most of the spoils of a fight to his fighters, and took to himself barely more than each one of them.

Which means, what made him win over competing khans is his appeal to greed, and to greed’s connection to killing.

I see the same dynamic in maffias: the whole energy comes from greed, leading to killing.

And once greed the driver of actions is established, all seeming generosity, all seeming compassion, all seeming caring, is just window-dressing, just applique… on the drab, toxic foundation.

It’s why you are not taking to the basic moves of raising your vibration: you insist on your “evil”, “greedy” ways… and, although the saying says “the road to hell”, it fails to mention that the road is hell.

Just watch your emotional state… and your vibration.