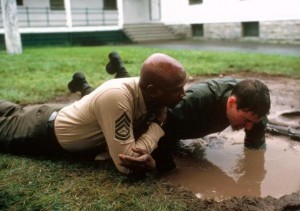 Movie Guidance from the Soul: An Officer and a Gentleman (1982)

I saw that movie not quite a year ago… and it’s 30 years old? Of course, Soul was forcing me to watch it. Not my kind of movie, though it was a good movie.

I just got today why I needed to watch it.

The movie is about this kid who had a dream of becoming a fighter pilot. He had nothing going for him, he was spoiled, weak, and street smart.


The sergeant, a yelling cruel bastard, gave him hell. Our boy never gave up, never gave in, because… we’ll see what he had later.

Let me skip the middle, the whole story, and let me jump to the end.

After most of his fellow recruits fell by the wayside, he comes out on the top, with honors and with honor. A Human Being.

Here is the million dollar question: was it because he was such a great guy?

If you answered yes, you just lost your million bucks.

No. There were two components: the guy had a dream, plus the cruelty and harshness of the sergeant.

Commandos volunteer, they are not enrolled.

Steel is forged being burned and beaten to pulp.

90% of that victory was due to the sergeant. To his unrelenting, unforgiving, never letting up torture, pressure, fire.

Lesser beings fell out of the game. That was the purpose. You don’t put a quitter, a sissy, a needy child on a fighter plane: the whole mission and 5-7 people’s life depends on your behavior when the going gets tough.

I have the style of that sergeant. Naturally…

I am more committed to all of you than any one of you.

You can always run crying to mommy, or any of those “gurus” with the vibrational frequency of 200 or so… they will be happy to take your money and tell you that you are OK.

Don’t be ashamed, you are part of the majority, you won’t die alone. I’ll weep for you. You’ve been a jolly good chap (or gal?) and we’ll miss you.