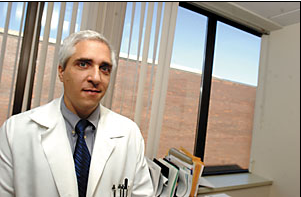 Neurologist Steven Novella treats patients with  neuromuscular conditions where the brain fails to communicate with the rest of the body.

And as a hobby, he is a myth-buster in hot pursuit of the too good, too strange to be true — systematically proving that there is rarely anything new under the sun.

He says there is not a world of difference between his two lives. “What I’m doing in my day-job is more profound, but the underlying principles are similar,” says Novella. He is an assistant professor in the School of Medicine’s Department of Neurology. “Crop circles or neuromuscular conditions, we find similar logical fallacies, a susceptibility to delusion.”

He is president and co-founder of the New England Skeptical Society. He pursues with vigor unusual and  fraudulent health claims. But he also tackles subjects that are outside of his medical training — one example is, Ouija boards.

“We had a married couple that claimed they got useful information through a Ouija board,” he says. “They were blindfolding themselves with a handkerchief. But, you can still see the board  through a handkerchief, so we used real blindfold on them. Their powers disappeared.”

A magician, James Randi and his foundation offered a 1 million dollar prize to anyone who could show, under observation, that they had paranormal or occult power. The New England Skeptical Society and Novella assisted in properly screening entries for the prize offered by Randi, a veteran magician.

“Magicians are skeptics because magicians are experts at deception. They see how people are fallible to optical illusions, misdirection, false perception,” Novella says.

To this day no the prize hasn’t been awarded, though lots of people have tried to win it. One contestant, for example, claimed he could control the flipping of a coin with his mind.  “We found he was making logical errors in his thinking,” Novella says. “He said he needed an ‘undefined’ period to warm up, then the ‘power’ would kick in, and after another undefined period, the power would disappear. He could pick a time  out of the middle, that fit his claim. That’s basically cheating.”

Whether the person claiming to have supernatural powers is a con artist or a true believer is not easy to tell… It would take being able to read the contestant’s mind, and, Novella says jokingly, he is not a mind reader. “When you catch someone cheating you guess they lean towards con artist but often you have no clue,” he says. “The coin flipper, struck me as sincere but naïve. The tests are  well designed for cheating, we see more true believers.”

The tests are videotaped. The person tested must agree to the test before it is run to curtail any claims that it was not fair. One ‘mind reader’ tested agreed that in case he guesses correctly 1% or 2% then they would have a more conclusive follow-up test. He got zero out of 20 correctly, but still complained.

There are people who say they can guess the gender of a fetus by looking the shape of a mother’s abdomen (I am one of them). Others obsess about crop circles and or rave about conspiracy theories.  Half of all claimants are dowsers claiming that they can find water or minerals, on site or even on a map.

They also examine phenomena such as stories of haunted houses or communicating with the dead. They recently concluded an investigation of two women claiming they could record the voices of ghosts. this is called EVP.

“They ‘hear’ the ghosts talk by amplifying the background noise.”

During a field trip to investigate the claim, he says, he realized how much background noise there is in a quiet room and how much that sound carries. The problem with EVP, he adds, is the listener has no idea about the source of the sound and there is no way to verify that the source a ghost.

Skepticism is a useful vehicle for teaching logic and science. But, surprisingly, people maintain their belief despite evidence to the contrary. This leads to another fascinating subject: the psychology of belief.

“Dowsers are an excellent illustration of self-deception,” he says. “You know what the outcome you are going for, it’s not open ended, and you can subconsciously create the effect you need: the rods cross or turn downwards. This is known as the ‘ideomotor effect,’ in which you make a small subconscious movement to match your expectation. You will always have water if you dig deep enough. It’s also known as ‘confirmation bias.’ Then you remember your hits and you forget your misses.”

“The need to believe is huge,” he continues. “It’s part of the human condition. Money is one motivator, but there is also a love of the fantastical, the special, the out of the ordinary. You want to be distracted from your ordinary life for a period of time. And people are uncomfortable with not knowing things.

The discipline of science is that we have to be comfortable with what we don’t know.”

Another sensitive subject is the furor over if vaccination causes autism, whether mercury-based vaccine is cause for the rising incidence of autism. Novella sees it as a scientific issue to be resolved with evidence and logic. After 70 to 80 hours of reviewing all of the current research, Novella claims he found no connection between the vaccine and autism.

“There is no evidence of an epidemic of autism,” he says. “Any increase in surveillance will increase the number of patients who are diagnosed. The number still hovers around 60 per 10,000.”

The parents desperate for a ‘cure’ resort to chelation to rid the body of mercury. Some try exorcism. “Considering other causes gives you something simple and straightforward to fix,” he says. “There is a strong human desire to oversimplify things, to make them manageable and controllable and to fix them.”

Novella loves science and sees himself a teacher and educator in addition to being a doctor. He wasn’t always a skeptic, he says. “I believed a lot of wacky stuff when I was a kid; I had curiosity, but I had no discipline. As I studied science I began to learn how to separate truth from fantasies and fiction.  I still like science fiction movies, I also know to separate entertainment from science.”

The New England Skeptical Society is small, 200 members. They want people to question and think more deeply about scientific questions. One issue that comes up often is faith.

“Our position on faith is that it’s a personal choice. We believe in freedom of religion. The issue we deal with is people crosings the line and trying to apply faith to science, like creationism. Intelligent design is very clever wording, and deceptive, but it’s creationism, not science. They are talking about God, they’re just  coy about it.”

At home with his two children Novella allows them Santa Claus, the Tooth Fairy, the Easter Bunny and whatever else they might absorb from the culture.

“They’ll figure out that these things are not real,” he says. “It will be a good experience for them.”