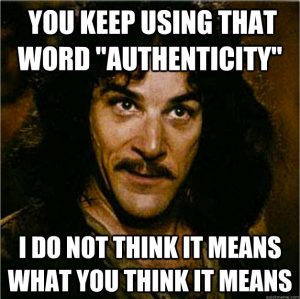 I am a foreigner. I learned the English words, one by one. Since the age of 10… English was my third language.

I only started to learn the beingness associated with, the beingness indicated by some big words when I came to the United States at age 38 and started the work of transformation.

The first beingness word I looked into was generosity. I was still a beginner at distinguishing.

Distinguishing is the art of precision, astuteness, of what something is and what that something isn’t. What it isn’t will distinguish that thing a lot better, a lot clearer than trying to explain what it is. Interesting, isn’t it? Michelangelo and his David… Removing, in language, the parts of the stone that aren’t David.

I had to learn the hard way what generosity isn’t, how “generosity” can and does make enemies of friends, destroys you in the process, while it builds your ego sky high.

The second beingness word was authenticity.

Not much can be found anywhere about that beingness, because it is near extinct, because authenticity flies in the face of what society wants of you: society wants you to suppress who you really are, and pretend to be part of the group… to be respectable, to be ‘not you’, to want what ‘they’ want, not what you want.

Pretending to be authentic is, of course, rampant.

My teacher, Werner Erhard says: the only authenticity that is available to humans is to be authentic about our inauthenticity… I won’t even try to explain that to you… lol.

So, what is authenticity? I have found in my four year long investigation and learning, that authenticity is a kind of transparency. A kind of seamlessness, being the same through and through. A way of living where there is nothing is hidden in the unsaid. Where you have no agenda that is not in the open (because occasionally we all have an agenda, don’t we? Even if we call it a purpose… lol. Or a goal. Or an aim… it is still an agenda. Now, there is nothing inherently wrong with agenda, but it is inauthentic to pretend that you don’t have one.)

One big and fundamental agenda we’ll always have: looking good and making it.

Of course, looking good and making it means different things for different people. For some it means having to be liked, accepted, well thought of, agreed with, etc.

You want to be liked… but you hide it. You go along to get along. You agree so that you are accepted. You say “intelligent things” to be well thought of. You smile. You laugh. You joke. You accept invitations, or you invite people. You make money to fit in. You do what others do to fit in. You post haughty stuff on facebook… to not be left behind.

You are through and through inauthentic.

Even your feelings are inauthentic. You even lie to yourself.

And, of course, there are degrees… like with all beingness.

In the following article from a yoga site from New Zealand, we have some beginner level advice on how to be authentic:

If you can’t publicly own it, don’t do it (easy to say right?)

Forget the Ten Commandments. Forget even the Five Yamas or Niyamas. Here instead is the Golden Litmus Test. Apply it to all your behavior.

At least, not without further inquiry into the action, word or thought. Perhaps, with further inquiry, you will be able to publicly own it. Until then, park it.

There’s just no way I can wiggle out of anything, if I ask myself that question – can I publicly own this action, word or thought?

Because to do so is to own the action, word or thought as part of who I am.

It’s to be authentic. Not perfect, but authentic.

In the past, I’ve owned my drug-taking. My partying. My mental health issues. I’m looking at owning my sexual history.

Owning the past has been a path to empowerment for me, because it’s meant I’ve fully accepted me for Me, in all my inglorious glory.

And applying this Golden Litmus Test now means that I take time to truly be present with whatever action, word or thought I’m considering…. so I do, say and think less that will need to be “owned” in the future.

Taking time to be present now means I can’t bullshit myself.

Because I know, just as you know, when I’m doing things that will hurt myself and others.

Of course, our wily minds get in on the act and present all kinds of reasons why we should just go ahead and have that extra piece of chocolate cake, lie on our tax return or sleep with those married people.

Anything is justifiable, in the mind, by the mind, for the mind.

Except that one question: Can I publicly own this extra piece of chocolate cake, lying on my tax return, sleeping with married people?

And maybe you can. Maybe it’s OK for you to eat cake, dodge tax or have sex with married people. Because of the circumstances, situations, reasons or the path you’re on…

You know if you can publicly own this action, this word, this thought… And if not, why are you doing it? Saying it? Thinking it?

What would happen if there was total transparency?

Laying down the facts of the matter with no attempt to control the receiving of that information?

i.e. What would happen to you if just told us what happened?

Is this possible? Is this helpful?

What does it take to expose ourselves, as we are, in the choices we make and the things we do, with nothing to hide behind? No excuses, no deflections, no flowery new-age language or hazy spiritual platitudes?

Courage, undoubtedly. Trust, for sure. And surrender to what might happen as a result.

What might we gain, if we were to have the courage, trust and surrender required to expose ourselves as we truly are, inside and out, private and public, to all who would ask?

Does any of us have what it takes to live like that?

Great article, isn’t it? You see that being authentic is arguably the highest level anyone can aspire for. 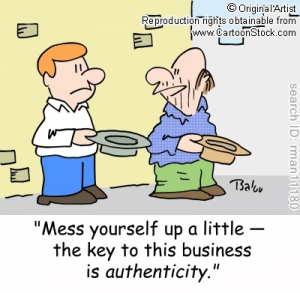 The saying goes: the rich man cannot get through the eye of the needle… If you ever wondered why, it is not because his money… but because of his inauthenticity. There is too much hidden in the unsaid…

Find out the truth about yourself… it is more than you actually know. It is incredibly freeing… if I may say so myself.