Did you know that every revolution has been, historically, just a re-shuffling of who is going to have power over who?

When I first read Osho’s book, Rebellion, Revolution and Religiousness, I actively worked on understanding.

In Hungary we learned a lot more history than American students, and I personally have seen revolution, and reform and all that never changed anything on the long run.

A lot of people repeat Osho’s words: he is very easy to repeat without understanding, without making the words yours. But I don’t believe any of those people really get what he was saying.

I am not sure he understood himself, after all 90% of what he said came from the Tree of Knowledge. 1

But his statements that neither revolution nor reform make any difference, are as good as gold.

This was driven up by a movie preview I saw about a rebellion, something like Jones State, that will come out in the summer of 2016. 2

The movie is called Free State of Jones.

I could feel the excitement it will bring to every person that is against the current system, the survivalists, and such… Excitement, enthusiasm, and no understanding.

As long as the average number of spiritual capacities is around seven, generosity, tolerance, non-competition, peaceful coexistence, individualism, are impossible. 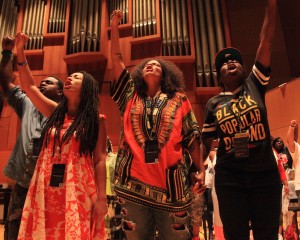 As long as people see themselves as oppressed by some oppressor, there is a need for oppressors… otherwise what will happen with the poor oppressed? They will actually have to take care of themselves?

Peace activists are against war. But they are not for peace… if peace broke out, they would not know what to do with themselves.

Those that fight abuse, disease, poverty are on the same vibration as what they are fighting. Full of hate, full of animosity, pointing fingers.

And that is the uncomfortable, and inconvenient truth.

It includes all and excludes no one.

My work is to bring in divine intervention.

Humanity had hundreds of thousands of years to straighten itself out, to evolve to the next level of human: human being.

Instead of evolution, we have seen devolution.

The work I do, the work of divine intervention, is to reverse this process, and work out a method with which individuals can choose to evolve. Eventually, if I live that long, I may start working on families, groups, communities… although I am getting closer to my own exit time.

I am not worried if anyone will continue my work. I am here to do my work now and not worry about anything else.

When I contemplate leaving my body, I only look at the sky and the trees and the birds with some sadness… and with gladness at the same time: they will remain, and life will continue on.

I have noticed that when I am concerned with people taking my work with respect, when I am concerned whether people do what they promised to do, whether a new spiritual capacity stays open or not… I am like an activist… I am frustrated, I am angry, I am in a hurry, I am forcing, I am low vibration.

And so are you, whenever you are concerned. About anything.

We all want to live in the zone, where the world disappear, and only what we are doing is there… even we disappear.

You are in heaven. No, you are heaven.

But how does an ordinary person get into that state?

I call that “putting all power in all action”. It is a capacity. A spiritual capacity. High vibration capacity.

Probably not readily available right out of the gate…

One tool that can help, even though it doesn’t activate the spiritual capacity, but yet it touches you, because it shows you separate from the concerns of the horizontal world, the horizontal dimension, is the avatar state audio: All power in all actions.

When you look at the different avatar state audios, you’ll see a strong correlation between spiritual capacities and those audios.

Why is that? How does it work?

Turning on the capacity, it seems cannot be done through an audio. It has to be done, by me, personally. I wish it weren’t this way. But it is. 🙁