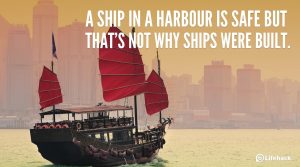 The most important difference, from your point of view is this:

When you plan for survival, every setback threatens you with death, or poverty, or lack, or illness.

When you plan for growth, every setback is a new opportunity to use your skills to now grow from this new level.

The natural tendency is to want to shrink when you feel threatened. To withdraw, to cut your losses, to run. every fiber of your being wants to run, or return to the fetal position.

Like in many things, the natural tendency is not what works.

If the natural tendency has always won, there would be no intelligent life on the planet… only maybe bacteria.

All growth, all evolution, all advancement is the result of overcoming the natural tendency.

Shrink until it is comfortable again.

Comfortable. The opposite of growth. The first step of living life for survival.

It feels so natural, you don’t even notice until you almost hit bottom.

I am actually speaking from personal experience… I am discovering that business-wise I have been in survival/shrinking mode for quite a while. And now I am going to spend some time to map out all the symptoms, triggers, so I can share it with you.

And while I am doing the sober “coming to terms with” what I have been doing, slowly but surely life-force is recovering from under the mountain of good reasons why it was a good idea to shrink.

One of the secrets of turning life around is embedded in these words “coming to terms”.

Coming to terms with requires a little distance from that mountain. Emotional distance. Intellectual distance. A detached stance… or you get involved and nothing will get done.

In the physical world, this phenomenon is like the stuff that is suffocating you. Unhandled stuff you store, because you haven’t come to terms with it.

In the physical world, smart people create that distance, that detachment so necessary for throwing off old, un-needed stuff, by hiring an organizer.

In the physical world, starting from nothing is as useful as in the emotional-spiritual world, and looks just as painful. Looks like small death. Scary like the monsters under the child’s bed.

I didn’t know I was afraid of that small death until I just wrote about it now.

I use writing to come to terms with stuff… but the topic never came up.

The best way to come to terms with anything is to be forced to do it.

Moving is a great opportunity to come to terms with the avalanche of stuff you’ve been carrying… physical stuff.

Emotional stuff: coaching seems to be the most effective way to be forced to look at stuff you don’t want to look at.

In that process, if done well, you’ll find who you are, really, and come to terms with that too.

There is nothing more liberating than starting from nothing, both on the physical and emotional level.

I am only imagining: I have never had that happen to me. I have started from nothing physically, several times, but emotionally I haven’t.

Being busy, working, is a great excuse, but no excuse will give you the results you want, and it won’t give me the result I want either.

I am almost done emotionally… it seems that I have arrived to the last mound of stuff I have not come to terms with. Physically… I haven’t even started.

Everything feels like “I might need it” even though the stuff has been gathering dust for years, some even decades.

But, it seems to me, I need to get back to the bare minimum, to be able to start from nothing, and start growing, in the physical world as well.

The goal is to get back to nothing. Nothing carried that is not vitally necessary.

The capacities needed to get this work done are

No one with enough Life-Force will resign themselves to a life of survival. Life force is like the bird’s desire to fly, it is like the baby’s desire to coo… the more you have the more life you can carve out for yourself, and the more energy you’ll have to put in your business, work, marriage, hobby, life.

Warning: A new capacity is like a seedling. When you keep it alive for three days: it is like you watered it, or more often put it in a vase. When you stop watering it: it dies. This is the secret… So don’t do it. Commit to nurturing your capacities… So you can grow.

Can you go without adding new capacities? Muscle test says: not likely. So there you have it.

Will new capacities automatically make you grow? No. You have to put yourself into a situation where you have to grow… or else… A self-invented do or die.

How will I do it? I haven’t invented a do or die situation for myself… Canceling my lease would be one option. Deciding to move to another country would be another. Hiring a person to come and do it, rain or shine… and having to pay them… close, but no cigar…