If you have been dreaming of changing, but no matter what you do, you haven’t changed, you may want to use my Dyslexia strategy and become someone who can change. 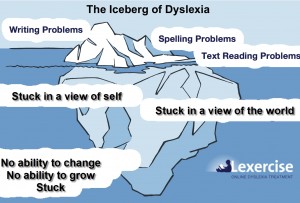 I had an insight this morning. This article may be the most important article I have ever written. And 99.99% % of you will ignore it… even if you read it three times. And I bet, you won’t even bother to read the footnotes… Must be not important you say, and you are right… about everything.

The world belongs to the changeable. The flexible. The one that can adjust, and go with the punches. This is what’s been missing… or at the minimum, without this you can’t change.

You know, if you know me that I have been harping on the color exercise. Simple exercise, everyone gets it right in minutes… except.

What people are not getting is this: It is training. Like wax on wax of in Karate kid. Doesn’t have anything to do with colors.

You know by now that I am dyslexic… very dyslexic.

Dyslexia simply means that you see something similar to what’s there, but not what’s there… different letter, different word, different color, empty when there is something there, and something when nothing is there… Maddening. 1

Playing cards is like playing chess for a blind man: you have to summon something to be able to play it as well as a seeing person.

I always suspected that there is a higher purpose in playing for me, that my dyslexia is a tool most people don’t have. That it is a tool that takes me to live on the edge, seeing stuff most people will never see, maybe even won’t see when I tell them about it.

This may be the case now. I saw something that you have never seen.

Unless you learn the habit of looking twice, looking in an orderly way, unless you have the mindset that what you see is not what is there, you’ll always make your life from what you see… not what’s there.

Human’s haven’t evolved ever since they discovered language.

Language and mind have displaced reality.

In one of Tai Lopez‘s segments he calls this “the 500 year old mind.” When what you see is what you have always seen… because the mind screens out, filters out everything else.

Unless you train yourself to force the mind the retreat and allow you to see what’s there, you’ll continue living the same life, the same way, because what you see is the Matrix world, not reality.

What is there is filtered out, covered with a screen that shows what you have always seen.

From time to time the veil lifts for a second, but most of the time you are too drunk with yourself to take notice.

Then quickly you repair the veil. Back to business as usual. Unconsciously, continue living in the matrix.

There is nothing wrong with it. Except…

If you are up to more, feeling more, being more, doing more, loving more, enjoying more… as you claim

If you are up to more, feeling more, being more, doing more, loving more, enjoying more… as you claim, then there is a mismatch between you living in the matrix and what you want.

But… you can’t get out of the matrix if you continue seeing what you have been seeing.

You’ll be probably accurate where my dyslexia makes me err, but that is not where you need the mastery most.

You need the mastery everywhere else. Where your opinion, your concept, your interpretation, your story covers up what’s there.

Unless you stay frozen into one particular vantage point, unless you keep insisting that your delusion is reality, you’ll start to get pop-pop-pop glimpses of what is covered up.

Ultimately, if you went all the way, you would see that nothing has meaning inherently.

Things, actions, life is empty and meaningless… unless you give them meaning.

That is the enemy the color exercise is designed to counter, mitigate, and have war with.

The world is run by evil people. And who is allowing it is you. Because it doesn’t fit with your matrix to see evil, and to become someone who sees.

The reason six million Jews could be exterminated during the Holocaust, because their Matrix did not have any inkling that people could mass murder other people, no matter what their reasoning.

Had they had the capacity to look again until they see something they didn’t expect to see… the gas chambers and the Final Solution would not have been so successful.

You are not different… You are fodder to the machine, the evil machine.

And you are not even having fun. Because to have fun, you need to look until you see something that you didn’t expect.

Only very few of you will do what I am asking of you. Why? The rest won’t even understand what I just said.

It doesn’t jive with their matrix.