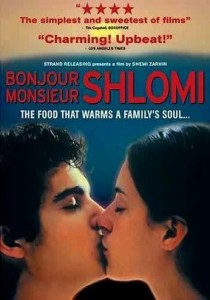 What we are doing in the Second Phase Activators Course, right now, is digging for the root cause of our issues.

Students are having a hard time with this exercise.

Most of us invented a way to compensate for the horror of that name to fix ourselves.

The problem is: there is nothing to fix. The original, default name isn’t true.

Today I recalled an Israeli movie I saw some time ago, ‘Bonjour Monsieur Shlomi.’ 2

It’s about a fledgling high school student. She takes care of everyone in her family, does the cooking, baking, etc.

No one pays any attention at him, he is everyone’s favorite imbecile.

He talks little, listens a lot.

One day, at a written math exam, he walks out in the middle of the exam and throws his exam sheet in the garbage…

The teacher, substitute teacher who doesn’t “know” Shlomi, fishes out the exam sheet. All the problems were solved perfectly. In a few minutes time.

The teacher goes to the principal and the send Shlomi to an examination. Turns out he is a genius.

His family goes through a major upheaval but then they accept the “verdict.” His life continues as the life of a genius.

Why am I telling you this story?

Because unless someone digs deep enough and precisely enough for the root, they won’t be able to look at it.

Incidents like this movie are not the rule, they are the exception.

Ugly ducklings that spend their whole lives being a good little duck, being useful, or acting out and becoming abusive themselves, are what we see in real life. No one ever dares to look and see if, by accident, a swan is who they are.

I was called stupid by my whole family. I was dyslexic and very near sighted. I also find it impossible to memorize anything, poems, formulas, anything.

My brain won’t accept anything put into it, I need to process it first, and most things don’t make it through.

So I was called stupid. As in “not like us.”

I spent the next 30-40 years compensating for the sentence. I went to school most of my life, I read at least one book a week, I am a veritable overachiever.

And until I pulled this sentence out, and looked at it, I lived my life knowing that I don’t deserve much, that I won’t accomplish much.

At one point I spoke seven languages. But there was no joy in that.

In one word, I found out, like Shlomi in the movie, that I am unique and maybe a different species altogether.

When I first asked Source to do this work, I got a flat no for an answer.

I am not someone take a no without looking at the reasons, and found out that in order to teach human beings, you must behave in a likeable way, and in that department I was waaay behind.

I was your typical off the wall nerd: no social skills, no tact, nothing.

And that was real. And that is, actually, what prompted me the most in raising my vibration.

Becoming a human being that others like to be around. Wasn’t easy.

But I tell you, much easier than succeed in spite of being billed as “the stupid one.”

2 thoughts on “Digging for the root cause of our issues… maybe you have been an ugly duckling, unaware…”