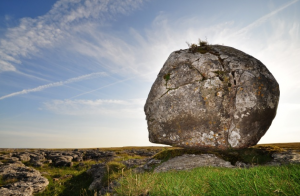 When you decide on direction for your life, you suddenly find yourself with obstacles blocking even your view of the horizon, let alone your path.

Your reaction to it will be two kinds… in my experience.

I am in the middle of one of these, so this article is very timely for me. Let’s hope I can get myself unstuck.

Some thirteen years ago I learned a valuable way of looking at making life meaningful, or living a meaningful life. The teacher suggested that we pick a horizon, a direction, and then look what’s blocking the way of getting there.

Since then I saw that even seeing the horizon is blocked… Blocked by seven boulders, lined up one behind the other, blocking your view, blocking your movement.

So, in my coaching practice, when I ask people to set a direction, and they can’t see any, I am inclined to suggest that they choose the direction: living a meaningful live, or a fulfilled life… without specifying what it is. For me, currently, is targeting a ‘crowd’ that is talented, ambitious, and yet not successful… maybe because they need coaching? hint… hint…

The first boulder, in my experience, is always your soul correction’s character flaw, or weakness

The second question is: what can you do to eliminate the boulder? You can’t go around it, above it, or under it: you need to eliminate it.

Without eliminating the character flaw, your access to a meaningful life is blocked.

Arrogance covers up fear. Fear of not being good enough. Fear of having overestimated myself.

How do you use deliberate practice to eliminate the stumbling blocks the soul correction puts in your way?

You can use deliberate practice for a lot of things, especially to become an expert.

But most people are not “prospects” to be trained to be experts. But why?

Some inherent, or seemingly inherent character defect prevents them from even getting into the game of life, fully.

Soul correction is an inherent character defect, an inherent world view, mindset, that unless it is corrected, results in the person living a substandard life, a life of quiet desperation.

So what would someone like me with doubts about my abilities do, practice, to get over that hump?

I do not think I can eliminate that character flaw, by the way, but I can see that I can get it out of the way… but not permanently. Come the next project, it will be there in its full glory.

From Kabbalah’s point of view, the purpose of life is to overcome and correct this character defect, so the person can start living a meaningful life.

So, in my case, a more meaningful life will come from mustering the courage and starting to practice and get better and trusting not so much myself, but the process, that if the process is good, then the results are inevitable.

Wow… I have never seen that before… wow wow wow.

In the next part of this article, I will highlight a few different ways your soul correction may rob you of a chance for a meaningful life.

What is deliberate practice?

In addition to the practice being deliberate, there are two additional elements, that without them the practice will not bring the desired result: character defect neutralized.

Being able to see and create patterns is an intangible capacity…

…that with enough practice turns on by itself, but when you want to deal with your soul correction character defect, not having the capacity creates a catch 22 situation. I have been able to turn on the capacity successfully for people, and the difference in their behavior, what they see and notice is dramatic. I don’t use this word often: actually this has been the most dramatic of all capacities.

the capacity of being able to create a mental representation

The second needed capacity you’ll need to cause lasting and maybe permanent correction of these character defects is the capacity of being able to create a mental representation, a detailed image of the result you seek: a life not hindered by the character defect, the new behavior in the trigger situations.

I see it sorely missing. If you don’t know where you are going, you’ll not get there, you’ll not see how far you are from it, you won’t see your errors.

Now, let’s look at some character defects that I can see can be corrected with deliberate practice, and a shift in how you look at them:

So, now that you have found your character defect that you can see may stand in the way of you living a meaningful life, what can you do? What should you do?

Tomorrow’s webinar, is open for registration… the seven boulders method.

If you have had your Starting Point Measurements done, you can participate.

It’s free… until I work out the kinks…

The webinar workshop, as is usual, will be on Wednesday at 4 pm, EDT
10 pm Continental Europe
9 pm British Isles
1 pm California

If that time zone doesn’t fit you, but you are available at other times, please let me know what you suggest… this is especially for my two Chinese clients… If there are enough participants, I’ll schedule a webinar that suits you.

Go to step 2 to register in the webinar

2 thoughts on “What if you have something blocking you from growing? The Seven Boulders principle”