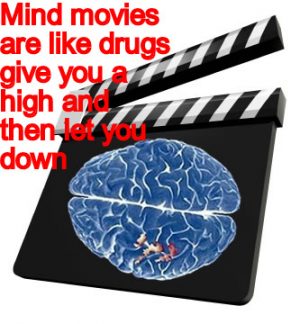 Yes. Mind movies and vision boards are a mental representation of some fancy that you have… creative or not so creative visualization. Low vibration, low consciousness, wishful thinking stuff. 3

The main difference is how realistic the “dream” is… how much of the groundwork is done and already in place.

If I created a mind movie of me writing an 80 thousand word book, you can predict that in about three months time I’ll be ready with the writing part of the book. But would still have to go to an uncharted territory of having it published… and you can almost guarantee that I would not know how to do that! 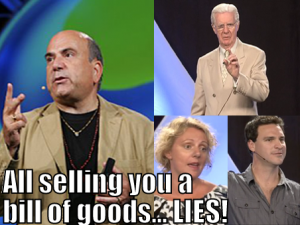 If you created a mind movie of being a celebrated author on a worldwide tour to speak in front of thousands, but you have no topic, no experience, no habit to write, what you can predict is that unless you have a ghost writer, this is quite a pipe dream.

The difference is whether you are worth a damn in the area you dream about or not.

Your track record is important. It shows your starting point, it shows your current skills, maybe even your attitudes.

My site gets 200-300 visits a month by people who want to make their fortune through making mind movies.

What is predictable is that they are certified beggars… people who have a track record of wanting something for nothing, who wait for the money to roll out of the woodwork and into their hand. Sold on a lie of how the world work. 4

It is hard to escape the hype of the fake teaching: create whatever you want with words, imagination, prayer, energies, whatever.

It is hype, and it is a lie. Very popular among losers.

My site gets another 200-300 visitors a month that want to match their vibration to what they want, so they can then automatically attract that thing: money, love, success. What a bunch of huey!

What is almost never said, almost never taught, is that you can grow out of any circumstance if you become too skilled for the job you are currently doing.

One of my readers is a cab driver in a big city. Last time we spoke he told me he was fretting because he didn’t know the city well.

Not a good way to be a cab driver, but everyone has to start with nothing. 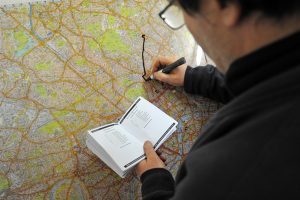 In the Peak book I talk so much about, one of the examples the author gives is the cab drivers in London: you don’t even get a cab there unless you know your city inside out.

For most people it takes three years diligent study and practice to know London. 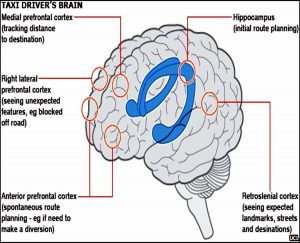 I learned Budapest in one year. I learned Jerusalem in another. I learned New Jersey and the Metropolitan area of New York in four years. Syracuse took me three years: very complicated. I learned them not as deeply as a London cab driver needs to know every building, every sculpture, every institution, but just enough to find my way easily to any destination.

You need to invest work into becoming an expert in your work… instead of barely getting by.

And know that you only have so much glycogen available, so you can’t spend it on irrelevant stuff, or you won’t have any to spend on becoming an expert.

I have yet to meet a person who lives as if they knew this.

I watch people doing the irrelevant, unproductive, and the easy, leaving the difficult, glycogen needing tasks to the end.

I also watch people who mistakenly hope that funny memes and inane articles, and stupid interactions on social media will give them energy… They actually use up as much energy as if you were creating something, thinking deep thoughts, etc.

I spend an hour a week with funny memes. A block of one hour.

I spend no time on social media.

I read. Reading refills your energy coffers. It uses less glycogen that it gives back to you.

When I am really tired, I read lighter books. Books that put me in a lighter mood. So I can sleep better.

When I am tired after eight hours of working straight, I read in bed. I get up energized. Not sleeping, refilling my batteries.

Now, let me tell you a few things about myself that you probably don’t expect:

I am not very smart.

The part of smart, where you are quick to understand, quick to wrap your mind around stuff that someone describes from their experience, their knowledge, their world: I have a really difficult time to understand, and be able to follow.

Especially when it is about something that needs to get done.

And if I don’t understand I can’t do it. I have to understand.

When I took my first class in programming, I had to take the class three times before I got the first thing about it.

People have different strengths, and this is not one of mine. There is a translator that is missing in my brain. I weep about it from time to time.

It is hard for me to move even first base. I get discouraged. It is not a good feeling to feel completely stupid.

I just watched a video where a famous marketing guru is sharing that years ago he watched other marketers make a killing where he could not see what they were doing. But, at the same time, he was asked to be the marketing manager of a guru… who said: I would not hire anyone but the best.

So what he could not get did not stop that other guru from seeing him as the best.

He worked for this other guru and learned the stuff he had been missing on the job. Now he is the go-to expert at “marketing funnels”, which is a big thing, a big money maker… the stuff he had a hard time understanding on his own.

I’d love the opportunity to work with this guy… if I could afford it.

What there is to learn from all this, for you, is that unless you learn, however you learn, you won’t amount to much. You won’t be worth a damn.

A mind movie is not really a map to get to your destination: it is not going to help you, unless you are willing to do what is required of you to learn to do what you need to know to do get there.

In this guy’s case, and my case: marketing. Not ABOUT marketing. DOING marketing. At this point it leaves me puzzled, feeling incompetent, stupid, and left behind.

I am contemplating volunteering my work to this guru or another, so I can learn through immersion, through osmosis.

I want to do it for free, and for years, because if I live that long, it will pay huge dividends.

Who cares if I can’t watch a Netflix show for a few years?!

When was the last time you said anything like that?

PS: Obviously this article will offend the clueless misguided “attraction” minded people. I didn’t write it for them, and I don’t mind offending them. I don’t expect that they will change their minds, and I have nothing to offer to them.

I am writing this article for you, if your worldview is closer to how the world is, how reality is, how reality works. And if you are willing to use your life to work for what you want.

You aren’t? You’ll hate my site.