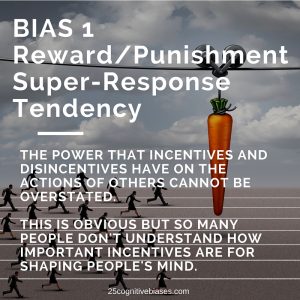 The power that incentives and disincentives have on the actions of others cannot be overstated. Munger says this should be obvious but so many people don’t understand the how important incentives are for shaping people’s motivation to complete a task.

Incentives and disincentives are extremely important in changing behavior.

“If you would persuade, appeal to interest and not to reason”

“Never think about something else when you should be thinking about the power of incentives.”

‘The most important rule in management “Get the incentives right”‘

“Bad behavior is intensely habit forming when it is rewarded.” 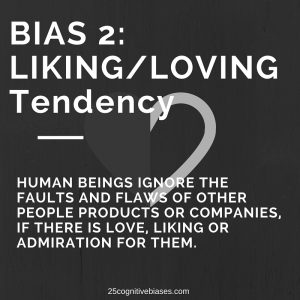 We ignore the faults of other people, products or companies that we admire.

According to Charlie Munger, a newly arrived human is born to like and love, and the strongest inborn tendency to love is that of a mother for its child.

Liking/Loving tendency makes the liker or lover tend to:
To ignore the faults of, and comply with wishes of the object of its affection.
To favor people, products and actions merely associated with the object of his affection as seen in bias 10 – influence from mere association.
To distort other facts to facilitate love. 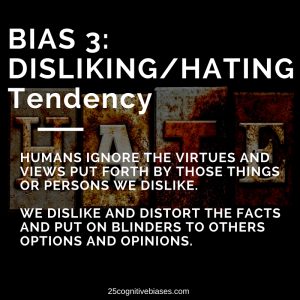 We also ignore the virtues of those things we dislike and distort the facts to facilitate that hatred while putting on blinders to other options and opinions.

1) Ignore the virtues in the object of dislike.
2) Dislike people products and actions merely associated with the object of his dislike.
3) Distort other facts to facilitate hatred. 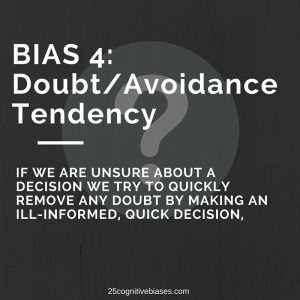 If we are unsure about a decision we try to quickly remove any doubt by making an ill-informed, quick decision, this is doubt-avoidance tendency

Doubt-avoidance tendency is triggered by some combination of puzzlement and stress. 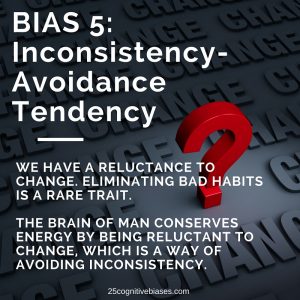 We have a reluctance to change. Eliminating bad habits is a rare trait.

The brain of man conserves programming space by being reluctant to change, which is a form of inconsistency avoidance.

Factors that create an anti-change and Inconsistency Avoidance Tendency mode in humans: 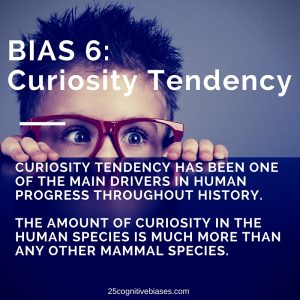 There is not enough curiosity to learn, even though you receive so many benefits from a continuous learning process. Munger says, “the curious are also provided with much fun and wisdom once formal education has ended.”

Curiosity tendency has been one of the main drivers in human progress throughout history, the amount of curiosity in the human species is much more than any other mammal species 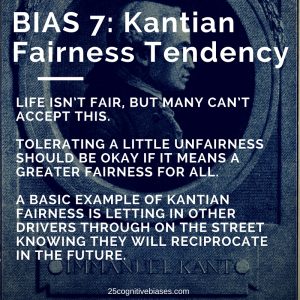 Life isn’t fair, but many can’t accept this. Tolerating a little unfairness should be okay if it means a greater fairness for all. The example Munger uses is letting in other drivers on the freeway knowing they will reciprocate in the future.

Kant’s “Categorical imperative” or golden rules consists of humans require to follow those behavior patterns that, if followed by all others, would make the surrounding human system work best for everybody. 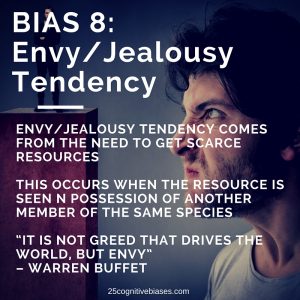 Self-explanatory, but Munger makes an interesting point that envy/jealously tendency is surprisingly absent from most Psychology textbooks.

Envy/jealously tendency comes from the need to get often-scarce food, this occurs often when the food is seen in possesion of another member of the same species

“it is not greed that drives the world, but envy” – Warren Buffet 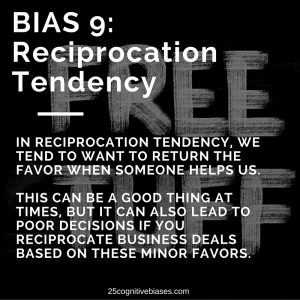 In reciprocation tendency, we tend to want to return the favor when someone helps us, which can be a good thing at times, but it can also lead to poor decisions if you reciprocate business deals based on these minor favors. 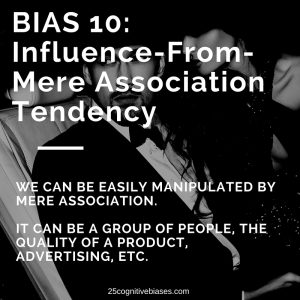 We can be easily manipulated by mere association. It can be a group of people, the quality of a product, advertising, etc. 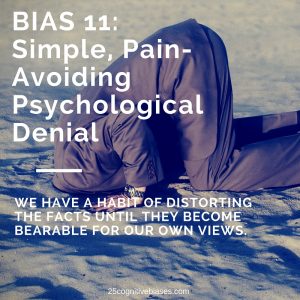 We have a habit of distorting the facts until they become bearable for our own views. 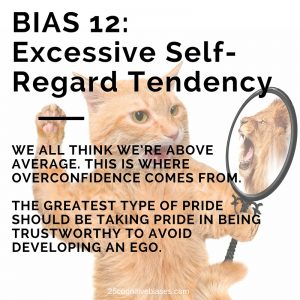 We all think we’re above average. This is where overconfidence comes from. Munger says the greatest type of pride should be taking pride in being trustworthy to avoid developing an ego.

This is the sickness of dictators… 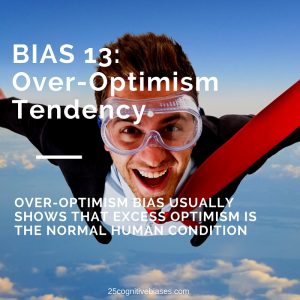 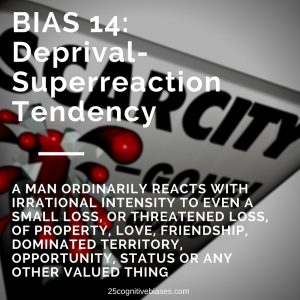 Deprival-Superreaction in a way is loss aversion. Loss aversion refers to people’s tendency to strongly prefer avoiding losses to acquiring gains. Most studies suggest that losses are twice as powerful, psychologically, as gains.

A man ordinarily reacts with irrational intensity to even a small loss, or threatened loss, of property, love, friendship, dominated territory, opportunity, status or any other valued thing 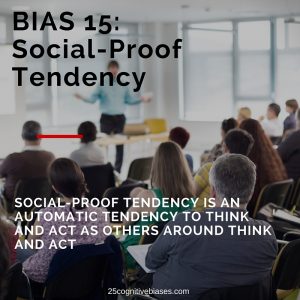 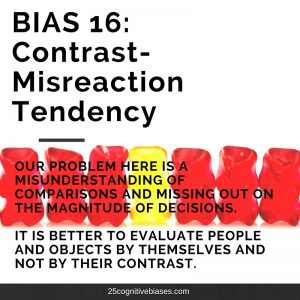 Our problem here is a misunderstanding of comparisons and missing out on the magnitude of decisions, it is better to evaluate people and objects by themselves and not by their contrast.

An example of Contrast Misreaction Tendency

Contrast Misreaction Tendency is routinely used to cause disadvantge for a customer, making an ordinary price seem low, a vendor will very frequently create a highly artificial price that is much higher than the price always sought, then advertise the standard price as a big reduction from his phony price. 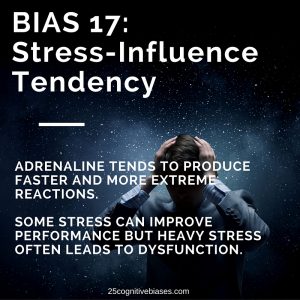 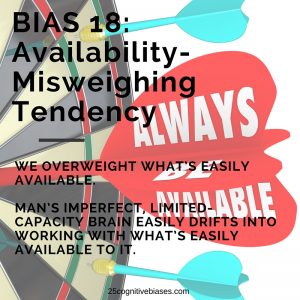 We overweigh what’s easily available. A checklist or set of rules can help with this tendency.

Man’s imperfect, limited-capacity brain easily drifts into working with what’s easily available to it. And the brain can’t use what it can’t remember or
what it is blocked from recognizing because it is heavily influenced by one or more psychological tendencies bearing strongly on it, the mind overweights what is easily available and displays Availability-Misweighting Tendency.

The great algorithm to remember in dealing with availability bias is simple:
“An idea or a fact is not worth more merely because it is easily available to you” 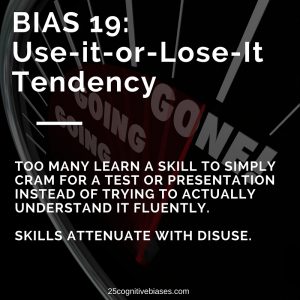 Throughout his life, a wise man engages in practice for all his useful, rarely used skills, may of them outside his discipline, as a sort of duty to his better self.

Skills of a very high order can be maintained only with daily practice.

Use-it-or-lose-it tendency postulates that When a skill is raised to fluency then the skill (1) will be lost more slowly and (2) will come back faster when refreshed with new learning. 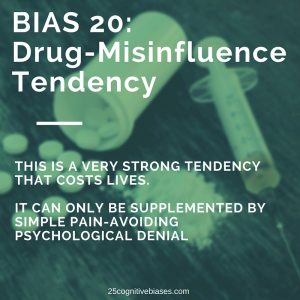 This is a very strong tendency that costs lives. It can only be supplemented by Simple pain-avoiding psychological denial (#11) 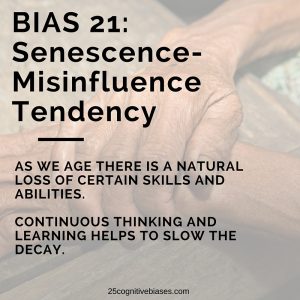 As we age there is a natural loss of certain skills and abilities. Continuous thinking and learning helps to slow the decay. 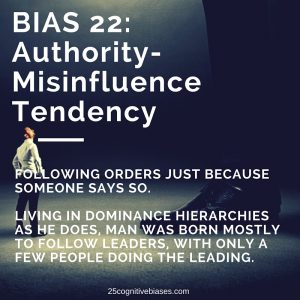 Following orders just because someone says so. 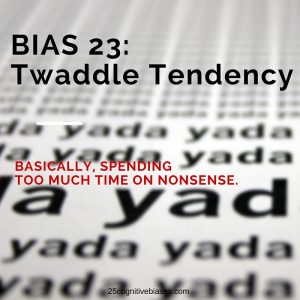 This is basically spending too much time on nonsense 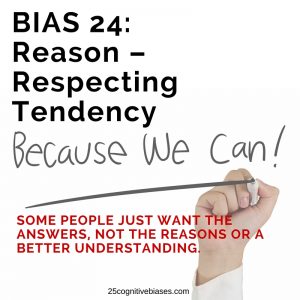 Just give me the answers 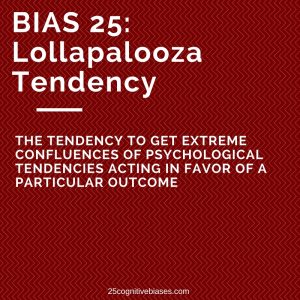