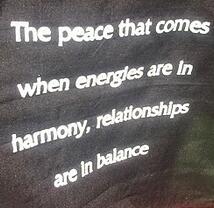 I wrote this article three years ago… even with the rewrite it has notions I no longer consider, it has mentions of stuff I have completely eliminated from my teaching. But it is worth reading: it probably bridges to the general public than my newer articles…

What is higher vibration?

This question came up in a conversation. As I was talking to Nancy, the nagging feeling, that higher vibration cannot be explained was plaguing me. You know the feeling that you know something that you can’t explain it, because words are insufficient… you feel so powerless… Right?

She guessed, that raising your vibration is getting more intelligent as in a higher I.Q. I said: Maybe. But Scientology can do that, according to Ron Hubbard, too… and Scientology used to manage to raise people’s vibration at a 10% probability, to a maximum of 295.

What would be the cause of the rise in I.Q.? one should ask, because it’s an intelligent question.

There is a very simple phenomenon that explains it: “emotions up –> intelligence down”

Simple, right? When your emotions are high, whether it’s misery or bliss, whether it hopelessness, or hopefulness, the higher the emotion the lower your intelligence goes. Why? I guess emotions cause misfiring in your switchboard, your brain, and that disorder causes lack of clarity, lack of coherence. Lack of coherence causes a significant drop in your intelligence. It also makes your cone of vision, how much of the reality you see narrower, so your judgments are based on partial data: you will make more mistakes.

In the Defending Your Life movie they point out fear only, but any kind of emotion, anger,frustration, confusion, excitement, overwhelm, sadness, greed, jealousy, sexual desire… etc. will also cause you to narrow your cone of vision, and to base your judgment on mistaken, faulty, irrelevant data.

When you raise your vibration

What you are attracted to says a lot about your vibration

Which explains why Eckhart Tolle’s audience vibrates at and under 150… and love every moment of the interaction. It is on their level, it asks nothing of them, there is no rocking the boat, there is no upsetting the apple cart, no trouble-making… smooth, nice, and makes NO difference.

To my questioning, the information I received from Source, that the vibrational frequency can rise from many reasons, but only rises permanently for one reason: direct, personal and frequent connection to the Source, to All-of-it, when you can internalize the insight you get while your boat is rocked, you know those unpleasant, horrible instances when you see that you have been pretending to be better than you are.

In that connection the dormant circuits of the person get activated. An untouched human, an unconnected human has their circuits dormant, much like as if a computer has all its chips but the wrapper is still on them. In that connection with the Creator, the wrappers get removed, one-by-one and more and more of the design is available to utilize, moment to moment. The view-point of the individual shifts, slightly to the side and up on a slight elevation, so the emotional involvement in “stuff” is reduced or disappears.

One can learn to connect, or one can enter the connection using one of my many audios where I lead other people to connect… while they actively listen to the audio, following the instructions I give to the people on the call, they are in that connection and get what you get when you are connected.

Some energy teachers/practitioners I have examined, so far, must have been in this type of communication, but at some point they started to live out of human knowledge, instead of Divine Connection, or maybe have turned to a lower plane energy, the fourth or the fifth plane, where their experience of power is greater, but their connection with Source is disconnected while working with a lower plane energy.

You see, the Creator doesn’t play favorites, but those lower energy entities may.

Although you can do very spectacular things from those lower places, it is, in some way, dabbling in dark magic.

The only plane where dark magic doesn’t live is the seventh plane… and, although entertaining, titillating, fascinating, the lower planes are a deviation from the original design. We created those, those planes, with our imagination, and have breathed life to Dark energies.

These planes, the products of our imagination, gods, saints, angels, ghosts, were a by-product of diluting the Creator’s all too brilliant energy to something that can be tolerated by a physical universe. With our limited perspective of reality, we felt a need to create “planes” of existence that are similar to our own, but more powerful… it was a way to deal with uncertainty and fear of natural catastrophes, like lightening, earthquakes, volcanic activity, and such.

My view is that the entities on those planes were and are created, and perpetuated by humans. Humans are made of “thinking stuff” and can create with their thoughts. Because humans think human-centered, those entities resemble humans, in their moodiness, viciousness, and other negative ways. I’ll write about that in another article, when I have the courage to visit those planes and feel protected… not yet, not yet. 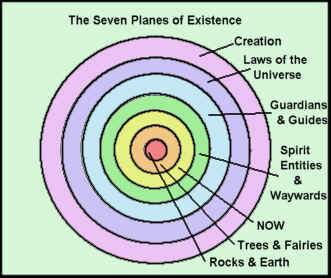 First. physical, the plane of minerals, stones.
Second. plants
Third. protein based life, humans
Fourth. is where totems (animal spirits), shapeshifters, and many ancestors’ spirits reside. Shamans use the energies of this plane to do what shamans do. Many limiting belief systems come from this Plane.
Fifth. the astral plane of dualism–the plane of good and evil. It is a very divided realm with High energies of Gods, Goddesses, Guardian Angels, Legions of Angels, Guides, Christ, Buddha, Jehovah, Yahweh, Heavenly Mother and Father, and Councils of 12, along with Fallen Angels, demons. Beliefs from this Plane are: trading one’s power for another, having to prove oneself right or battle against an opposing force with sacrifice. Using this plane you always pay the price… With your health, with your freedoms, etc.
Sixth. According to Vianna Stibal, this is the plane of the Laws… I have no experience, no concept of this plane.
Seventh Plane of Existence: The plane of creation, the plane where you can directly connect to The Creator of All That Is, and in this connection raise your vibration, permanently, so you can have the life of a higher consciousness, or a higher vibration. This connection
* eliminates ego and sickness
* allows us to know the Highest Truth
* frees us from being committed or obligated to the laws or rules of other Planes of Existence

More on the seven planes of existence: https://www.thetadnaactivation.com/medical2.html

As you see, this whole deal of raising your vibration is connection based, not flashy, not spectacular. It was meant to be, going home, no fireworks necessary.

Higher vibration is your birthright.