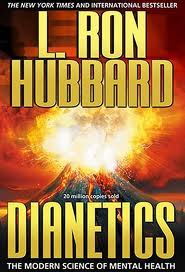 What is the theory? When you are unconscious from pain, from anesthesia in surgery, or simply sleeping, your “reactive mind” is still awake and is recording every sound, every smell, every sensory feeling, every sight. Later on it considers every sentence that you heard while unconscious as a command, and every circumstance, including the smells, sounds, feelings as a trigger to either dramatize or live out the scenario, as it was done to you. The incident is stored in an engram, and you can retrieve the contents of the engram with your conscious mind if you follow the audit procedures with a skilled auditor.

I know this is a mouthful, so I will give you an example, mine.

When my mother was pregnant with me, my father forcefully had sex with her. The trauma to the fetus was severe, and the conversation that I overheard was something to the effect of “I don’t want you, You are a go away, you are horrible, you are unlovable…” These must have been what my father thought. And I also heard that I was just a tool for a man’s self-gratification, not part of it, not there to enjoy it, not there to be considered a person. That must have been my mother’s thoughts.

Now, you must understand, that I have not done an audit per se… I did something similar about two incidents, accidentally, quite a few years ago, in one I was raped, in the other I was molested. I had had a lot of me tied up in those incidents, and I got all that was tied up back… the feeling was amazing. The quality of my life soared compared to before.

I haven’t done my prenatal/pre-birth traumas, though my identity was really formed there. I am planning on doing an audit as soon as I can find someone to do it with. I will do it with someone on the phone, though I don’t think scientology offers or even approves of that: I will just get a coach that can follow instructions.

In my conversation with Source, I gleaned some important aspects:

OK, there you have it.

If you want the most expeditious and most economical route, you’ll get the activator downloads. If you want to go full tilt boogie, get an auditor for as long as it takes. I am not an auditor, but an auditor is not even a coach, and I am.

Why does this method raise your vibration in spite of the fact that they do not connect you directly to source? This is a great question, and points to the fact that bringing a mechanism to the attention of the conscious mind actually allows the conscious mind to disable it. (Which means that dianetics can successfully alter the contents of the subconscious with the audit.) Once the triggers (the sounds, the sights, the sensations) do not trip the machine, you have more of you available for life. 2

One of the aspects of auditing is that the auditor does not have any input to the content of the session, only the standard instructions, which makes you, the audited person (pre-clear) the active component of this process, and when you are ready to see what you see, it poof, disappears the engram. No I can see why, in many cases, I have been a lousy coach. I have done their work, for them, and that didn’t do the trick.

I did the 6-day program with its anger process, or the bathing suit process… It was there that I came to terms with one of the molestation incidents, and gained access to seeing it with my conscious mind, from the side… which is the first step of gaining some distance and freedom from an incident.

I had been wondering what was the cause of my sudden rise in vibration back in 1985, as a result of the first Landmark Education event. When I saw, suddenly, that I had a delusional decision that was fueling discontent, anger, and self-destructive behavior: that my father was supposed to marry me, but instead he left me for my mother.

Once I saw that sentence pulled out of the “reactive mind” I laughed and I cried. But I was clear from it. I could stop hating the whole world that could have love, and relationships… while I was going to be a “jilted lover” forever.

Now, this jilted lover as a mechanism hasn’t been quite disassembled…

As to the Church of Scientology… I have nothing to say. They look and feel cultish to me, an evil bunch. And L. Ron Hubbard on his video interview, looks and sounds smug in an unattractive way.

Next coming up: Wallace D. Wattles and his three “The Science of…” books. It will be a nice change of pace after Dianetics… lol