In numerology, each number has a special meaning… and even the components of your final destiny number…

I like 4. Four symbolizes a chimney: there is only one way to go: up.

Most numbers have sideways moves… and that is what most people do to avoid growing. To avoid what it takes, work, pain, telling the truth… avoiding these at all cost… even if the cost is everything and anything they ever wanted…

So as a coach, I have to take them to a magical turning point: I need to force them to hit bottom. If they let me… 🙁

I had two workshops yesterday… And in the second, two of my participants volunteered to declare that they hit bottom.

What was the magical ingredient? They got confronted with their numbers… What numbers? I’ll get to it… patience…

Any numbers that show how you are doing will be good.

I can measure a whole slew of numbers, by connecting to you, to Source, and muscle test while I am connected.

I can measure numbers about your health… any organ, any process, no problem.

I can measure your emotional state… in numbers.

I can measure if what you are saying is true, false, and whether you can tell the difference.

So in yesterday’s Playground session, I asked the participants to put something at stake… get conscious about why they are in the course, so they can start to consciously generate their participation… instead of hoping that what they do will produce the result they hope to get.

The majority of people live in hope, especially because they have no idea what to measure, how to measure it, and therefore they are not able to grow anything… whatever you cannot measure, you cannot improve it Lord Kelvin said that. (Who was Lord Kelvin? Google it… he was a famous mathematical physicist, a Scottish dude… in the period of time when the Scots invented modern science, and the modern world… fantastic book, read it.)

So yesterday I got a dose of that: I muscle tested for people in the course what is the potential value they can get based on their participation… thus far.

The range of potential values went from one million dollars down to 60 thousand dollars. Same course, different level of participation.

The $60K people (two) got suddenly waken up to the fact that what they have been doing, how they have been being wasn’t working… And one of them declared hitting bottom, and a student with a $100K value also did.

What happens when you declare hitting bottom? You start a whole new life, that is what happens. You abandon the old way, and make room for a new way.

Now, there is a tricky part: if your word has no power, if your integrity is too low, your declaration is an expression of a wish… No true breaking with the past.

Why and how the hit-bottom method works?

It is easy to see in reality how the hit-bottom method works: when you hit bottom, you stop and look. There is  a moment, a rare moment, where you cannot flail, you need to look.

You can look long enough to make an intelligent decision about the next step to take. You CAN take yourself out of reaction mode and put all your attention on the now moment, completely see the situation, and then act, also from intelligence.

I am not saying you will… I am saying that you can… All a matter of intelligence… that you may not have enough of. 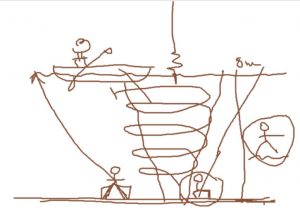 I learned this from experiencing it some 56 years ago when a lightening storm on the Danube hit the water next to my kayak and pulled both my kayak and myself deep into its vortex.

The kayak promptly broke because it resisted. I, on the other hand, allowed the water to take me down without resistance. When I hit bottom, some 8 meters deep, I allowed my knees to collapse. With eyes open under the water I soberly and consciously looked, I identified the center of the vortex, and deliberately kicked myself away from it, thus survived to tell the story.

The same method, hitting bottom, is applicable in business, and every other place in life, also in relationships, career, choosing life direction, etc.

I could have died in that incident hadn’t I had the hitting bottom mindset. The air in my lungs would not have been enough for “trying” to get away, “trying” to get afloat… I call these flailing. I would have surely drowned.

Flailing is, by the way, it is dangerous to try to save a person from drowning… their flailing will kill them and you, the rescuer, as well.

I have been teaching this mindset, but people don’t get it. They get scared… akin to flailing. First they don’t get the mindset, second their ego doesn’t allow them to practice the mindset, third they are not able to pull all their awareness into the present moment… meaning GET PRESENT.

This has been one of the most puzzling things for me all these years, until yesterday.

You see, until yesterday I didn’t realize that there are three components that all need to be present for someone to be able to pull this off.

I have been teaching skill #2 and #3, but haven’t taught skill #1. It is a combination of knowing and trusting. Trust is a capacity, and it is very different from belief. Trust is an ability to just be, expecting nothing, certain, because you are connected to all-of-it. Trust in your Self. And stay alert… trust and diligently verify…

I haven’t taught #1 because it is the hardest thing to teach to people who want to understand things. It is not possible to understand #1, the moment you understand it, it becomes a belief. Belief comes with doubt… coupled.

Truth believed is a lie. Truth lived, truth felt, truth acted upon stays truth, but the moment you involve the mind, it becomes a lie.

The principle one must live by in #1 comes from the discoveries of Quantum Physics. From the experience, that reality is an approximation. That where a particle is, whether it will be wave or particle, depends on the observer’s expectation.

In that state of just being Consciousness, the Eternal, the Beyond, the Divine can come in. The longer you are able to suspend your human machine, the longer the Eternal will reign.

Humans are uniquely equipped to create with their WORD. Note the all capital letters. I don’t mean by ordinary use of words… I mean DECLARATION. When you speak what isn’t into existence.

The only things you can speak into existence, by the way, are non-physical things. You cannot do what some Indian gurus pretend to do: manifest ashes, or some other b.s.

You can only speak intangibles… Intangibles depend on words… A Martian would not see them. They only live IN language.

Liberty, freedom, independence, love, happiness, joy, value, bold, audacious, etc. I could fill a whole page with words like these…

Hitting bottom is one of these phenomena, that only lives in language.

If you use descriptive language, the language that explains, talks about, that language does not create anything… And that is the language 99% of people use 99% of the time… In the 1%, they “manifest”, they create stuff they don’t want…

This is, by the way, the real meaning of what Plato (ancient Greek Philosopher) talks about when he talks about people living in a cave, the cave of their minds… reacting the words as if they were the thing they are talking about.

So back in August I declared: I hit bottom.

This is what I did back in August: I declared that I hit bottom. I didn’t flail. I didn’t worry. I didn’t expect. I was in silence, still, allowing the answer, whatever it was going to be, to come to me.

And the answer was: do what you need to do to live. It’s been a vertical up for me… getting better every day… a typical #4 path

From that silence a new “reality”, a whole new future can begin.

Were the things you now see, in that silence, always there? Who knows. Who cares. If they were there you didn’t see them. If they weren’t, then they are now.

Being able to do this “hitting bottom” exercise often is the most amazing process, nothing short of a miracle.

In the What’s missing workshop my job is to take you to where you hit bottom.

The less you fight it, the less you react to it, the more you can create a future… that is unexpected, and new.

3 thoughts on “Why and how the hit-bottom method works? Works well…”