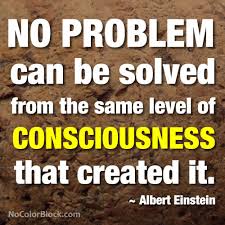 I am very lucky: the questions my students send me have caused me to have a deeper understanding for my own work.

These students are often seeking new insights in their pressing circumstances from me. Lately it is all about making a decision to stay or leave, to let go or to fight.

It is a huge responsibility to talk to people who are looking for answers.

If they use the insights I give them and don’t make them their own, they run the risk of making a decision ‘because’ I said so.

One of my students asked ‘is it a matter of meditating over this decision now?’

This particular student has been a meditator for five years. The particular form of meditation he is doing with some master is to open up his ability to gain insight from All-of-it.

And this seemingly intelligent move, to meditate to gain insight is what I want to talk about today.
If you are a ‘normal’ human being, brought up by parents or caregivers, if you went to school, if you live in a family or any other community, you are conditioned to have a worldview that is airtight.

It is the worldview that considers society, family, country, a life-partner, important and inevitable.

‘This is how it has always been…’ it looks, but it is not true. All those ‘institutions’ are against the Original Design.

Ever since those institutions have been in place, human consciousness has not grown.

Albert Einstein said: ‘No problem can be solved from the same level of consciousness that created it.’ People quote it, then they knowingly, smugly smile, as if they knew what they are talking about.

Consciousness levels are not linear: in consciousness there are huge jumps. One such jump is going from being an effect to being a cause.

At this very moment, only seven people have made that evolutionary jump, the rest of humanity are still in the ‘effect’ bin…

Human Being, the consciousness we call ‘human being’ as an evolutionary stage, was caused by a single digit number of people, millions of years ago. And just like in other areas of life, this number didn’t change with the explosion of humans living on the planet.

Why? Let me talk about one aspect of this, that I just saw today.

As a spiritual innovator, as a self-appointed avatar, I have been dealing with the question for quite some time: why is it that people that have attained that evolutionary jump, (call it enlightenment, if you want,) have made no difference in the number of people that also reached that stage?

Great question if I don’t want to be just one of those people who tried and failed… would you agree?

If I consider myself and my experience typical in any way, without hearing and internalizing coherent thoughts of masters I would have never gotten where I am. And the process is never-ending, I still read a book a week, by masters. Transcriptions of talks.

Unless you are shown the inner workings of the ‘next paradigm’ called ‘consciousness: human being,’ I would still be only having the picture of the world as it is, goodness, truth, beauty, where the other, community is more important than the individual.

For me it began with Landmark, then Werner Erhard and Associates. …and continued with Ayn Rand’s books!

I learned bricks of the new paradigm exactly the way I learned languages. The similarity is not accidental: languages are accurate mirrors of the predominant worldviews of the societies that speak it.

The tone of voice, the timber of the voice, the words, the phrases are all consistent with the worldview.

Have you ever noticed that men whose mother tongue is Arabic, speak with a high-pitched voice, and really loud as well? You’ll notice the same phenomenon with Hindu men.

Why? Both cultures consider life on this planet just a necessary evil, and they hope to live eternal bliss in the afterlife. Which comes from the ultimate low of no responsibility, of being an effect.

Buddhists, from the same countries, speak with deep voice: there is no god in Buddhism.

Chinese is also a godless society: pay attention to their tone of voice.

Also, listen to the difference between women and men: societies that suppress women’s education, or them going to a place of worship: women speak with a deeper voice.

Now, I may be just imagining these differences, so please don’t argue with me if you think I am mistaken: what I am trying to convey is this: the language is a reflection of the dominant worldview, and it is near impossible to think outside of that worldview without adding words, or re-negotiating the meaning of old words.

This latter is what Werner Erhard did: he added new meaning to old words. Big mistake, if you ask me, but this is what he did. He should have used, created new words… but then it would have been even more cultish to be an est-hole… lol.

The revolutionary distinction that he taught was the distinction of responsibility. He, single handedly, could have created thousands of ‘enlightened’ beings, but he didn’t. Why?

Because of two reasons:

But what can a single person do? What would be a course of action that could be causing the students to ‘jump out of the water, look down and say: ‘water!’ before they splash back into the water again?’

Sometimes that profound insight can be enough for a person to start on the journey of self-realization, of individuation, of developing responsibility. Can be… I said, I didn’t say ‘will be’.

It is possible that if the fish sees the water through the mind, it won’t make any difference, it will become just one more piece of information.

This is why my main effort has been to get people out of their mind long enough so that their intelligence, the no-mind seeing/hearing can develop.

The Harmonize The Planet audio seems to do miracles in that arena as well: getting you out of your mind!

It is like being in the presence of a giant being with his giant ‘aura’… you become like it by means of harmonizing or entrainment.

I have always suspected that just talking would not be enough.

And that’s why I started to poke the box, and see if any gene that can be turned on or off (not all genes are like that!) could be holding humanity back, including Werner Erhard… blasphemous statement, but so be it.

I found four genes that unless they are in the right position, two of them off, two of them on, responsibility and the resulting enlightenment, becoming a human being is impossible. Huh? yeah.

Get your DNA adjusted
I close the shopping cart at midnight on Wednesday. So don’t dawdle…

And if you just want the racket course to study up on why your life doesn’t work, and why it seems to be the same thing over and over again… here is the link. Landmark teaches the racket, and not surprisingly no one is able to get the benefits: without the responsibility gene active it is not possible. So what you see instead, what I saw instead, was Landmark staff telling you: ‘it is just your racket’ pointing fingers. Blaming. Not any person I have ever tested has the responsibility gene on… not any. It’s a freakin’ gene, for crying out. Unless you inherited it from one of your exceptional parent who most likely turned it on by crawling through broken glass, figuratively, to get what they wanted, and thus caused an epigenetic shift… i.e. turned on the capacity that says: ‘if it is to be it is up to me’

OK, here is the link to just buy the Racket course…

Get the Racket Course

4 thoughts on “Albert Einstein spoke about the levels of consciousness”