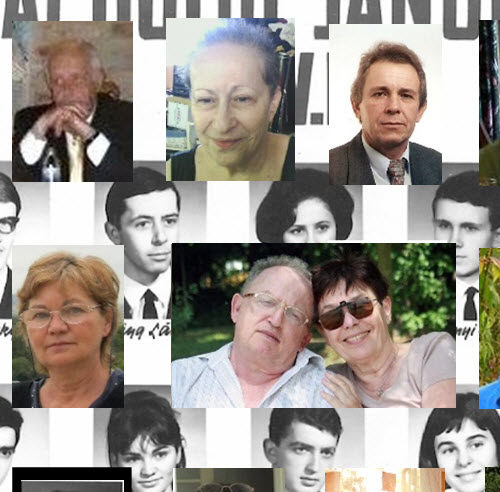 I wrote this article in 2016. Nothing much has changed… I got older…

As you know it is the 50th anniversary of my high school graduation.

I had a bunch of extraordinary folks as classmates: they have been meeting every year for the past ten years… and this year they decided to redo the yearbook, which is not a book in Hungary: it is a big board with everyone’s picture and their names.

In addition to that they decided to ask for a report from each student, to document their 50 years since graduation. I sent in my report, and I made a new picture with my webcam.

I received the report about their last 50 years, from 22 of my still living 33 class mates from the best high school in Hungary. (The school was so good, they wanted me to leave, because I wasn’t good enough, at age 16. My father had to bribe the school to allow me to stay.)

Three people have died. Of the 37, 34 went to college or University. All graduated and have lived a successful life. Unusual.

Reading all the reports I had a few questions in mind:

I read, and muscle tested.

Could it be seen already in high school?

I didn’t see it. But the successful ones found themselves, and chose jobs, changes, based on who they are.

Hungary went through a lot of political upheavals, and most everyone lost their jobs when the big system change happened. When? Around 1985, I think.

The people in the class who report on loss of health, and loss of happiness are the ones that were pulled by their urges hither and tither.

I consider myself not successful. In spite of many turns, in spite of many health issues, and unhappiness, I finally got to a place where I can say: I am reasonably happy and healthy. I make a living. I love what I do and I am good at it. I still don’t feel successful… but it is a neutral feeling. No grief, no regrets, no shame. Just objective assessment.

It took me almost 50 years… better late than never.

Now, I am almost certain that you’ll have questions about self-discipline, and about consistency…

Lack of consistency has a synonym, unreliability.

When someone cannot count on you to do the things you said you would do, be the person you said you’d be… then you can be considered unreliable, and success will elude you, in every area of your life.

But why would you choose to be unreliable?

My hunch is that the underlying avoiding domination ego move is what is working.

And even underneath that, there is a lack of trust in Life.

Why? it doesn’t matter. What will matter: are you willing to take on trusting Life, and stop resisting the domination of your own word?

Most people avoid domination, but the most important avoidance is avoiding the domination of their own word: I will be? I will do? I will have? Hell no! they say.

Why? it really doesn’t matter.

If you consider that you can start a new life every moment, with the choice you are making in that moment, that choice is more important than justifying why you junk your word, why you are resistant why you avoid causing your own life.

Your automatic, knee jerk reaction creates a life of no success, but that is not what we want to call causing.

If you live in your mind, if you cannot think constructively, if you don’t use reasoning, then you are not conscious… so you cannot cause.

Causing is choosing, carefully, after consideration, the behavior that will create a life you can be proud of, a life you’ll live powerfully.

If you look into it, the common element is YOU… the Self… that you know.

PS: I just listened to Step 55: The seven habits of highly unsuccessful people… As usual, Tai is talking about the exact same things… I wish I could share it with you… Can’t because of legalities.

It asks you to look what actions, attitudes, habits, goals would render you highly unsuccessful in the four pillar areas of life, health, wealth, happiness, and love.

Priceless. That one episode is worth the price of the whole program.

PPS: Even though I only consider myself somewhat successful now, because now I am well, emotionally and physically, from the world’s viewpoint I was successful most of my life. The world doesn’t care about your health, or how you feel.

When I look back, I see clearly how I developed both the Self and the consistency habit, while in high school.

At the end of year two (I don’t know how to say it in American, sorry) I was third from the bottom, in grades, and the school asked my father to take me to a school that is better suited for my level.

I remember saying to myself: I am better than that… or something like that.

Then I reorganized my life for accomplishment.

I found all the ways I was wasting time and energy, and dropped it.

I went to bed when my parents left their respective offices, so by the time they got home, I was asleep.

Slept about six hours and got up around 11 when they were going to bed.

I studied till 4-5 am, and then went back to bed for a nap till 7, when it was time to get up and go to school.

Some mornings I didn’t take a nap: I went to swim training, or to gymnastics training…

In six months I became the third from the top, and by graduation I was second, bested by only one person.

The ability to whittle down life to what is important, has served me all my years.

I just wasn’t healthy… until I brought the same rigor to the issue of health. Trimtabbing instead of sweeping changes and campaigns. Consistency.

I brought that methodology to the area of personal growth/emotional intelligence.

While people around me went for the home run, I took small deliberate actions, looked what worked, what didn’t, and made tweaks, correction. I wasn’t in a hurry. I had the long range vision… steady, consistent.

I used the Anna Karenina Principle and achieved everything I achieved with that: through elimination instead of addition. Instead of adding new things, complexity. What remains is a skeleton of activities, a few ways of being, and an effective, productive life.

Of course if you are not up to anything… there is nothing I can do for you.

But if you are up to something, there is a chance that you can learn to follow the method that works.

And if you have any doubts, all the 1000 I have looked at has got to where they are through this same method.

They struggled with what they needed to do. They identified what was the activity that they had a problem doing well and doing fast. They learned to do the activity first like an average, and then took it to the level of excellence.

This saved them a lot of time, so they could move to the next stumbling block… an activity that blocked their success…

While they built competence they created time to build more while they also had time to enjoy life.

This is not about becoming busy… not at all.

This can also be called the Trimtabbing method…

Get daily coaching to keep you on track