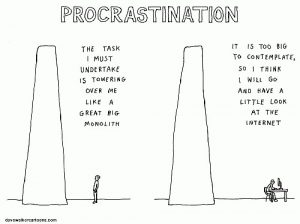 When you have something to do but you don’t do it, your life starts going in a tail-spin, heading towards the rocks. It seems that what there is to do is so terrifying, so painful, so unbearable, that even ending up on the rocks is better.

If you are a procrastinator, your motive power is to avoid death, instead of loving life.

When you actually do the stuff you’ve been putting off, it always turns out that it is not that horrible. And, although you would think that next time it will be easier, you’ll find out that next time it’s even harder, even though you’ll remember that it wasn’t a big deal.

Why is that? It’s a vibrational issue. You’ve gone over to the side of Death…

It is much like being cold, trying to stay warm, trying to pull every energy inwards, and not move. Counter productive, counter intuitive, and yet, we all do it, in one area or another.

Just like to ward off the cold moving your muscles works, you warm yourself up, and the issue disappear, in the case of a procrastination, with the feared item, feared issue, feared opponent, taking action will disappear the issue… but the inner logic is set wrong, and somehow only an emergency, a direct threat to your life can flip it, throw the switch for you, and you seem to have no power, you wait until the threat is big enough. 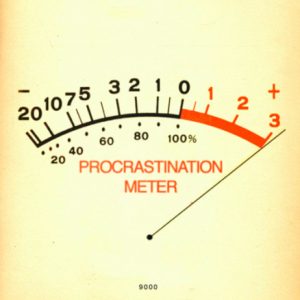 The Harmonize for Releasing Procrastination audio has been proven to throw the switch for you, so you can act without a threat at your life. It releases the stuck state, and replaces it with an ability and even a desire to act on the item you have been putting off. Desire? Yes, desire.

The audio works best if you know what you want to overcome. Best is to make a list of the items you procrastinate, put them in order of difficulty, and have the list somewhere where you see it regularly.

Do not force yourself, do not force anything. Force works counter with the audio, just allow the gentle loosening caused by the audio to take over and take you to action.

HOW does it work? The audio has a built in high vibration, that loosens your crustiness, loosens your frozen beliefs, frozen self-image, and allows for a more natural way of being. At first it takes you back in time when you didn’t resist out of habit, when you took life as it came. You had confidence in yourself, and you experienced joy at the actions you took.

Depending on your personal history of procrastination, the audio works fast or faster, but it works, always.

You need to choose to release your procrastination: human beings have free will and they won’t act on anything else.

If you hope to “fix” another person’s procrastination, you may have to convince him to get the audio, or another in the series; he has to want to release his procrastination for his own sake.

Luckily this audio works on your procrastination only, the person who wants it to work.

Read more about the Procrastination to Action audio