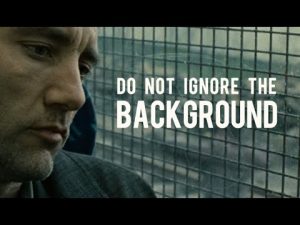 This article is dangerously personal…

Last night I watched a movie, Children of Men.

I remember seeing the trailer 10 years ago when it was a new movie. Then I never heard of it again until yesterday. That it is an accurate showing of where we are heading and where we already are.

I didn’t have anything else to go on, so I watched the movie almost till the last five-ten minutes not knowing what I was “supposed” to feel.

The reality it shows is horrid. Not supported with any emotions, any feelings whatsoever. So it made no sense to me. Why are these people killing each other?

But in the end the movie showed something it was worth watching for: men bowing to, in wonder, being uplifted by Life.


It seems that unless you can see that Life continues, that there is new life, you can’t and you won’t respect life in its glorious or inglorious form: another human.

But when you see that life will continue, in the movie the newborn little girl, people stop killing, for a moment.

It’s not a good movie. It has no emotionally justifiable character, other than the young mother, and maybe the gypsy woman. They are for life continuing on the planet. Saving life from evil.

And for a moment, the fighters stopping to bow to life.

It was still enough emotional nourishment to pay for the 90 minutes of pondering what I was supposed to feel.

On another note: in the movie people became infertile. At the beginning of the movie it had been 18 years since a new person was born.

It makes one wonder. Life doesn’t stop unless it is disrespected, disregarded, violated, and neglected.

So I was pondering what would make life not produce new life, or not be able to bear it to full term. Both happened in the beginning.

Surprisingly Life’s explanation with feelings is very valuable here… ultimately without it I would be only able to talk symptoms, not causes.

I don’t know how this fits here, but it came up… maybe because my Hungarian friend from University is on another call… and I have to feel her horrible “nonphysical pain”.

For years I had a major weakness. I could not hold it together, and be myself, when I was trapped in two calls… by call waiting. Or the phone rang while I was talking to someone.

What was going on on the feeling level?

I could not reconcile the needs of meeting others’ expectations and meeting my own expectations. They were in tension…

I am still having a problem with it, but thankfully it only comes up on calls, when one person wants to hog all my attention.

So, after this little interlude, let me return to what I was pondering: how come people were (are) disrespecting life?

Not surprisingly, the cause of this can be found on the needs to meet others’ expectations and your own.

Now, if you are like that, and you live in a community of like minded people, and you suppose everyone has it better than you, then you’ll spend a lot of time wanting to impress people around you. Fakery.

One mode of fakery I am going to concentrate here, but it’s not the only one. Food.

If you are very interested in meeting others’ expectations (that may even be only in your head!) you are going to do silly things. Like eat expensive exotic food, just to meet what you think others expect of you: posh, sophisticated, rich, or enlightened… in which case you’ll be a vegan, I think.

And eventually Life will give up on you… because your health will be hopeless.

And eventually humans won’t be fertile…

I just hung up skype with my only friend from Hungary.

I discovered that the reason we are friends is because she likes to have a lot of friends, and maintain relationships.

I don’t expect people to like me, or to enjoy spending time with me.

The marker feelings I have attached to my “I” are obviously mostly unpleasant, coming from my parents, people in authority, etc.

So I expect not to be liked, and when someone like this friend from Hungary says that she enjoys being friends with me, I cry.

My need to have a group has been thwarted all my life.

If those marker feeling work this way: make one live alone, in self-imposed exile to avoid the non-physical pain I experience when I think what others say about me…

And chances are that this is a distortion in reality… on one hand, and self-fulfilling prophecy on the other hand.

If you wonder why I am spending so much time with this topic: let me tell you.

Distinctions are a new way to look at life. With new distinctions you can see and understand and appreciate things that never made sense to you.

If you ever wanted to grow: this is the way to “use” distinctions: hang out with them until you see as much as you can. Cry your heart out, laugh your head off… do both.

Distinctions don’t do anything if you stop at understanding.

Distinctions are the key to being able to transform yourself form whatever you are to whatever would be a great way for you to be.

If you don’t do it: now you know why you have never changed anything… ever… or not for the better.

I know it is the New Year in a few hours.

People can be classified into three categories

Will you get out of the sad and miserable majority in the next year?