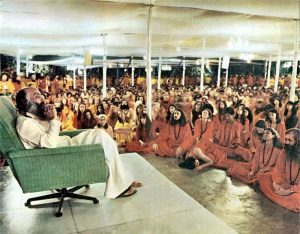 I just watched/listened to two Osho talks… And suddenly I realized what I have never seen: why Osho’s vibration is not higher. It dropped from 300 to 280… as more of reality gets revealed, everyone’s vibration gets lower. Seneca’s vibration today is 300, but when he was alive, it was around 800.

So Osho died 25 years ago, give or take, and his vibration, consequently dropped.

OK… so what’s wrong with Osho? After all it is so soothing, so wonderful to listen to him.

That is what’s wrong with Osho.

How does he get you so soothed?

He points at society, at politicians, at education as the reason why you are not happy, why you are afraid to look yourself in the mirror, etc.

Just like my Hungarian friend who was hoping to sell his book to Academia… don’t make me laugh.

When you point at causes outside of yourself at the cause of your misery, your ignorance, your weaknesses, your fear… then you just “absolved” yourself from being responsible and accountable for your own life. 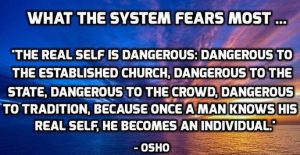 You have handed over all the power over your life to the “enemy”?

Here is what I am working on, because it is how things work in reality:

I am working with each and every person I work with to claim their power, individually.

Most won’t, I am aware of that. Just like in The Matrix that guy went back into the Matrix so he can eat fake stake…

But I won’t wait for the Matrix to change its tune… and when you, Osho, or I blame the “system”, the politicians, the rich people who are behind the scene of everything you say you don’t want, like a compulsive liar for a president, you are playing their game, and not Life’s game.

Your job, if you want to become a person, is to keep your thoughts, keep your activities strictly to yourself, and about yourself.

Underneath it you’ve been a snively little shit.

So, given that snively little shit is the starting point for you (it is, unless your TLB is around 50!) you better start with that… and not look for excuses in the outside world.

I call bull shit on that.

Who goes into meditation is the same who comes out of it.

Only increasing your TLB, reducing your ignorance, going for the things that look difficult, increasing your worth a damn factor, your deserving factor: your interactions on the Tree of Life.

Only those will result in a person different than who started those actions.

Isn’t it a lot more soothing to just sit and listen to Osho? Millions do! Millions of worthless snively little shit.

Any program that doesn’t ask you, and then doesn’t call you to account, to perform actions not easy and obvious for you, are programs that serve the status quo, the powers that be, the Tree of Knowledge.

Leaving you self-content, in the maya, living in a dream.

Vanilla Sky: I don’t like Tom Cruise, 2 but I liked Vanilla Sky. Not because I understood it. I still don’t. But I feel it.

The moment the character Tom Cruise played realizes that he lives in a dream and that reality is not going to change because of the dream, he throws himself off the tall building… at least that is what I remember happening.

You can live in an ugly reality, by the way. The moment you stop using hallucinogens to make it pretty. And all the ugliness can be transformed into just what’s so, when you stop resisting that what is ugly. About you, about your life.

And that is an excellent starting point to initiate growing from.

The moment you do life from that, you are on the way to be a really high vibration person… because the Tree of Life happens inside unresisted reality.

Ugly is a matter of comparison. Nothing ugly inside reality.

2 thoughts on “What’s wrong with Osho? Why is his vibration so low? Why is his teaching so pleasant?”