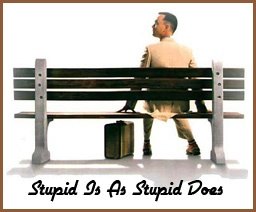 I have known that my turnaround happened when I declared that I was stupid, in 1996, and I embraced it. Accepted it. Came to terms with it.

But I had no idea until this morning how I got to that point. Where the idea came from.

I put a movie-clip into my article earlier this morning to illustrate how you can shed the prison the Tree of Knowledge put on you… a clip from the movie Forrest Gump (1994).

Then I downloaded the movie… read a few reviews… and it dawned on me:


Because it is nonsensical, it started to work its magic on me. What the heck does that mean?

The question was very important to me.

I was called stupid by my parents

…(nobody else, by the way) but it was working its toxic magic on me day in and day out.

I could only see stupid and smart… hard edged, unforgiving, dogmatic.

I even had another saying: “If you are stupid you should die”… I have no idea if I heard that said or I made it up myself… but you can see, stupid was something that was very important to me to deal with.

In the movie, it seemed, the low IQ Forrest didn’t understand it either, but it set him free from feeling boxed in as stupid… And he was able to live a full and happy life.

I could not say that about myself. My IQ was high, but I didn’t live a full and happy life… on the contrary… I hovered on the edge of having to die because I was stupid.

The months I spent pondering the weird saying… “stupid is as the stupid does” eventually allowed me to expand my cone of vision and start to look at the effects, the actions, the speaking, the attitude of people, instead of their IQ. Stupid is as stupid does.

There is some causality, but not much.

Someone can lack intellectual IQ, but be careful, caring, industrious, accommodating, funny, respectful… all virtues… and on many levels a lot more valuable than smarts.

I was “smart” but not caring, not kind, not respectful, not flexible, not forgiving, not patient, the many virtues that I could see would make life work a lot better than mine was.

But I found that my attention was always drawn, always pulled back trying to prove how smart I was…

And after two years of pondering, I decided to be like Forrest Gump: an idiot savant. Nothing to prove.

I’ve watched that movie many times. I cried every time. What got me always was his peacefulness. And that he listened to his feelings… felt like running… ran. Felt like eating… ate.

Declaring myself stupid got me that… and through that peacefulness I could do a lot of things the smart jerky me could not do.

Now, how is this useful for you?

Playing with “stupid is as stupid does” severs the marker feeling associated to the word stupid. The marker feeling is that strong non-physical pain you have when someone devalues your “I”.

Whether you consider yourself smart or stupid, it won’t matter. The goal is to allow yourself to just be. Neither smart, nor stupid, nor any goddamn thing… just be.

The biggest missing I see is this ability to just be… When you can just be, be the eye of the storm, then you can actually do the things that make life worth living, that currently you are not able to do because of the marker feelings.

Like do something hard, challenging, or something that requires your attention but not your “brilliance”…

Life is lived through doing the things we are currently not doing. Or if we are doing some of those things, we feel that they are either beneath us, or above us… not a perfect match, don’t belong to YOUR life.

So you resist. Subtly or out and out… but you are busy resisting, not doing: i.e. you are not living.

Whenever you resist anything, you just stopped life, you stopped living.

And no, let me answer your silent question: is that going to make you a lazy bum? No. Instead you are going to do fully what you are doing, instead of doing it because… because of some agenda.

When you do something because… you are not present to what you are doing. You are present of the pressure of what comes after the word “because”…

And that means: you are not living you life.

And most of you, most of the time, you are in some “because”… or some resistance.

You see, before you can learn and practice virtues, you need to clear your plate. Your plate is full of because and resistance. Not with things you do… no, they are not on your plate.

The shoulds, the have-to’s, and the shouldn’ts fill your plate.

Once you learn to just do what you do, you are making room for learning virtues, one at a time.

Seneca, my current hero, lived what he taught in his famous stoic philosophical writings, only 10%. That is not much: you say, and you are right.

But he was the only one at his time who did. And those 10% took him to a vibration of 300, in today’s measure… And given how much vibration goes through “inflation”, or devaluation… in his time it was equal to much more.

Find a guru today with that vibration… there are mighty few… so there you have it.

Even succeeding to master virtues 10%, or master 10% of the virtues will get you to a place where living is a lot smoother than where you are at now.

And yes, vibration is a lot about smoother…

Even if you give up growing, give up challenging yourself… because smoothness has nothing to do with circumstances, a job, the people in your life, criticism, etc.

Smoothness comes from your inner resilience and inner unperturbedness… 1 is that a word? lol

After all, life is like a box of chocolate. You never know what you are going to get…