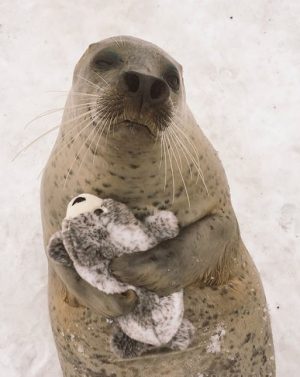 Seal Finds Toy Version Of Itself, Can’t Stop Hugging It

I have been looking at the pictures of this seal treating the plush version of itself with obvious feelings and every time I shake my head and say… “no, animals can’t love”.

But what if what we see on these pictures is what love is, and not what we have been calling love on the Tree of Knowledge? What if?

So what is love? What is the seal feeling, what am I feeling?


We, humans, have been calling love something that is, maybe, not love. 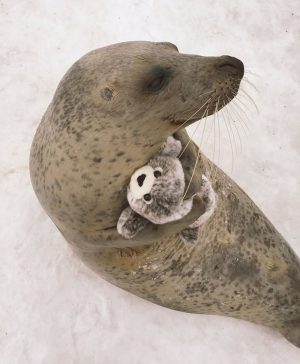 When I watch humans, their love is about them. It is wanting something. Eat it, possess it, hide it, reach it, change it, show it off…

The only thing that does not fit into that picture is wanting to feel that warmth that one feels when one wants the best for the other, maybe even in spite of themselves. Wanting nothing in return.

I have immense gratitude that the tiger looks at me and seems to listen to what I say with devotion. It awakens a gentleness in me that brings me to tears. A melting of sort.

It doesn’t order me around, it doesn’t want me to change, or shut up. Its passivity awakens the “mother” in me, the nurturing, my life giving, life supporting nature.

I go back to that every time I go to bed… the tiger resides in my bed. And until I am ready, the tiger waits patiently… no complaining, no demands.

It reflects back my love for it. Echo. It’s warming. Thawing. It makes me feel vulnerable.

When I look back at my involvement in “human” love, I see none of it.

I had one experience that was similar: a guy I went out with once… we ran into each other at a New Year’s party a year or two later. He was a sculptor. And he placed his hand on my head… the way you place your hand on a child, or a dog, or something you love. And I felt love. I felt MY love, I think, although for an empath to tell whose feelings they feel take work…

But the gentleness of his hand on my head was love for me. The parent to his own “creation”…

It must be in our genes to care for our offspring, and want it to be its best, nurtured, secure, and loved.

But I bet that is not the feeling people experienced from their parents. I didn’t. I love the tiger more than I loved my parents. I echoed back to them the indifference and occasional disgust I felt from them.

I tortured my rag doll, beat it, pushed out its eyes… I did not learn to love until decades later. Maybe not until I bought a tiny teddy bear… my cat took it from me and treated it like the seal treats the plush toy… So I bought the tiger, and slept with it on my heart.

That cat knew how to love. Why? Because when I picked it up at the animal shelter, it was just days old, and needed a lot of nurturing. And I did just that. And we built a bond… and he could pass it on to the plush toy.

I had two more cats later on, but they never learned how to love: they skipped the nurturing state, came to my life past that age.

OK, now, what can you do to thaw out your frozen ability to love? To have love be just that: nurturing? Asking nothing in return, not even that the other “reciprocates” our “love” for them.

Human love isn’t. You “love” the other exactly the same way as you “love” chicken wings… That is called appetite. It’s all about you. 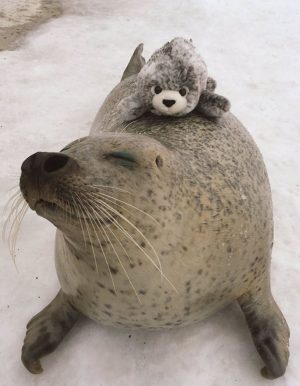 This seal at Mombetsu Land, an attraction in Japan’s Hokkaido district, got a plushie that looks like the ‘mini me’ version of the seal.

Clearly, the seal he couldn’t stop hugging it, riding it on the back, and squeezing the toy to its heart. We wonder if the seal thinks the toy is its baby.

This adorable animal at Mombetsu Land, an attraction park in Japan, got a special present from the zoo staff

A plushie that looks just like the ‘mini me’ version of the seal!

The seal couldn’t stop hugging it, riding it on the back, and squeezing the toy to its heart

I have been teaching clients and students to hug themselves. I do it almost every night. I hug the self that did all the things during the day, that has the sore spot on her shoulder, the one that doesn’t know anyone loves her.

I give it love. A few seconds, a few minutes. I observe as her face smooths out, she smiles, and she “purrs”… or whatever humans do when they are contented.

Sleep becomes blissful after that.

Here, I passed on to you one of my secrets. lol.

6 thoughts on “When the empath is stumped… or what is love? Can seals love?”