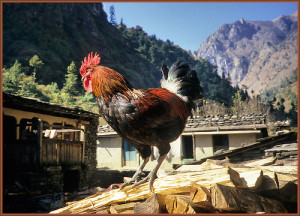 One of the distinctions is the question: where are you looking to get guidance.

As you can see, distinctions are not keen on answers, they are keen on you looking. They return you to the present where you are forced to look…

I just spent an hour with a client. In the beginning of the hour I acknowledged him for something he is really good at. His reaction surprised me, and it took me a long time to get the dynamic; he said: “ooh hoo, I am in trouble…”

To me it didn’t make sense, but after a long time reflecting, I recognized what was going on: if he is good, and someone recognizes it, that may mean that he will need to continue being good.

It is completely counter-intuitive to me, a producer, but, as most people are not producers, it was normal to him, and it may be normal to you.

It is the classic case of the dog and the rooster, that I have tried to tell… unfortunately this may not be a common “story” because I didn’t find a version of it on the Internet.

This is how it goes: the dawn comes, but the rooster is sleeping in the hen house. The dog wakes him up and asks him: aren’t you supposed to greet the day? Oh, that, says the rooster, and goes to the middle of the yard and says weakly with not much energy: Cock-A-Doodle-Doo 2

The dog says: It wasn’t bad, but you can do better! The rooster takes the bait and belts out a really strong Cock-A-Doodle-Doo. Wonderful, says the dog. But there is a good news and a bad news. The good news is that it was really good. The bad news is that you will now have to do it every day.

Meaning that he set his own standard, what he can do, and from that point on he needs to deliver his best.

Which, for a producer, is a daily and self-imposed method of causing ongoing and continuous growth, but it seems that the 99%-er resists having to do anything, including what they said they would want to do.

Avoid domination is the name of the resistance, and it is a fool proof way to cause you to underachieve, and never experience fulfillment, satisfaction, a life that is worth living.

Now, let me put in a little twist: me setting this guy’s mind at ease that I wasn’t going to expect anything of him… is a fool’s solution.

If you are producing less than what you can, if your life is full of resistance, if you always wiggle to get off the hook where happiness, joy, accomplishment, and LIFE can be yours, then relying on others to give you permission to just be won’t do much any good.

The distinction: where you are looking for guidance, also could be called “being self directed” is going to be invaluable to you.

We have all heard the sayings that champions compete against their own best… but very few actually do it. That is why there are so few champions. And it isn’t all that true for champions either.

When you are looking for who you are, for definition of yourself, from others, you are really screwed. Others can’t see you. They can only see themselves, or the opposite of themselves. Not you.

Your parents could not be bothered to look at you and appreciate you exactly the way you are and exactly the way you aren’t. By the way, that would be the definition of love… I haven’t met a parent, haven’t heard about a parent that, according to this definition, loved their kid… No. They measure you against some standard, they look whether you make them look good in the eyes of others, etc. So they never actually looked at you and only you, they looked at you from their selfish point of view.

They saw no problem in squashing you… they gave a rationalizations: they did it out of love. They lied. And you lie yourself, when you say anything like that.

So what can you do? You can look at yourself, moment to moment (when you remember) through the distinction and catch that you are listening for guidance outside of you.

God, teachers, books, lovers, parents, are all outside.

You won’t see anything for a while, but just know that YOU are there, somewhere, and if you look long enough, often enough, through the right distinction, you will find yourself and your own guidance.

And to make this easier, here is an activator I just made: “Be Self-Directed“.

2 thoughts on “Want to have a purpose in life, be fulfilled, satisfied, happy? This article is for you…”