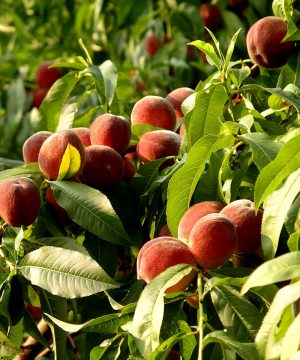 The Integrated Good Life & The Four Pillars Of Eudaimonia

Eudamonia: the fulfilled life. The satisfying life. It’s a how… It’s about how much life you have in your years. Fulfilling the potential that you are.

One of the hardest steps for students to complete in the 67 step coaching is the step about creating an integrated life.

Why? Because on the Tree of Knowledge of good and evil, there is no such a thing as integration. 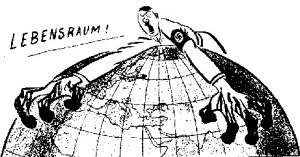 On the Tree of Knowledge you are a thing among things trying to carve out a life for yourself, ego battling with other egos for “Lebensraum”, Hitler’s world for occupying other people and their land so the German’s can live better and expand. (Lebensraum: the territory that a state or nation believes is needed for its natural development, especially associated with Nazi Germany.)

On the Tree of Life integration is a sensible way to live.

Where your one life smoothly goes from “room to room” in the palace of your life, and it is the same palace.

On the Tree of Life the only question is: what should be the basis of integration. The one-ness, the motif of life, that goes and repeats in every are of life.

It can be anything… really. But as usual, I organize my answers, my decisions, around usefulness.

Is it going to get me a better quality of life? If yes, then it’s useful. 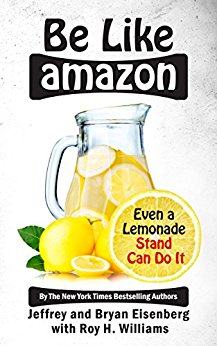 The best people, the best companies, integrate around principles.

The Twitchy little bastards, the marshmallow eaters, organize around short term gains, that are not sustainable.

For companies, you can learn about this in Roy Williams new book, Be like Amazon. I am reading it for the second time, and I am starting to see how it applies to my life. Some things need to break through some barriers of self-concept, this book is like that.

Although it is written for business owners, it is even more applicable to an individual, and it suddenly sheds light to the elusive concept of integration.

Let’s look at the orchestra. The organizing principle is, seemingly, the notes. But like anything, everyone has a different take on the notes, some likes it faster, some like it more emotional… and the result is not music, but cacophony.

The organizing principle is the conductor who brings his idea of the notes to life, through each musical instrument, through the members of the orchestra.

We have all been part of the disorganized orchestra full of egos. Actually that is what life looks like for most of us.

And the incidents of harmony, alignment, shared purpose interpreted the same way are very rare. I have had only one incident in my life to show me what it feels like. 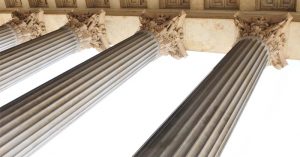 Even sex, even dancing, where it’s only two people, rarely has that magic in it.

At least I have never experienced it in sex or in dance.

Because integration doesn’t mean that one surrenders their ego to the other’s ego… which is how sex or dance goes in general.

Integration means: no ego, but agreed upon principles runs the show.

Now you get why it’s so rare, and why my students are having a hard time finding their integration, or even wish to have it.

I have been practicing integration for decades.

While participating in Landmark Education, the organizing principle was always an invented possibility.

A possibility is a possible way of being. Not some stuff to strive for, but a beingness you can gain access to any moment… much like a principle.

If you are willing to give priority and authority to the possibility you invent, it becomes an organizing principle that tells you what to do, how to be, how to respond, what to choose and what not to choose.

It’s magical. And because people’s unwillingness to relinquish their fixed “I”, it is rare. 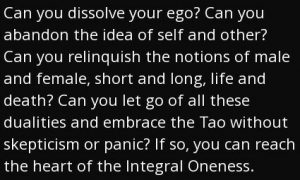 But, of course, all the raising your vibration magic is about relinquishing your fixed “I”…

If you considered yourself a company, you would see that all the department heads and all the workers have a different idea what to do and how to do it in order to get the most ego-benefit out of a project.

So your life is a battleground, and by the end of the day you are exhausted, and want to put your feet up, and escape it all.

But a company where each person surrenders their ego-benefit to the organizing principle can be a company of magic.

But how can you do it? 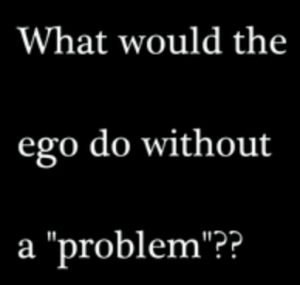 There needs to be a mental leap… The human brain is able to do it, if the human mind allows it…

See that by surrendering the immediate Twitchy Little Bastard short term goal of ego gratification, one can have the real benefit: a life that works, a life that has life in it, not struggle, results, ease, grace, and joy.

The issue is the mental leap: a cognitive function that you were never taught, and if you got stuck in kindergarten in your mental attitudes, you need to do a lot of growing up to be able to exercise.

I listened to yet another commencement speech, this one by David Foster Wallace.

The speaker is a famed author, who died by his own hand. But what he says: you want to hear. You want to heed.

Instead of most speakers, he gives just one organizing principle to the graduating students, so it is less satisfying but a lot more instructive than other speeches.

This organizing principle can be the magic bullet that helps you grow your mental age to adult… and with the mental age come capacities that will allow you to live a life of grace and ease.

The speaker, David Foster Wallace gave you, I think, what he most needed to learn and practice… Why I think that? Because at age 46 he hung himself. 6

That certain aspects of the person are on a higher level of personal evolution than others. That you never cut ties with the “mother”, or that everything is saying something and devaluing your sense of “I”.

When you live in mother-child, you never really had a real innate need or desire to grow up, because the field doesn’t allow it, doesn’t condone it, doesn’t foster it.

The adult capacities of responsibility=being cause and ownership could not open up and develop.[/note]

The significance of the field you live your life

Mother-child relationship for animals is healthy: the mother pushes the child out of the nest, even before it’s ready. You get ready by being thrown into deep water, just deep enough so you can find your feet or your wings.

Human mothers are, instead, possessive, and your life is about them, about their ego. So they don’t want to let you go. 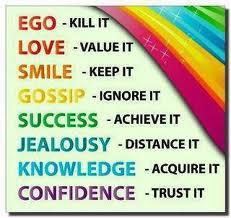 The only way to overcome this debilitating condition is to jump. And jump again.

By challenging yourself, and putting yourself into positions where you can sink and drown… or make peace with never becoming a person…

I am OK with either.

But once you make your decision that you won’t leave the comfortable nest, the mother-child field, stop grieving or dreaming about personhood… Stick with your “no”.