After I finished writing this article, I looked up the word “indigestion”… the correct word I should have used: incomplete digestion… although then not many people would open this post… lol. So I am leaving it the way it is, even though indigestion, literally, is a discomfort, around the stomach area.

Most people get fat because of indigestion or poor digestion.

When you have indigestion, the discomfort mimics hunger, and you eat more.

The stomach is the first organ where digestion begins. Proteins: meat, fish, eggs, cheeses need the stomach to have strong acid to break the bigger protein molecules to their components, amino acids.

Strong acid, 2-3 on the PH scale (7 is neutral). Most people’s stomach, after age 30, is less acidic, and they the protein has to hang out in the stomach long to be broken down.

Carbs, vegetables need an alkaline environment to start being broken down to digestible elements.

After age 30, a sandwich that has protein and bread, meat and potatoes, stews are quite deadly, because the elements of the meal require an different PH environment to be broken down.

This is especially true if the meal exceeds the two fist rule. 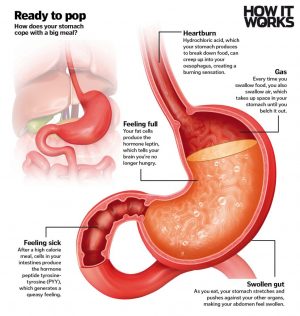 A normal size stomach, internally, is three fists large. It needs to be able to move the stomach contents around and mix it with digestive juices to do its work.

This means that the largest meal you are allowed to eat is not larger than two fists size, including the fluids you consume with it.

A normal diner meal is three-four times bigger than that.

Just enter a diner and count how many obese people sit there… and just please know, if you eat there regularly, you’ll be like them. No kidding.

Why would cancer be related to indigestion and overeating?

If the body’s immune system and lymph (draining) system is overloaded by the task of getting rid of the toxic undigested sludge the stomach dumps into the intestines, it has little energy left to police the body for the stray cancer cells that are born every minute of every day, in even the healthiest bodies.

And those stray cancer cells, once colonized, are impossible to get rid of… A healthy immune system that is available to do the work, can prevent the colonies to become bigger, but cannot eliminate them.

Every body has cancer, big or small, but not everybody gets full blown cancer.

The faster you stop overloading your immune system with clean-up jobs after meals, the faster you prevent your cancerous cells from becoming life-threatening.

Yesterday I had a conversation with my next door neighbor who is battling stage 4 cancer, for the past six years.

By the time it was diagnosed, it was stage 4.

She told me that the doctors told her that obesity is the number one reason.

So I am sitting here looking where is the money in that statement. Because it is obvious to me that obesity is a symptom, not a cause.

Eliminating obesity, as most people are trying to do… lose weight, is still dealing with the symptom.

And if it looks to you that you can get rid of your disease risk by crash-dieting to lose the extra weight, I have a Montana oceanfront property to sell you.

If you never lost an ounce of weight, but started to eat for digestion instead of what got you fat, taste, indigestion, hunger, comfort, greed… you’ll both lose weight and prevent more cancer or heart disease to form in you.

If the death merchants paid my salary, I’d probably become corrupt too.

This is why I don’t participate in commission based programs, to remove myself from the temptation to alter the truth.

If people started to

I know what I am suggesting is not easy. 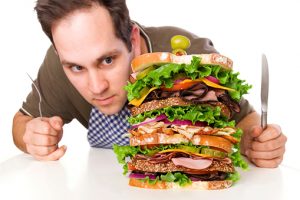 On the days when I do my shopping, I overeat. But I do that once every two weeks… so the price, hopefully, won’t be cancer, or crippling pain, or continuous hunger.

Now, let me write a little about my skinny health clients who claim they only eat what is on their list and their health number still doesn’t go above 10%. Two women…

When you eat the foods I have muscle tested that serve your body, when you eat in the style I muscle tested for you: eat for taste, for variety, or like me, one food at a time, your health number will go up…

So if it doesn’t… then you are lying.

“Once you eliminate the impossible, whatever remains, no matter how improbable, must be the truth.”

Or… maybe there is a possibility that we, I, haven’t seen and haven’t tested for.