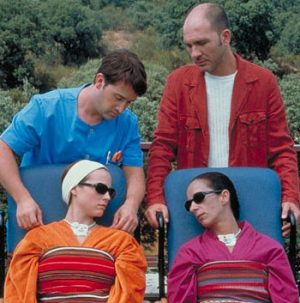 Your core belief is what keeps you sick, fat, miserable, and poor…

…but it is not easy to see your exact belief… A belief is a sentence… words… And without the exact sentence, you can’t release it

Another great way to suspect that there is a core belief is the following method? 1

Let’s suppose that you love movies. You watch a movie. You are spellbound. You are somehow kept in awe, but when someone asks what about that movie that does that magical thing to you, you have no answer.

I have a few foreign movies that did that to me (American movies are largely unsuited for this purpose: they treat the viewer as imbecile)

One of those movies, a Spanish movie, called “Talk to her”

I’ve been mesmerized. I have been spellbound. I have refused to talk about it.

I am breaking my silence because I saw something today that has everything to do with MY core belief:

In the movie the caretaker of a comatose patient (unconscious but alive) impregnates the patient.

He gets convicted and imprisoned.

Now the fact that society violates it left and right, does not eliminate the law.

As you can see, with my warped belief system violating this comatose woman’s right for choice was not wrong… and my being spell-bound, recalling the movie for the past 5-6 weeks every single day was a good indication that there was something in the movie that I could not get from the warped world I was living in.

I shifted that belief 3 days ago, and today I could see that the caretaker violated the patient’s right for choice, and no mitigating circumstance does not make him right. The fact that the woman can now live a full life isn’t an excuse for the caretaker.

So, here is what to do: if you can, or if you have the “talent” to be spellbound by a movie: ask people or think hard about the part that is amazing and you have no “access” to completely getting… it hides your core belief and that’s what’s blocking your understanding.

Your sense of right is off… and you just found your core belief.