As I said in a previous article, movies that you have an unusual affinity with are a great indication of some hidden belief that has an effect on your life.

This past year I have been asking and getting guidance. The guidance happens through movies, books, mostly.

I have Netflix. I don’t know what’s fashionable, what’s hip, and that helps. Ego and the collective ego isn’t driving my actions.

This is how this movie “Gloomy Sunday” showed up on my screen. Horrible title, if you ask me! And it’s a Hungarian movie, dubbed in German, with English subtitles. It was a Gloomy Sunday, and I decided to watch it.

I had prejudice on top of prejudice, but the Gloomy Sunday was there, and it was clear it was there for me.

The Gloomy Sunday plays in Budapest

4 characters, a Jewish restaurant owner, Andras, his mistress and manager of the restaurant, Ilona, the restaurant’s piano player, and a German guest.

The movie starts nowadays, with the arrival of a birthday party from Germany. The birthday boy, a German, used to be a regular at this restaurant, so they prepare him his favorite dish.

The famous dish arrives, his plate is decorated with a big 80; it’s his 80th birthday.

He starts eating, frequently glancing at the framed photograph of Ilona. After a few bites he suddenly grabs his heart, and he keals over and dies on the scene.

The rest of the Gloomy Sunday tells the story what happened 50-60 years earlier. 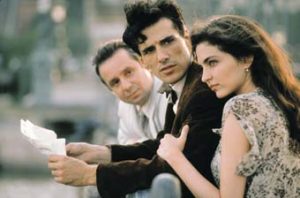 The three Hungarians had a kind of 3-some, Ilona is very beautiful, and both the owner and the piano player are her lovers. The German guest also falls in love with her, and when she says no, he heads to the Danube to kill himself.

The restaurant owner pulls him out of the Danube, and saves his life.

Five years later the German comes back, now he is an officer in Hitler’s army, and he still loves the restaurant, but the times have changed.

He is in charge with the Jewish transports to the concentration camps, but promises the restaurant owner that he is safe, because he had saved his life.

The piano player writes a song to Ilona, that becomes famous worldwide as the suicide song. The song is called “Gloomy Sunday” and it is sad, it sings about betrayal, and loneliness, and dying. He buys a poison to kill himself, but Andras takes it away from him. He still kills himself.

One day the Nazis come and take Andras, so Ilona runs to the German to trade her favors for Andras’ life.

He rudely takes her, as good as rape her, but he won’t move a finger for Andras, so Andras is taken and will perish.

She is pregnant. She is running the restaurant Andras left for her. She never changed the name. Her son is the maitre d’.

In the last scene the dead German is taken by the ambulance, the birthday party leaves. The maitre d’ goes back to the kitchen where an older woman washes the dishes and washes this little medicine bottle in the same water.

The maitre d’ opens a bottle of champagne and they drink.

That’s the Gloomy Sunday; It’s subtle; If you blinked you missed it.

I saw this movie about 6 weeks, maybe two months ago. I have been going back to the last scene, with a certain longing and excitement. Sometimes 3-4 times a day.

I am attracted to the fact that she delivered justice. That she had the courage to do so. Illegal? I know. I am seeing something for me.

My mother horribly abused me. She hated me. She broke me down any way she could.

I moved two countries to get away from her. She came to visit in 1992: I was deadly ill for 10 years after that.

In 1987, in a Landmark Education program, I had an opportunity to express my anger and revenge my hurts… I could not do it.

Why? Because killing is wrong. Because my anger kills, and I am not a murderer.

Wow, an innocent movie, the key hidden in the last few frames, and liberation.

It was my mother’s birthday today. I killed the hidden belief, not her. Thank you Gloomy Sunday!

By the way, if you are interested why the song has contributed to so many suicides, watch this youtube video: quite interesting about the music itself, not the words… youtube video to Gloomy Sunday on the science channel