People are looking how to make this ‘staying at home’ thing less restraining and more enjoyable.

I got this suggestion in an email yesterday:

In my last email, I admonished you to hope for the best and prepare for the worst. So, if you are wondering how to conquer fear, then here’s what I did: I offered to help other people. Simple!

There are always people that need help (for different things), especially in these difficult times, and… Helping someone else is incredibly empowering and liberating.

It could be as simple as offering to help an elderly neighbour with her shopping or helping a relation leverage digital tools for their business. By the way, I’m doing both. 😉 So, offer to help someone else (for FREE) and before you know it – you would have stepped away from a place of fear.

And here is another story:

One night, the Shah dressed up as a peasant to enjoy the evening air undisturbed by his rank, and to wander through the streets of his empire unnoticed. He walked through town and reached the poor section of town. The street was quiet, but suddenly he heard singing from a little cottage. As he peaked through the window he saw a man sitting at a table.

He was amazed that such a poor man would be in such good spirits. He knocked on the door and asked if he would be welcome to join the man as a guest. They ate and drank together. After the meal the Shah asked the man how he earned his living.

“I am a poor Jew, I fix shoes in the street, and with what I earn I sustain myself for that day.” answered the man.

“But what will be your fate if something happens to you or you get too old to work?”” asked the Shah.

“Oh I do not worry about that,” the man said happily. “I know God will provide.”

The Shah decided to test the faith of the poor man. The next day he issued a decree that forbade anyone to fix shoes in the street. The Jew was stunned when he found out this new law, but he contemplated looking inward and said, “God, I am certain that you will provide.”

He looked around himself and saw a man with water jugs on his shoulders, and he saw that he can become a water carrier. So he hauled water from the town well, and sold enough to buy food for a day.

That evening, curious how the poor man made out, the Shah returned to the man’s house.

“How are you?” he asked upon entering. I came to see how you survived the new law.”

“God provided for me today,” the Jew answered happily. “One door closed, but God opened another. I am now a water carrier.”

The following day the Shah issued a new decree that carrying water for pay was not allowed. So the Jew spoke to God, and when he looked about him, he saw men going into the woods to cut trees for firewood. Thus he went with them and made enough for food for the day.

That night the Shah came again to check on the poor Jew. To test his faith more, the following day he ordered all wood cutters to the palace. When they arrived, with our poor Jew among them, he issued guard garb for them and a sword. They would be paid, but not until the end of the month. Our man was now really puzzled, for he had no food for one day, and definitely no way to buy food for the whole month. But though he didn’t know what to do, he assured God that he was certain that he will provide.

On his way home from the palace he looked at his sword and had this idea. He fabricated a sword out of wood and sold the sword. The price he got was enough to buy food for the month. The Shah, visiting again that night, was very surprised when he saw the Jew singing and eating.

When he found out what happened, he gasped. “What will you do if you get found out?”

“We’ll cross that bridge when we get there… I don’t worry.” the Jew replied, “God will not abandon me.”

The following day, in the town square, there was to be an execution scheduled, execution of a man for stealing fruit from the Shah’s orchards. The Shah ordered all his guards, including our poor Jew, to go to the execution. There was a huge crowd to see the execution.

At the square, the Shah picked the Jew to have the honor to cut off the man’s head.

“Please, Don’t ask me to kill,” the Jew pleaded. “I have never even killed a fly.”

“Obey or join the condemned!” cried the Shah.

The Jew closed his eyes in prayer for a few minutes and then called out loud:

“My God, you know that I have never killed in my life. Please, God, let my sword be so very sharp as to kill him in a single blow, if this man is guilty. But let my sword turn to wood, as a sign of his innocence, if he is not guilty.”

With thousands of eyes watching his every move, he pulled out his sword of its sheath, and held it up high. The crowd gasped, then applauded and celebrated when they saw the wooden sword. They saw that a miracle had taken place.

The Shah was filled with delight. He confessed the Jew that he was the visitor of those previous nights, and invited the poor Jew to come and live in the palace as his trusted advisor.

“I see that you are a man of wisdom and unwavering faith,” he said. “I have much to learn form you.”

The Jew went to live in the palace with the Shah.

So, why did I tell you this story? Because in this story the Jew lived like no other. He was not consumed by the worries of where the next “buck” will come from, what will happen next day, next month, if recession comes, if he gets ill, etc. He replaced all that with trust in the Creator (and himself) and thus was available for the small simple joys that pass others unnoticed, as their minds focus on their future security and happiness.

Our Jew lived in unwavering faith and gratitude, thinking only of meeting his needs day by day. He lived in a state of love rather than fear; love of existence, love of the moment, love of life. He fulfilled on life’s purpose: Live more abundantly.

He consciously set aside the habit of worry and planning. Instead he was present, both to listen to the counsel of God, or his inner wisdom, and this allowed him to make wise choices, in the moment, and be ready to make another wise choice the moment this decision proves wrong, or a door closes on him. And he did this with deep gratitude acceptance and joy?

If you notice, it wasn’t that he was waiting for something, like money, or food to materialize from thin air. No, he was getting the counsel, the guidance, and then he willingly acted on it. The Jew in our story was actively involved in his own life.

It’s been a longstanding question how God communicates to us, how God provides. 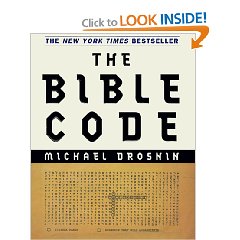 The book points to choice. Choice. Which means, every moment, you have choice, and you choose. Our man could have chosen to throw up his arm, and plead victim, give up, be a martyr. I know more people like that than I care to count.

But he chose listening to the whisper of possibility, and all the tragedies were averted, just like in the Bible Code.

Yesterday, while shopping for oatmeal in my local coop, one of the clerks looked cloudier than usual.

“Good.” she said, but with faked cheerfulness, that belied that she wasn’t that well.

“Oh, it’s the holidays…” she said. It turned out that she had no money, no food in the house, and the next paycheck wasn’t going to be till three days later.

“Why don’t you ask for an advance… I am sure twenty bucks would tie you through?” I said.

“Yes, but they would never do that!” she exclaimed.

“OK, I’ll give you 10, and you ask for the other ten…” I said and reached for my billfold. It looked that I had five singles, so she said

“Oh, you don’t have it…” but behind the singles there was a twenty dollar bill. Rather than giving up on her, I handed that over to her. Later I saw her with a bag of food in her arms, heading home to feed her children.

Nice, you could say. But I want you to pay attention to something else: was she like our poor Jew? No. She wasn’t. Will I, or someone else be there to bail her out next time? Not a chance.

But something did happen. It was my listening to the whisperings of God. And therefore all the joy, all the light, all the abundance is coming to me… she just survived for a few days.

2 thoughts on “How to Live More Abundantly… stories”