Be Better at Life by Thinking of Yourself Less

The power of self-transcendence. In a paradoxical twist, research suggests that the less we think about ourselves, the better we become. Self-transcendence not only allows us to overcome our greatest fears and break through our limits, but it also improves our performance in less heroic, everyday activities.

The measure inside the Starting Point Measurements, the measure that asks to what percent you think of yourself is confusing to most people.

They think that the higher the number is the more selfish they are. Selfish… bad.

They think that they selfishly think of themselves instead of others.

But if you think of others: your number will still be high…

…but you would have a low number if instead of thinking of yourself, you would think something worth thinking.

YOU are not worth thinking about.

No thinking about yourself, others, events is real thinking.

“That, precisely, is the deadliness of second-handers. They have no concern for facts, ideas, work. They’re concerned only with people. They don’t ask: ‘Is this true?’ They ask: ‘Is this what others think is true?’ Not to judge, but to repeat. Not to do, but to give the impression of doing. Not creation, but show. Not ability, but friendship. Not merit, but pull. What would happen to the world without those who do, think, work, produce? Those are the egotists. You don’t think through another’s brain and you don’t work through another’s hands. When you suspend your faculty of independent judgment, you suspend consciousness. To stop consciousness is to stop life.”

You could think and observe your thinking… using tools of observation, distinguishing, choosing, and that would be worth thinking.

Or you could think and ponder ideas, and that would be worth thinking.

You could think and ponder how to do something, how to solve problems, and that would be worth thinking.

But instead, you think about yourself… mundane, repeating thoughts that make absolutely no difference, that don’t help you to carve out a life for yourself that is worth living.

You could be reading and observing yourself seeing what virtues light you up. What disgusts you, what turns you off. What ideals you may have. What standards you may have and where they are coming from.

You could learn to think and think how to perfect that.

But no, you are thinking about yourself.

I think about myself or others 7% of the time.

The number represents your level of humility, or really the lack of it, your level of being willing to learn something new, to be measured, to be challenged.

I could have said: to what percentage of the time you are in your head/in your mind?

What I call mind is the treading water type of thoughts… having thoughts instead of thinking them.

Thinking about is not thinking, or not really. Neither when you think about yourself, or another… of even when you repeat the thoughts you have already had about your life… your bad luck, your body, your health, or not being able to sleep at night.

Having thoughts is not productive, and interferes with your ability to be a producer, to learn, to do anything worth doing.

Thinking, real thinking, is a lot like working out. Unless you do it with some rigor, you are neither strengthening yourself, nor producing anything with it.

I watch people in my exercise class: they are NOT really working out… their movements remind me more of “thinking about”, than thinking.

Most people who use the public staircase I climb every day, on the other hand, are seriously working out. Why? Because it is hard! If they brought the same discipline to life, they would amount to something. Most don’t.

But life is not as simple as climbing a staircase… In life you need to invent the staircase or its equivalent.

Doing the work in my coaching program is already too demanding for people.

One of the requirements is that you filter out and tell me what was the principle of the step, of the audio you are at…

The capacity one must develop is the capacity of choosing, separating the relevant from the irrelevant, principle from examples, the capacity of forming answers, based on your limited knowledge… But, your knowledge cannot grow unless you make decisions from it. Even if you make bad decisions, you at least used your faculty.

And if you stop at being a second-hand person, repeating other people’s truth, then you’ll never develop a self, you’ll never become a person, and you’ll never have any use for thinking: you’ll remain someone who needs to be given everything, taught everything, so you are barely higher than a zombie, and your job can be replaced by a robot.

When you listen to the step (the audio) and all you do is compare what you have with what is being said: you are thinking about yourself. You are not learning, you are not becoming more deserving.

The way to deserve what you want is to become a thinker who isn’t spending most of their time thinking about themselves.

I have learned an awful lot in the past 19 months, since i started coaching through the 67 steps.

One of the most important learnings was: unless someone is up to something that is way bigger than they can do easily, they will not learn anything.

But unless you are a thinker, even to be up to something is outside of your realm: at the maximum you want to have more, but definitely NOT do more than you now have.

In light of these numbers, you should get a new appreciation why most programs produce only about 1% of the participants to achieve anything.

The rest have nothing to work with.

Now, can you change? The blanket answer is no. The specific answer is: some of you.

I remember several times in my life, but especially after my brain damage, I wasn’t up to anything… I was and I wasn’t.

I knew that unless I regained my brain to do work with, I was really useless to me.

So I put effort in that. I didn’t try to do work with what I had… a damaged brain. I read, experimented, learned new tricks. I worked out. I learned energy transmission. I learned energy remedies, specifically Bach’s. I learned Kabbalah. I tested every modality i could put my hands on. I worked 16-18 hours a day on that…

Luckily my business that i already had when I got the brain damage was making some money, so I wasn’t quite destitute.

After the shock and seizure, I felt that the brain was restored to its previous glory, maybe even more… even though many memories never came back, even though I was more dyslexic than before, and the ability to know, with my eyes closed, whether I am lying or standing never came back.

But with the brain’s functions restored, I regained my ambition, my drive, my personality as a problem solver.

Why am I sharing this? Because everyone can change, you just need to put yourself in a position where you have to, or you fall.

You have stopped decades ago. 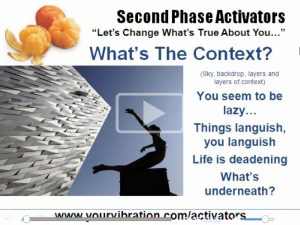 PS: The Second Phase activators course deals with and dislodges every single way you are your worst enemy.

Check it out. It may be the way for you to start…