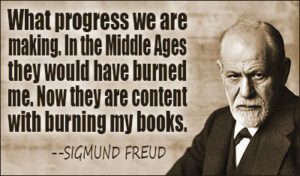 I wrote this article in 2017. It has some truth, but not all that much… I am fat again, and the weight, this time, doesn’t want to move. I don’t walk… so take it with a grain of salt… Please.

I went grocery shopping today on my own. I was carrying some 20 lbs of groceries up the steps to get home.

This was the first time in maybe 6-7 years. I don’t drive. So I walked and took the bus and walked some more. 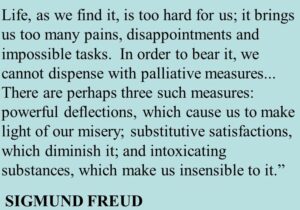 So when I first had this brought to my attention, in one of the steps of the 67 steps, I set out to make life and myself comfortable with nob being comfortable… and I started to devise new and newer ways to toughen up.

I keep the house at a steady 47 degrees. I walk. I now walk to get my grocery. I walked this week to get a haircut. I refrain from palliative remedies.

It is a great idea to read Freud’s ‘Civilization and its discontents’ to see what you, humans do to deal with the fact that life is hard. 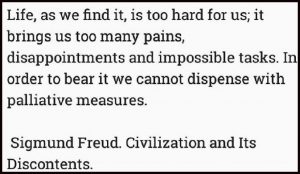 He says: Life, as we find it, is too hard for us; it brings us too many pains, disappointments and impossible tasks. In order to bear it we cannot dispense with palliative measures

One benefit is developing, opening up new spiritual capacities. The ones that will, eventually, lift you to the next evolutionary stage: human being. 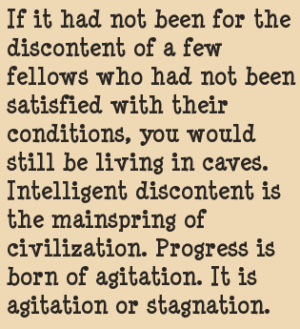 When you start directing and controlling your epigenetic shifts where you actually cause your genetics change, its exhilarating. And change you to in ways you have always hoped you would change.

I ran into Leo, my musician friend. I explained to him that carrying those 20 lbs of groceries illustrated to me what it was like to climb the steps a year ago, when I was about 20 lbs heavier. In 18 months I shed 40 lbs.

I said ‘no it isn’t…’ He wanted to know how, and I told him that is what I get paid the big bucks for. He laughed, but it got me thinking.

There is a secret that is worth a lot of money:

As long as you eat food that isn’t compatible with your body and wants more of itself… and as long as you eat in a way that isn’t working for your body, you are going to suffer from deprivation… And although that is not work, not in the strict sense of the word, losing weight while you are dealing with a sense of deprivation, hunger, cravings is hard.

The two components of a successful and easy eating regimen, 1. what you eat, and 2. how you eat are equally important. 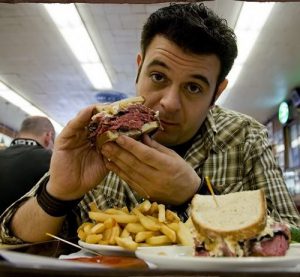 I haven’t written about the eating styles lately, even though, I see that eating according to your eating style is about 50% of success.

I am lucky, I get instant heartburn from not adhering to my particular eating style. So I get a kick in the stomach as a feedback. 4

So what is an eating style?

The distinction comes from the Human Design people, and some of it is b.s. but some of it has been tested and has proven very accurate.

Depending on your mutt factor, your eating style is closer or further from how our ancestors ate about 20-30 thousand years ago.

I am closer to the ancestors in my mutt factor, and my eating style is the closest to how they ate.

When I work with people, I muscle test their eating style… instead of muscle testing their mutt factor.

Factor 1: Some people need to smell their food and that starts the appetite… Appetite is the body’s message that it is able to receive and digest the food you consider. I call this type ‘cat’.

Some people need to taste their food to start the digestive juices working.

Hunger is not the same as appetite. Hunger is not necessary for appetite, in fact I haven’t been hungry for months now. 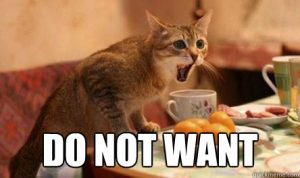 Salivation is an indicator that you are ready to eat.

Factor 2: Many people won’t get well if they cook and eat the way their mom prepared the big meals.

I, and many of my clients/students need to eat one food-thing per meal. I consider fat, salt, water, not a food-thing in this regard. I might be wrong. Too early to know.

I can eat fried eggs, but not a cheese omelet. Not even goat cheese omelet, even though goat cheese is on my allowed food list. And so are eggs. My type is called separator. Or a newer word: Alternator.

Some people are allowed to eat more than one thing per meal, if they don’t eat them in the same mouthful. The type is called Consecutive eating style.

I call the Consecutive eaters lucky… They are usually younger, as young as children.

And then some people are allowed to eat ‘normal’, to eat proper meals.

It’s quite a challenge for me to find out what eating style will work for people… Often I need to experiment. Often the style changes… like everything. 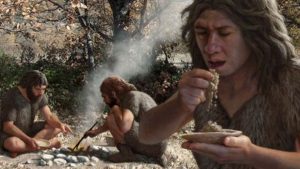 One thing is certain: if you eat only the foods in the combination that the style allows, you’ll have an easy time to be well, have lots of energy, sleep well, and never be hungry or crave foods that are not on your list.

Our bodies haven’t changed much in the past 30,000 years… and the further away you go from how we used to eat, the less health you’ll have.

OK… a little shift in topic:

As you know I have been studying Dr. Joel Wallach for 25 years.

Whenever he talks about the things he first hand experienced, he is right on… or close enough.

But whenever he falls victim to the certainty bias, where causation and correlation are confused, he is wrong.

It is very difficult to see what causes what in health. Testing is near impossible, and money concerns color the ‘scientific’ data. 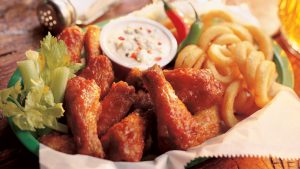 Dr Wallach says that the reason people in the Southern states die earlier is because of the fried food they eat.

So today when I was frying my catfish (yumm!) I asked Source, and the result I got is that that is bull… 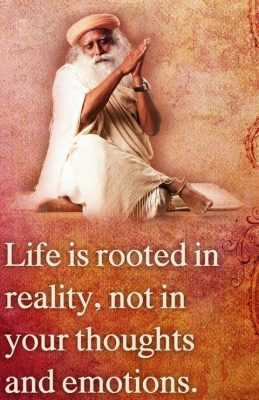 Vegetable oils block most essential nutrients from being absorbed. That is the likely cause of the lower life expectancy of anyone who uses vegetable oils, not the frying.

In my family my mother switched to vegetable oils in the 1950’s… I think, and with that she effectively killed my father, killed herself, and is killing her two sons.

I don’t use vegetable oils, and haven’t since I listened to Dr. Wallach’s expose Dead Doctors Don’t Die. 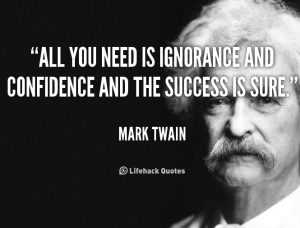 There are other likely reasons for early death… Milk and milk products.

The A1 protein that causes plaque, diabetes, and whatever else that’s horrible… like addiction to morphine.

I was hooked on milk for most of my life, even though I felt it was really bad for me.

More than half of the 18 months were spent trying to kick the milk habit. It is an addiction that is really hard to break.

And here is an aside: 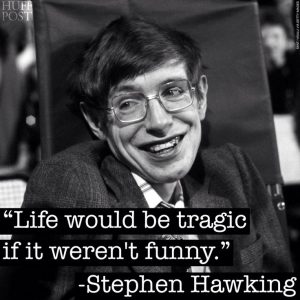 The French Paradox is b.s.

The French is thinner, and has less heart trouble deaths.

They eat tons of cheese and butter. Yum.

The difference is the breed of cow that gives the milk.

Dieters in France are getting fat… they replaced butter with oils… We, Americans, dumb down the world. 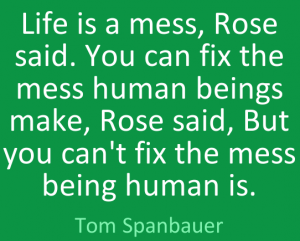 But I did it, and my weight is still going down. I now weigh what I weighed 30 years ago.

Even though I am only 90% adherent to my preferred style of eating.

Was it hard? It has been, actually both interesting, and uplifting. To me.