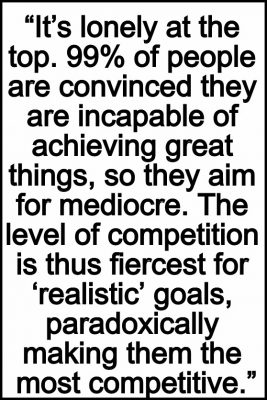 “It’s lonely at the top. 99% of people are convinced they are incapable of achieving great things, so they aim for mediocre. The level of competition is thus fiercest for ‘realistic’ goals, paradoxically making them the most competitive.”

Most people will never be truly successful.

The pull towards mediocrity is too strong. As David Schwartz once penned, “All around you is an environment that is trying to pull you down to Second-Class Street.”

Most people will never escape the pull.

Much of the thinking around us is small-minded. Most people are overly concerned with “beating the other guy,” usually through manipulation and politics. As a result, they’re left fighting for scraps with the other 99%.

It doesn’t have to be this way.

A life of your deepest dreams –100% financial independence, being your own boss, traveling the world with your family, whatever — is available, if you know where to start.

But most people will never turn away from the safety and security of the crowd to realize this.

“All of us, more than we recognize, are products of the thinking around us. And much of this thinking is small.” -David Schwartz

Most People Are Not Willing to Fail

“We can be truly successful only at things we are willing to fail at.” -Mark Manson

Most people hate failure. They run from it.

In their eyes, if they suck at something, it means they suck. Since their self-worth is tied directly to their performance, any failure is proof they aren’t good enough.

But this is exactly why they’ll stay in mediocrity. If they aren’t willing to fail, they aren’t able to learn from their mistakes. If they never learn, they’ll never grow and develop into something more.

“Would you like me to give you a formula for success? It’s quite simple, really: Double your rate of failure. You are thinking of failure as the enemy of success. But it isn’t at all. You can be discouraged by failure or you can learn from it, so go ahead and make mistakes. Make all you can. Because remember that’s where you will find success.”

If you’re not willing to fail, you guarantee you’ll stay average-at-best.

If you want to grow into an extraordinary version of yourself, you must be willing to fail –a lot.

Failure brings humility. It develops your character. It helps you laugh at your mistakes and not take things so seriously. Like a plant placed from the shade into sunlight, your growth rate will accelerate 10x.

When I first started blogging, I was terrified of one thing in particular — negative feedback. I still remember to this day a comment from an early article that read, “This is the worst article I’ve ever read.” I was broken up about it for months.

After that, I made all my articles as vanilla and non-controversial as possible. Before I hit “publish,” I would ask myself: “No one could criticize this, right??”

I was terrified of failure and rejection. As a result, my writing stayed mediocre and average for years until I finally started to embrace the possibility of failure.

If you embrace the possibility of failure, you open yourself up to enormous success you’ve never seen before.

“Every skill you acquire doubles your odds of success.” -Scott Adams

Most people would choose entertainment and distraction instead of learning and growing.

It’s not surprising. Learning is hard. Going to counseling, becoming a student of your craft, and constantly failing aren’t fun.

In the words of Hal Elrod:

“Repetition can be boring or tedious, which is why so few people ever master anything.”

This is great news for the rest of us, though.

Uber-successful entrepreneur Darren Hardy once remarked that he’s always glad when something is difficult, because that means most people won’t ever do it. The competition will always be low.

Prioritizing learning and self-education may be new for you. But know this:

Ironically, the fiercest competition is for the second-class prizes.

Once you prioritize learning, you become aware of the 1% of opportunities that are truly life-changing. More importantly — these opportunities have incredibly less competition!

Most people will continue fighting for scraps with the “mediocre majority.” That’s a game you don’t want to win.

Instead, quit the game entirely. Leave the crowd. Choose learning and self-education instead of entertainment and distraction.

Winners Act Like Winners Before They Become a Winner

Deep down, most people don’t think they have what it takes to be extraordinary.

It’s a self-fulfilling prophecy, of course — if you don’t believe you can, you surely won’t!

I blogged for 4 years and never got more than 200 subscribers. Looking back, I see now that I never really believed I could produce truly great writing.

I began believing in myself. I started acting like a winner before I found any success.

I bought a $500 writing course. I started waking up at 6 A.M. every day to write. I’ve spent hundreds of dollars on personal development books.

I treat myself like someone who knows they’re one of the best writers on the Internet. Soon, I will be.

“No one is ready for a thing until he believes he can acquire it.” -Napoleon Hill

I’ve found that once you tell your mind what to do, it will make it happen.

What’s crazy is I actually believe this can happen. As a result, my mind is always subconsciously finding solutions to make this happen.

Most people will never experience the surge of excitement after beginning to truly believe enormous success is possible.

Winners act like winners before they become winners. They believe they can succeed, and their mind starts working on how to get there.

“If you want to live an exceptional and extraordinary life, you have to give up many of the things that are part of a normal one.” -Srinivas Rao

You Seek Money and Titles, Not Experience and Transformation

“People are unhappy in large part because they are confused about what is valuable.” -William Irvine

Back when I was 23, and all I had was a little blog with <50 views a day, I joined an entrepreneur networking group.

These guys were intimidating. They wore suits and laughed at weird jokes and liked going to bars where a beer cost $11. They called themselves “Founders” and “CEO’s” and “Investors.”

I quit going after a few weeks.

There were many great guys and girls in that group who were kind and passionate. But there were also many members who just liked talking about their title.

Titles don’t mean much anymore. Anyone can be an “expert” or a “CEO” of anything. If titles and money are what you chase, I guarantee you’ll reach the end of that road feeling empty and sad.

The most important goals you should have should be experiential learning and personal transformation.

If you’re always chasing success, it will constantly elude you. In the words of Victor Frankl, “For success, like happiness, cannot be pursued; it must ensue.”

But if you always prioritize incredible personal transformation and paradigm-shifting experiences, success will gravitate towards you as if you were a magnet.

I just finished reading Memoirs of a Geisha. It’s an incredibly sad story of a girl sold into slavery of pleasing men.

The saddest part is that the young geisha doesn’t even realize she’s spending her whole life chasing the wrong thing: trying to make a man love her. She believed if she could perform well enough, the affections of this man would finally give her the healing and fulfillment she always wanted.

These won’t give you what you want.

Forget about titles and impressing others. Focus on becoming a person you are incredibly proud to be.

“Your level of success will rarely exceed your level of personal development, because success is something you attract by the person you become.” -Hal Elrod

You Spend More Time Being Jealous Than Working on Succeeding

“The time you spend being jealous of others’ success is time they spent working. Guess which one is more valuable.” -Jon Westenberg

Every moment you spend being jealous is a moment wasted.

We don’t have much time in this world. The most successful and renowned individuals have often commented later in life how surprisingly fast it all went.

You don’t have time to be jealous.

If you constantly look to the actions of others, you rarely act like yourself. Your values and behavior have a harder time aligning, making you unhappy and empty.

“Personal incongruency is what causes so much of our pain. Not being you will destroy you.” -Tim Denning

Instead of wasting away in mediocrity playing the comparison game, choose to spend that time working on yourself instead.

I once heard being jealous and resentful is like drinking poison and expecting the other person to die. I thought that was an eerily accurate description.

One of the best pieces of advice I’ve heard on this topic was four simple words:

“Stay in your lane.”

Focus on you. Learn all you can. Experiment, fail, discover what works.

Soon, you’ll build momentum. And one day, you’ll look around you, and marvel at just how damn fast you’re going.

Cut out jealousy. Spend all your spare time learning and growing.

“If your lifestyle does not add to your healing, it will subtract from it.” -Benjamin Foley

Most people will stay in mediocrity.

They’ll continue fighting with the majority for average, subpar prizes.

It doesn’t have to be this way. The road that leads to an incredibly exciting, fulfilling life is waiting for you. It’s free and open, and there are no crowds.

Making the shift from an ordinary life to an extraordinary life is one of the most exciting decisions you’ll ever make. The learning, growing, and development on this path will make you feel more alive than you’ve ever felt.

Choose learning instead of entertainment.

Choose personal growth instead of jealousy.

Choose what you want, not what anyone else wants.

If you want to become extraordinary and become 10x more effective than you were before, check out Anthony Moore’s checklist.

Article is by Anthony Moore