This is an article from The Atlantic… Hint: not by discussing IQ The I here is James Fallows… although I tend to agree with him. this is a companion article to my previous article on self-esteem…

If you just want to know what people who are actually smart think of themselves… talk about themselves, jump there…
by James Fallows Jan 6, 2018 Science

I’ve never met or interviewed Donald Trump, though like most of the world I feel amply exposed to his outlooks and styles of expression. So I can’t say whether, in person, he somehow conveys the edge, the sparkle, the ability to connect, the layers of meaning that we usually associate with both emotional and analytical intelligence.

But I have had the chance over the years to meet and interview a large sampling of people whom the world views the way Trump views himself. That is, according to this morning’s dispatches, as “like, really re,” and “genius.”

In current circumstances it’s relevant to mention what I’ve learned this way. 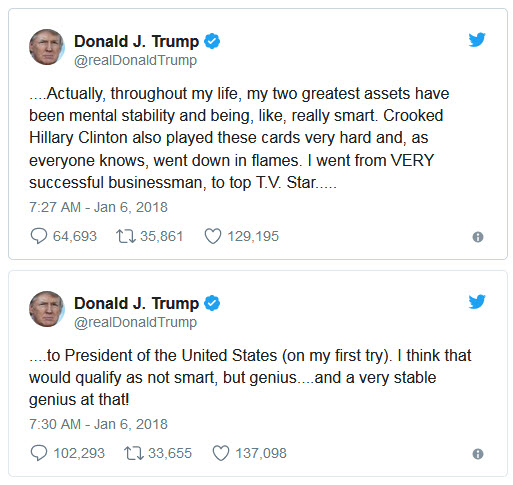 …I’ve interviewed people—Gates, Jobs, Musk, Page—whose names have become shorthands for their respective forms of brilliance, plus several more Nobel winners, plus others who are not famous but deserve to be.

Working at a tech company, I learned that some of the engineers and coders were viewed as just operating on a different plane: The code they wrote was better, tighter, and more elegant than other people’s, and they could write it much more quickly.

I’ve had the chance to interview and help select winners of fancy scholarships. Recently, in Shanghai, I interviewed a Chinese woman now in her early 20s who became the women’s world chess champion at age 16—and we were speaking in English.

If you report long enough on politics and public life, even there you will see examples of exceptional strategic, analytic, and bargaining intelligence, along with a lot of clownishness.


Here are three traits I would report from a long trail of meeting and interviewing people who by any reckoning are very intelligent.

They all know it. A lifetime of quietly comparing their ease in handling intellectual challenges—at the chess board, in the classroom, in the debating or writing arena—with the efforts of other people gave them the message.

Virtually none of them (need to) say it. There are a few prominent exceptions, of talented people who annoyingly go out of their way to announce that fact. Muhammad Ali is the charming extreme exception illustrating the rule: He said he was The Greatest, and was.* Most greats don’t need to say so. It would be like Roger Federer introducing himself with, “You know, I’m quite graceful and gifted.” Or Meryl Streep asking, “Have you seen my awards?”

They know what they don’t know. This to me is the most consistent marker of real intelligence. The more acute someone’s ability to perceive and assess, the more likely that person is to recognize his or her limits. These include the unevenness of any one person’s talents; the specific areas of weakness—social awkwardness, musical tin ear, being stronger with numbers than with words, or vice versa; and the incomparable vastness of what any individual person can never know. To read books seriously is to be staggered by the knowledge of how many more books will remain beyond your ken. It’s like looking up at the star-filled sky.

We can think of exceptions—the people who are eminent in one field and try unwisely to stretch that to another. (Celebrated scientists or artists who become ordinary pundits; Michael Jordan the basketball genius becoming Michael Jordan the minor-league baseball player.) But generally the cliche is true: The clearest mark of intelligence, even “genius,” is awareness of one’s limits and ignorance.

On the other hand, we have something known as the Dunning-Kruger effect: The more limited someone is in reality, the more talented the person imagines himself to be. Or, as David Dunning and Justin Kruger put it in the title of their original scientific-journal article, “Unskilled and Unaware of It: How Difficulties in Recognizing One’s Own Incompetence Lead to Inflated Self-Assessments.”

Odds are that the world’s most flamboyant illustration of this dangerous misperception, despite his claimed omniscience, would not even recognize the term, nor its ominous implications in his case.