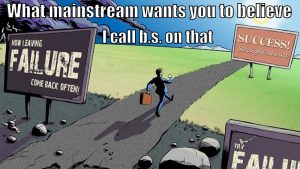 I have an older blog that is attacked by hackers every week. They install malware… so I don’t want you to go there…

It’s an old website, more than 10 years ago it was my main blog. Most of it is still useful. 1

I have started to move the old blog posts, one by one, to my yourvibration.com site.

One of those posts reminded me, that until you get what I am writing in it, your future will be much like your past.

While I was researching for pictures, I found that what I am teaching is against the mainstream ineffective, all in the visible… the mind is powerful type of teaching.

Reality, if you watch a person, reality doesn’t work the way THOSE people, those memes, those motivational speakers tell you it works. The nature of reality is that 90% of what moves anything or anyone, the CAUSE, is in the invisible/unconscious domain of life.

The distinction about repeating your past (or not) is this: What decides what you’ll do, who you’ll be is not the past, not what you know, not what you have, but the future you live into.

OK, this is a distinction from the invisible, under-the-water level of life:

Very briefly, this is how it works:

You live your life. Something happens. You say something about it… and that simple action files it into the future…

Of course you are unaware that you are doing it.

The language of what you say: I am never going to do this again… or I will just do this, and life will work.

You do that, and you are not conscious of it. The MIND creates these mini resolutions… many times a day. The MIND, the enemy.

Now, however old you are, you always think that you can change your life. You are certain. You did the work, you have skills, you are in my programs, and you will do it this time… for sure.

But turns out that the future you are living into is called HOPE.

It talks… You’ll remember… it says. It will turn out… it says. You can do it… it says

It sounds to you like a voice in your head, REASON, is telling you what to do.

But when it comes to doing, all that confidence turns out to be a mirage.

I had one of these just today. Last night I put my cold coffee dripper to work… I accidentally overfilled the water part. The voice said: you’ll notice it and remove the “hopper” tomorrow morning… you’ll see! For sure! You can!

Next thing I know the kitchen counter if flooded with coffee…

People who have been falling victim to that voice… No one will know… Just this one time… Oh, they have already said yes… Oh, he is such a great guy… Oh, I’ll just skip this step…

OK… you kind of get the picture, don’t you?

You know which one is your favorite way to self-immolate, self-destruct, to self-harming.

All kinds of invisible sub-structures “support” you in that direction. Rackets, primarily.

It seems that whatever energy supports staying the same is a lot stronger than the energy that would support growing, evolution, become all you can become.

Karl Marx said: Religion is the opium of the masses.

But there is more to religion than meets the eye. All that hope, all that waiting for miracle, all that thinking that because you said it it will be done. Ask and you’ll be given. blah blah blah…

Twenty years ago I said: There is no way I am going to be anything less than magnificent.

That has been the future I’ve been walking into, living into, leaning into like one leans into a wind.

That word, magnificent, sounds sooo good… but it doesn’t allow for ordinary feats… like doing my laundry, or listening to a coach who tells me what he had learned works.

As amazing that word is… I am just noticing that it has become my stumbling block.

It is time to invent a new future, further ahead, more open, more wholesome… So as I am leaning into that future, I can include doing all the things a magnificent person may feel below themselves.

My magnificence (lol) has been working against me the exact same way as your “I am smart” has worked against you. Or your “I am a victim”, or your “no matter what I do…” or whatever you have as your future you are living into.

In the Playground, starting tomorrow, we’ll dig these all up.

By invitation only… send me an email if you want to be considered. It’s $150… and I don’t know how long it will go, how many sessions.

OK, I just caught it: I have said that exact same sentence a few times before. Meaning: we’ll end when the job got done.

Here is yet another way “magnificent”, someone who will turn everything they touch into gold, is killing my life, killing my spirit.

So the course will go, probably, six sessions.

If you just want to recordings… let me know in the email. I’ll make a different price for you.

If you want to get access to the 53 videos (webinar recordings) of the 53 invisibles, including the racket, you can.

They are quite amazing, I hear.

You can’t re-distribute, re-package it… You are not buying resell rights!

It is best to get your starting point measurements before you start… unless you are just plain curious.