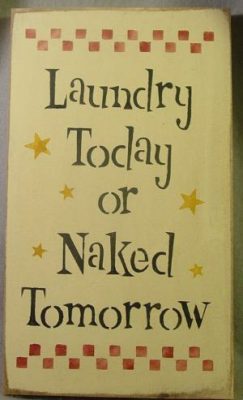 I should be doing some laundry. I have run out of socks… And anyways, I want to tame this beast of not doing my laundry.

I gather a load’s worth of stuff, carry it to the washing machine… and the distaste, the disgust is so strong… I take a beeline… and sit down by my computer.

Distaste, eh? Yeah, says muscle test. Disgust? yes. Was it always there? No. Was it from when i was 3? later… from age seven.

What was happening at age seven? I went to school. We had a live-in help: my mother was working on her Masters Degree, coming home around nine every night. My brother was about a year old… and was probably driving the live-in help bonkers.

And I recoil from dirty laundry…

I sit really quietly. The fear joins the distaste. I feel terror. I feel being beaten. Screamed at. Wrapped in wet sheets… Can’t breathe…

I must have wet my bed. I don’t remember. My body remembers. The fear, the disgust, the gagging.

Your impatience, your delusional self, your “the world should be according to my wishes” self abuses your child.

The body remembers… being forced showered… Every time I enter the shower the cringing, the fear, the pain is there… No wonder I don’t like to take showers.

Your child, your husband, your self is never what you expected, what your delusional self hoped for reality would give it. It feels it deserves more, and it forces things to fit, or punishes them for not fitting.

I don’t remember the incident… maybe incidents. You won’t either… the delusional self won’t let you. But both your body and the child’s body remembers.

The next generation of abusers is born. Congratulations.

I am watching this Korean Netflix series… Stranger.

The main character had an abnormal brain for which he underwent an operation. In the creator’s view, that is the only way he could have become “ego-less”… having no delusional self… and his world not be about himself, what he thinks is right, what he wants, what he fears.

Yeah, that is the world we live in: for someone to have courage, for someone to stand up against abuse, political and corporate power, one must be brain damaged… In Korea, or wherever in the world.

This is the kind of world we live in.

People send me $15 to do their Starting Point Measurements. You know what their Delusional Self says: for example: spiritualpro@whatever.com

All the numbers in the Starting Point Measurements match the humongous delusional self… that is anything but spiritual… of course.

It is incredibly hard for me to remain with A is A watching the different (normal brain) characters of that show. There is no driver other than ego, and the only time intrinsic value comes up when one gets caught… none of them add energy to actions… not at all. Going through the motions at best.

I am seeing self-starters and I am seeing people who need to be told what to do, when to do it…

I muscle test: do you need to have brain correction, brain surgery to become the new humanity? The answer is yes.

Maybe that is the function of the ever growing number of autistic children: they can cut out the ego and start becoming a human being.