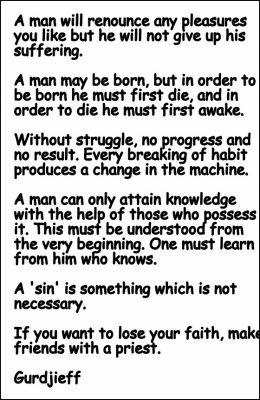 Why? Because you have all these amazing human abilities, but you don’t use them.

When I tell you to practice the Amish Horse Training Method, and I explain that the way it goes is that the Amish farmer ties the young horse in training to a pole next to a busy highway, and leaves it to deal with the noise of the highway for 30-60 days.

In the beginning the horse hears all the noises and considers them signs that he is in danger. But eventually he learns to hear them and not be threatened at all. They are not relevant to him or his safety. They are just vehicles making noise as they pass by.

The voices in your head, the voices of your colleagues, the voices of radio, TV, newspaper, most voices you hear are not relevant to you, and unless you train yourself to be able to tell, you are an untrained Amish Horse… a danger to yourself and the people who rely on you.

So, this is what I said.

But what do you hear? Indulge the voices. Argue with the voices. Obey the voices. Run from the voices. Love the voices. The variety of approximately listening is endless… And the Anna Karenina Principle applies here… again… only hearing what I say exactly and following it to the T will get you the result.

I could say that you are stupid… but I think it’s a racket. You get something out of doing things approximately. 1

I remember I used to be like that. Giving up my uniqueness felt like dying. Accepting becoming ordinary.  Gurjieff said it like this: A man may be born, but in order to be born he must first die, and in order to die he must first awake.

You can say: “no matter what I do… it isn’t getting me what I want.”

Or some other lie, similar to that.

I have been contemplating leaving teaching to others. Why? Because people’s racket, your racket makes it incredibly unrewarding to teach.

At the same time I learn to be more and more precise, catching what sinister way you’ll twist what I say into what it isn’t… So if I can just completely train myself to not give a flying f… whether you learn anything…

My hunch is that the training might be similar to the Amish Horse Training Method… you get a feedback, you get out of it what you need, and you leave the rest.

The problem as I see it is this: as a human I am subject to needs that include the kind of success one feels when one’s method produces the result one predicted.

Having a brain surgery would help, I think. (This part is tongue in cheek, but still worth saying and reading)

I finished watching a Korean Netflix series called Stranger. I really loved it. I loved it because of the main character whose emotional nature was cut off from his brain. I want to be like him. Life needs us to be like him most of the time, by the way. All the marker feelings we feel, despair, devaluation, competition, “love”, lust, hate, etc. are useless and render us miserable.

Being able to hear the noise as noise prevents marker feelings to be born 92% of the time… muscle tested. I have had two marker feelings in the past two days… not bad. I can live with that small amount.

But you have hundreds in a day. No wonder you get so tired. So fat. So ineffective. So sick.

Today I had the good idea to talk to my brother. My brother who is smarter than me, but discovered that I knew that just a few weeks ago.

I call him about once a month… I was complaining about how you listen… and suddenly I realized that I listened my coach the same way.

I am argumentative, I want to participate in the decision about my actions, instead of just meekly saying: “yes sir”… and do it. He called that my coach was “vain”… which, in English, I guess would be “having a big ego.”

Having someone tell you the truth, discuss the truth, help you see the truth about you is the biggest gift I can see anyone can give. I have never had a coach like that.

What a coach wants, what this coach wants is that you can win. That you can have what you want from life… as long as it’s ethical and moral.

And this coach is willing to do a lot for that, willing to cut you slack… but ultimately, unless you can hear what is being taught, exactly, I am 100% certain you won’t get it.

If we have a gap in world view, then most likely we won’t be a good match… because you won’t believe a word I say. Gurdijeff said: A man can only attain knowledge with the help of those who possess it. This must be understood from the very beginning. One must learn from him who knows. But as long as you feel you know better, you’ll listen approximately… and not learn anything.

Please tell the truth about that… so we can say good bye fast.