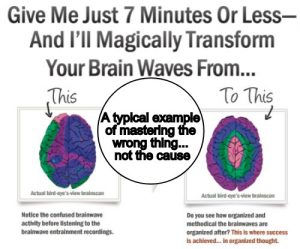 Everyone talks about reprogramming your mind or brain or whatever part they blame for your lack of success and lackluster life.

When Tiger Wood discovered that his swing that he trained and won with was actually limiting him, he needed to take time out to “reprogram” his body to do the swing differently.

If you try to program the brain while you keep the current programming, you’ll be like me… I was in an Israeli supermarket when this French lady came up to me and asked me if I spoke French. Yes, I said. Can you read the English instructions on this box in French for me?

I started to read it in French, I thought, but turned out I read it in Hebrew, or a mix of French and Hebrew: I could not even tell.

The memory of that fiasco stuck in my mind forever: this was 30 plus years ago.

So what do the “reprogram the mind” people do wrong that no one ever gets reprogrammed, and basically we are all screwed if we follow their teachings?

Before you can write something on a blackboard, and make it dominant, you need to erase what is already there.

Pam Ragland was trying to do this with her Quantum Thought Shifting… unsuccessfully? poorly? I don’t know. But the people who I knew and were in her program never changed a thing in their thinking.

A blackboard erased will not say blank for long. Because what was written on it wasn’t written by the owner of that brain, but by the voices and the memes.

Why am I teaching something that has nothing proprietary in it?

One could think that it is crazy to teach something that has nothing personal, nothing unique, nothing that only my students can do. But nothing would make me happier than having thousands of these “reprogram the mind” people teach the Amish Horse Training Method and the Memes…

What happens in those practices… those are practices… something that you do day in and day out, like in Zen you chop wood and carry water.

When the voices or the memes reach the conscious awareness, when they are brought out from the unconscious or semi-conscious domain, and they are viewed as voices and memes, not you, not yours, eventually you get desensitized, and disidentified with them.

The writing fades on the blackboard, and you can contemplate different ideas, different thoughts, experiments, different approaches, than the voices or the memes were shouting at you before.

You can read and the reading doesn’t immediately leak out of your brain that is too full of voices and memes. Now there is some space that new ideas can stick around. 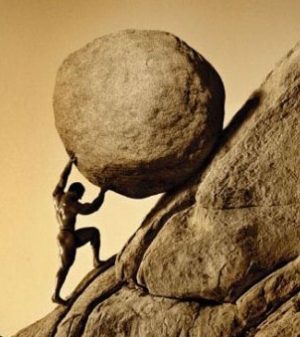 With the voices and the memes (The Amish Horse Training Method) method the steep mountain of Sisyphus gets ground down to a plane or a gentle slope, so the boulder can stay put, even when you go to sleep.

Before doing these processes myself, I woke up every morning hating life. Being jerked by shoulds, ought tos, and need tos.

Today my body shows signs of stress only from other people… And I wake up with an empty mind. I don’t have to… anything, I don’t need to… anything. What’s on my schedule for the day? I have it written down on my desk or my calendar. No rush, no drama.

But if you don’t identify the voices and the memes, you still wake up to their voices…

Even Werner Erhard used to put a big banner at the foot of his bed, saying in big letters “You don’t have to”

I have known a lot of successful people who went under fast. Something happened, a health threat, a marital discord, the birth of a child, the death of a parent, and the voices and the memes took over, and all the “reprogramming” was for naught: they went down.

One of the main reasons that even successful people don’t have a higher vibration is exactly this: They cultivated a programming intermingled with the already existing programming, the voices and the memes. Unless you erase the blackboard it takes all you have, and 24 hour vigilance, to stay successful. 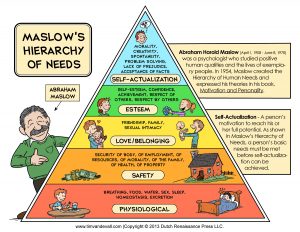 When you look at Maslow’s hierarchy of needs pyramid, they are still not able to enter the top of the pyramid because of the internal tug of war between the blackboard and what they are doing.

All the rising of your vibration happens in that top triangle of the pyramid. You cannot get there unless you erased the blackboard, unless you separated yourself from the voices and the memes.

You cannot even get to A is A, the second stage of my training, the power position of producers, or creators, unless you first clear the decks… erase the blackboard, and have silence in your head.

What is the difference between the voices and the memes?

The difference is only in the language they use.

Depending on your constitution, you are either resistant of non-resistant. If you are resistant, you have predominantly voices jerking you around. If you are not that resistant, than the memes that are gentle, and sound like your loving mother, or like a teacher, a priest, a sage… telling you how the world works, and what and how and why you should do what they say.

You need to attend to both… and you need to be aware of what is your constitution… so you can pay special attention to the bigger enemy.

There is a lot more to this new science of coming out of the cave (Plato’s cave) and starting to live and do in the new paradigm that is virtually invisible from the cave, except for the shadows.

In this morning’s Sunday rant I had a conversation of an hour and 40 minutes where I take this topic to the very end… Including what will ever make you come out of the cave… To start to live a live of a human being, instead of a cave dweller wholly dominated by the voices and the memes.

I wanted to sell the call to anyone who is interested, but Source say… Don’t do it.

Eventually I’ll have the call transcribed. It is so encompassing all my teaching that will stand the test of time. And then piece by piece, I’ll publish the parts that are OK to publish.

If you are a student already, you may ask for a buying link. I’ll make an exception for you. In fact, I want you to listen to the call. It will clarify a lot.