Or how to unite your two selves so you can stop hating yourself, punishing yourself, and be happy inside and out 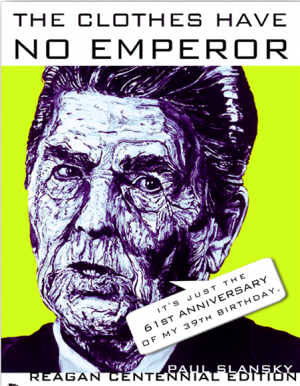 I had an insight this morning. I saw that every health issue I have ever had came from some idea, some thought, some teaching, not from my body.

Until age nine I was skinny. Then at that age I heard that whole grain is better for you… and I got promptly fat.

I have been hovering around 122 pounds when I heard from a student of mine about intermittent fasting. So I decided to do that. I promptly packed on three pounds. Nothing else changed…

All good ideas come from some mind, not your self. Your self is a lot smarter than you allow it to be. There is a separation between your mind and your real self. This article is to remove that separation, so you can be happy in all areas of life, physically, emotionally, mentally and spiritually.

I have set a rule for myself recently… and of course I violated it promptly… The rule is: if it sounds like a good idea: let it be a good idea. And stick with what is working. And if you must, test it… But make the experiment short and sweet.

Of course, if your mind doesn’t know about your body, can’t feel your feelings, then this method will not work very well for you. Because you’ll look in your mind… and the mind is a lying machine.

Let me sneak in a little bit of teaching… Physics… ugh… I’ll make it easy on you. It’s about vibration… The vibration you claim you want to raise.

When a singer holds a certain high tone long enough, glasses vibrate and then shatter. One could say they got into vibrational harmony… and vibrational harmony makes the glass, a rigid object with tight molecular bonds, cannot be flexible enough, so it disintegrates.

Bridges… bridges are sensitive to vibration, because bridges, with its arches, are like the string of a violin, have an innate vibrational point, that if matched, the amplitude of the vibration starts to grow, and eventually may collapse the bridge.

I have held power tools that threatened to shake my brain loose from my skull.

And, of course, vibration is also music. All musical notes are a vibration, a vibrational frequency. Some delight, some jar you awake, some irritate.

So why on earth are we using this word to measure someone consciousness?

Other words around vibration: resonate, and harmony.

What do you resonate with?

You resonate with, you are able to get into vibrational harmony with something that is like you. Not on the surface, mind you, but on the inside.

I am an empath. Like any ability, feeling your feelings, feeling your emotions can be honed, and can be made a weapon, a diagnostic tool, a healing instrument… not just the raw ability.

In a world of appearances, in a world with humans who all have two selves, the real self and the delusional self, an empath will not be popular. 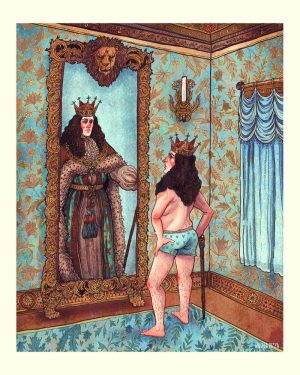 The Emperor Has No Clothes

Do you think the little boy who yelled: the king is naked, was popular? Everyone hated him. The king because he was naked, duped, and people laughed at him.

But all the courtiers, who followed suit, and shed their fancy clothes to fit in, to be in vibrational harmony with the stupid king, they were angry too.

And the tailors, who sold the scam were angry, because the money they got from the kings and the courtiers was real… and the fleecing of the rich ended… suddenly.

People, humans, have been duped and fleeced forever. Why do they let them be fleeced? 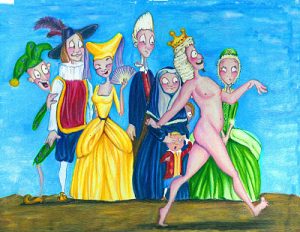 I have heard rich and famous people say: I have never had an original thought, everything I know I heard from others. 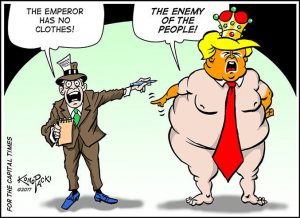 I understand. Even the rich is sheep, in some respect. Like those courtiers. Like the naked king.

When you fancy yourself holy, holier than others, you don’t want a little innocent kid yell out that you are naked.

The analogy, the comparison between you and the king is both true and flawed.

The flaw is that the king could get dressed any time, his king-ness won’t be effected.

YOU, on the other hand, cannot be viewed the same, you need to work on yourself to bring the two selves closer… or you’ll be forever this torn, angry, lost soul… pretending on one hand, and suffering and fretting and worrying on the other.

My work was, for years,to find a way to bring up your real self to the level of your delusional self. DNA activation, spiritual activators, an incredible amount of work and spiritual energy went into it.

That was a long experiment, and I have to confess that the experiment failed.

I have found that humans, you, are not willing to do the work it takes, to bring your real self up. You are not even willing to get in touch with it… because you hate it. You want to be that “higher” self, that pretend self, I call your delusional self.

Failure or not, the work is still the same: bring the two selves together, so they can embrace, so they can get into vibrational harmony, if you like that expression, so you can be one, and get great things done.

You see, as long as they are pulling in two different directions, you’ll never amount to much, because your energy is not strong enough to pull both selves in on direction, and stay that way.

Every night the imbalance rebuilds, and you start over again.

But in the shadow of the delusional self the real self gets no respect, no support, no energy.

It may even become like one of those dogs that lie down and whimpers, in Martin Seligman’s learned helplessness experiment.

You can choose learned helplessness and you also get mental slothfulness. These are in vibrational harmony with each other.

I have written quite a few articles on learned helplessness, because I really thought that we, humans, can be knocked awake. That if I put the label on us that is offensive… to me, then we will start exercising your growth muscles, and start growing.

And start to go from mental slothfulness to mental diligence… Countries where people read are happy or at least happier countries.

Happiness is when what you think, what you say, and what you do are in harmony. 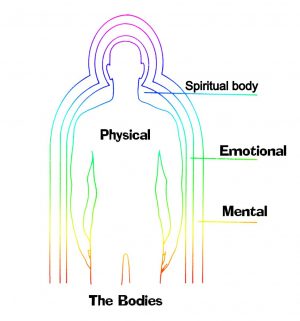 Actually, there is a better way to say the same: When your physical body, your emotional body, your mental body, and your spiritual body are in alignment, in vibrational harmony with each other, then you are happy.

And if you look within: are you happy? No, instead lots of smiling for the camera…

And I still don’t have a magical solution.

Why? Because mental slothfulness reigns the world. Because people are setting into easy and comfortable…

But growing isn’t easy and isn’t comfortable. It is actually occasionally painful. You have to go through many small deaths to become a butterfly.

There are all kinds of models of transformation, models of growth, models of becoming a human being.

I have tried most, and they really are disappointing.

When I ask Source to assist me in measuring your vibration, and other measurements in your Starting Point Measurements, to your surprise, Source measures your real self. The real you. And only relates to your puffed up, delusional self, in measuring the relationship of the two: your inauthenticity.

Recently I have retooled… and I am finding this new model a lot more effective than the previous ones.

People, who do the work, are popping.

The new model eases the tension between the two selves.

It takes off the burden for the delusional self to have to protect itself. So the natural self can breathe, and have some elbow-room… for many this, in an of itself, is a lot like happiness.

You know the joke where in hell the guy is taken around to choose which chamber he want to spend eternity. He happens upon a room where people are sitting around. He says: this looks like a good room. But the devil mercifully informs him that the people there are on break. What they do, when they are not on break, is breaking their own balls… 2

The new model, mercifully puts you on coffee break… so you don’t have to suffer. And then…

And recently, really recently, I have glimpsed a method to build a bridge between the still separated two selves.

It is work. But the delusional self won’t be so adamant against building it, because it is now building underneath, in the invisible, so it can save face.

Now someone can start reading, and practice increasing their awareness of what they are reading… their vocabulary, their attention. Widen their cone of vision… without ever having to confess to weakness in any of the arenas.

Work on the invisible.

I call that building legs underneath the delusional self.

Making it real, honest, instead of a flimsy front.

Benjamin Franklin never had to admit to being the opposite of those 13 virtues… he could build them in the invisible, and become a very successful man.

I actually don’t know any of these famous successful people… but I have a hunch that they must have done the same: built legs, built bridges under their considerable ambition.

For example, anger… anger is a burst of energy. Sustained anger is NOT anger, it is poison. But bursts of anger is useful.

NO feeling is sustained that is natural. The natural feelings are like a pump… it goes up and it comes down. Even hunger, even lust… They never last longer than a minute or two.

If you experience any natural feeling longer than a minute or two… then the feeling comes from the words that go around and around in your head… to push your buttons. To steal you away from your natural self.

Your delusional self lives in a cave. Humans invented a word for that cave. They call it mind. And then they decorate it… because they wholly moved in there.

But life happens outside the cave, and not inside.

The model I teach, the model one needs to work with, needs to practice, gets you out of the mind, and to reality, where you can make things happen. And where the two selves can meet and work together. In synergy.

To make things happen in reality. Where Health, Wealth, Love and Fulfillment lives.

And no matter how old you are, how young you are, you can start living. In earnest.